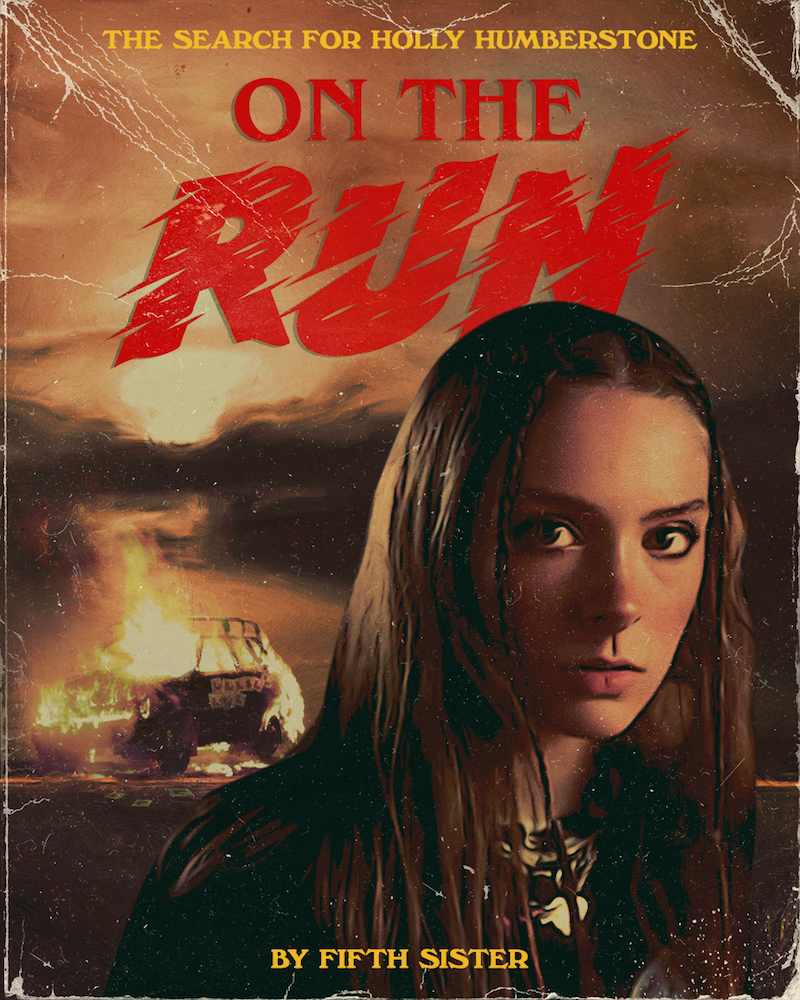 Holly Humberstone is a talented singer-songwriter from Grantham, England. Not too long ago, she released a captivating 15-minute short film, entitled, “On The Run.”

“This film pretty much sums up how I’ve been feeling this year. At times I’ve just wanted to run away and get the hell out of here. I make all my videos with the same team and we thought it would be cool to follow on from the ‘Drop Dead’ video where I set fire to my dad’s car and the ‘Overkill’ video of me on the run through the woods at night with my guitar. What better way to bring ‘Falling Asleep At The Wheel’ EP to a close! If you listen closely there is the tiniest bit of a new song tucked away in the film too.” – Holly Humberstone stated

‘On The Run’ documents the story of Holly Humberstone’s first body of work. The Raja Virdi & Josh Sanger-directed film was shot in a few takes in a paper mill in the Midlands, close to Holly’s hometown of Grantham. The camera follows Holly through a haunting performance that is both delicate, can-hear-a-pin-drop, to expansive, headline moments. With the script written by Holly herself, the 20-year-old singer songwriter’s home has been at the heart of her songwriting and visual collages. Also, the film takes viewers on a unique journey through her critically acclaimed debut EP, entitled, “Falling Asleep At The Wheel.”

Not too long ago, Vevo named Humberstone as a DSCVR Artist to Watch for 2021. DSCVR Artists to Watch is Vevo’s coveted list of the top 20 artists poised to break out next year, with past alums to the program including the likes of Billie Eilish, Lewis Capaldi, Sam Smith, Maggie Rogers, Sam Fender, James Bay, Jorja Smith, among many others.

“I wrote this song a while ago. While still unsure of who I wanted to be and where I wanted to head musically. Writing this song was probably the first time I felt like I knew who I was within the music I was making.” – Holly Humberstone stated

Holly Humberstone’s accolades are far-reaching for an artist so young. Earlier this year, she was hand-picked to be a part of Vevo’s DSCVR At Home series. She has proven herself a transcendent talent in the span of just a few months. Recently, she was chosen as Apple’s Up Next Artist following in the footsteps of Billie Eilish and BENEE. Also, she performed on Jimmy Kimmel! Live and sold out three headline shows at Omeara. Subsequently, she has gained a reputation for extraordinary, intimate live performances during the lockdown.

‘Falling Asleep at the Wheel’ has already amassed well over 50 million streams. The project blends Holly’s dark and moody sound with honest lyrics and refreshing candor. Also, the songs embrace and translate some of life’s most intense feelings. In a way that typical conversations all too often fail to capture. The EP contains themes of mental health struggles to the dizzying feeling of falling for someone for the first time. Although her story might have just begun, Humberstone’s unstoppable rise of success will make you want to have been there since the start.

Holly Humberstone is hands down one of our Top 5 most favorite artists to listen to right now. Therefore, we recommend adding songs from her “Falling Asleep at the Wheel” EP to your personal playlist. Also, let us know how you feel in the comment section below. Peace.