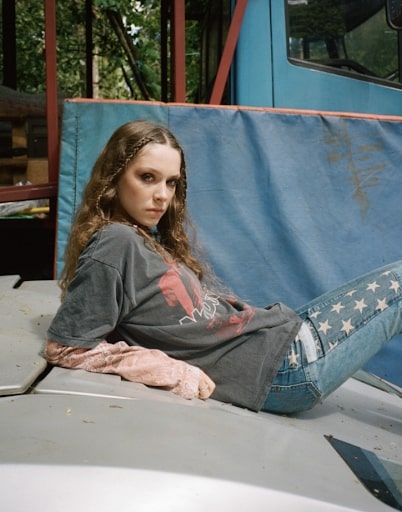 Holly Humberstone is a rising singer-songwriter and musician from Grantham, England. Not too long ago, she released a cinematic music video for her “Scarlett” single.

“Sonically and lyrically, ‘Scarlett’ breaks away from the rest of the EP, and in so many ways it feels like such a release. It was really important to me that the music video felt really empowering and a reminder that you can shake off anything rubbish going on in your life and be in control of your own destiny. Obviously, the song is about Scarlett so she had to be in the video – especially after being named an ‘emotional grim reaper’ lol.

The two of us break into an airport hangar, steal and spray paint an arctic truck, then I perform on the back of it as Scar drives it down the runway. It was honestly the most fun. I was clinging on as I was being thrown about. If you look closely the guitar I throw off the truck is the same one from my very first video for ‘Deep End’ and the banners were at my London shows at Omeara! I really hope it feels as empowering to watch as it did to be on the back of it performing! Loved how ironic the bad British weather line is when we got the nicest sunset going for the video. Hopefully that truck makes another appearance down the line.” – Holly Humberstone explained

The Raja Virdi-directed video features Holly Humberstone on the back of a moving semi-truck. She’s performing while her best friend Scarlett drives them both at 45 miles per hour down an empty airport runway. The visual encapsulates the freedom and empowerment you feel after leaving a toxic relationship. Holly continues to push the envelope as she does all of her own stunts. Whether it be walking on a flatbed of a moving truck or crawling through air vents that are aflame, she makes sure to match the energy of each of her songs with music videos that are both cinematic and evocative. 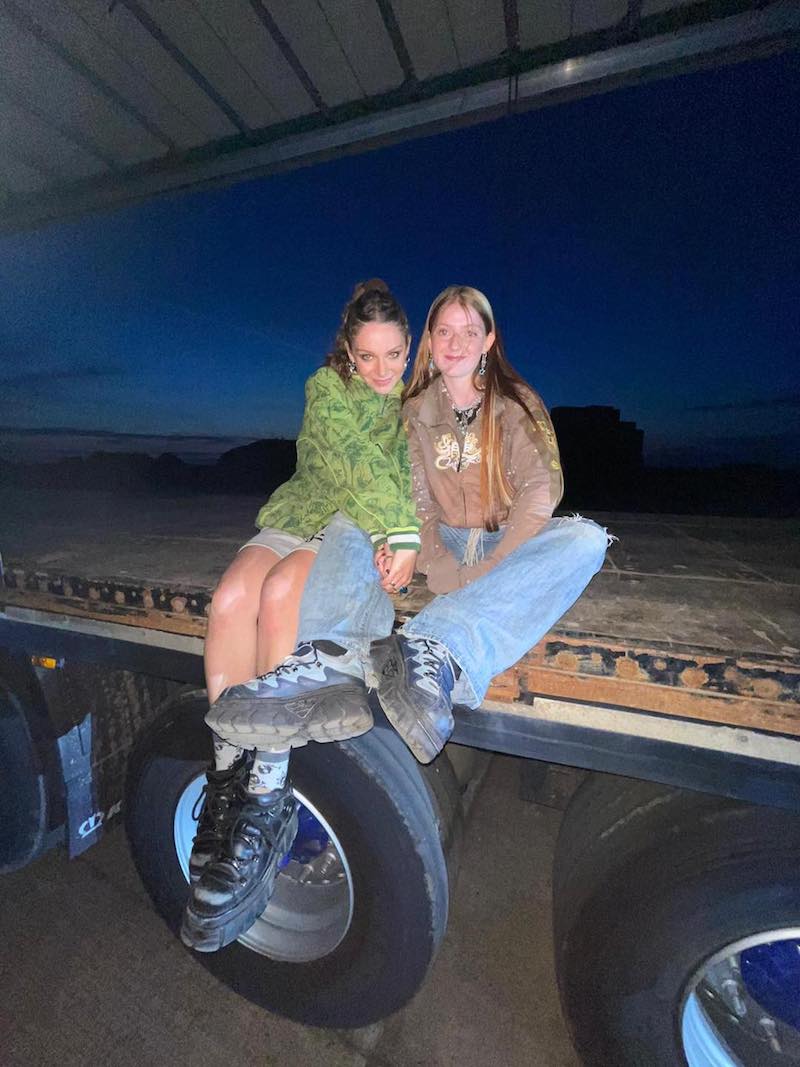 “This track is my absolute favorite. It’s a f*** you to the guy that was going out with my closest friend, Scarlett. It was written as they were breaking up. Also, the relationship was totally one-sided and lasted for years. Scarlett was all in and had pretty much planned their future. And it was pretty clear to me that he was stringing her along until he broke up with her in a really insensitive and heartless way. I was her closest confidant so I knew everything she was feeling. And I’d see how passive he was with her at parties first hand.

She vented to me for probably about a year so I went through all the stages of a break up with her. And I watched as she slowly realized her worth and that he wasn’t worth her tears anymore. I wanted to write this one from her point of view. It’s a pretty positive song as it’s about her finally letting go, realizing his many faults and taking back her life.” – Holly Humberstone explained 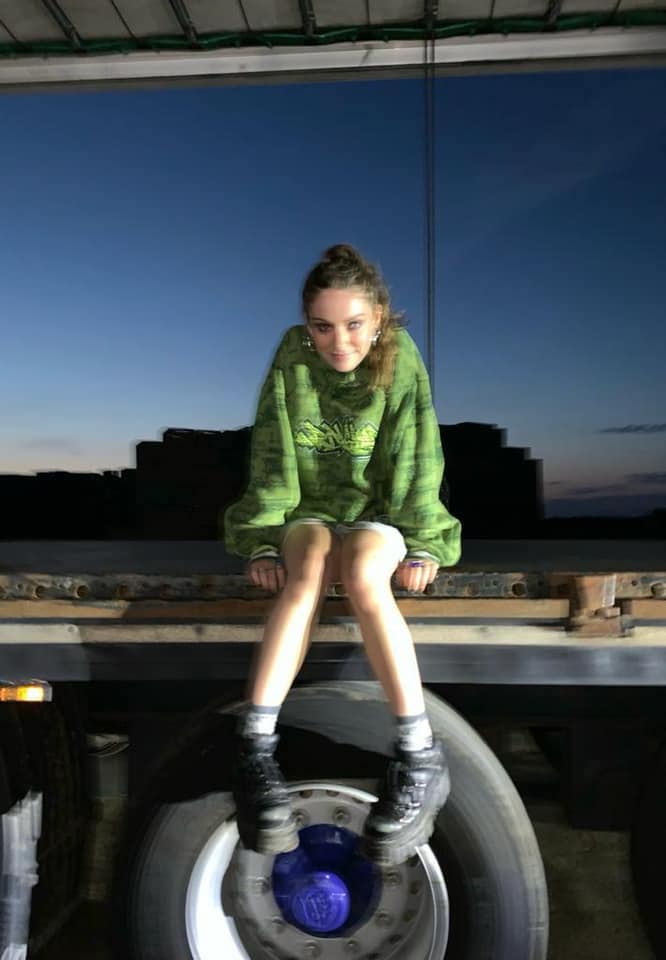 ‘Scarlett’ is a tipping point of sorts. The song conveys the end of a toxic relationship where all you have left to hold onto is false hope. Balancing a polarity of buoyant melodies and cutting lyrics, the song provides the sensation of feeling like you’re constantly chasing someone who is always just out of your reach. It’s a milestone track for the rising talent.

Furthermore, “Scarlett” is the latest offering from Holly Humberstone’s highly anticipated second EP, entitled, “The Walls Are Way Too Thin,” produced by long-time collaborator, Rob Milton. Darkroom, Interscope, and Polydor Records will release the project on November 5, 2021. The six-track EP features her recently released song, “Please Don’t Leave Just Yet,” co-written and co-produced by The 1975’s Matty Healy. As well as the incredibly emotive first single, “Haunted House,” and title track, “The Walls Are Way Too Thin.” This EP marks an evolution for Holly in which loss accompanies growth, and figuring out who you are – means – figuring out who you’re not.

Holly Humberstone – “The Walls Are Way Too Thin” EP 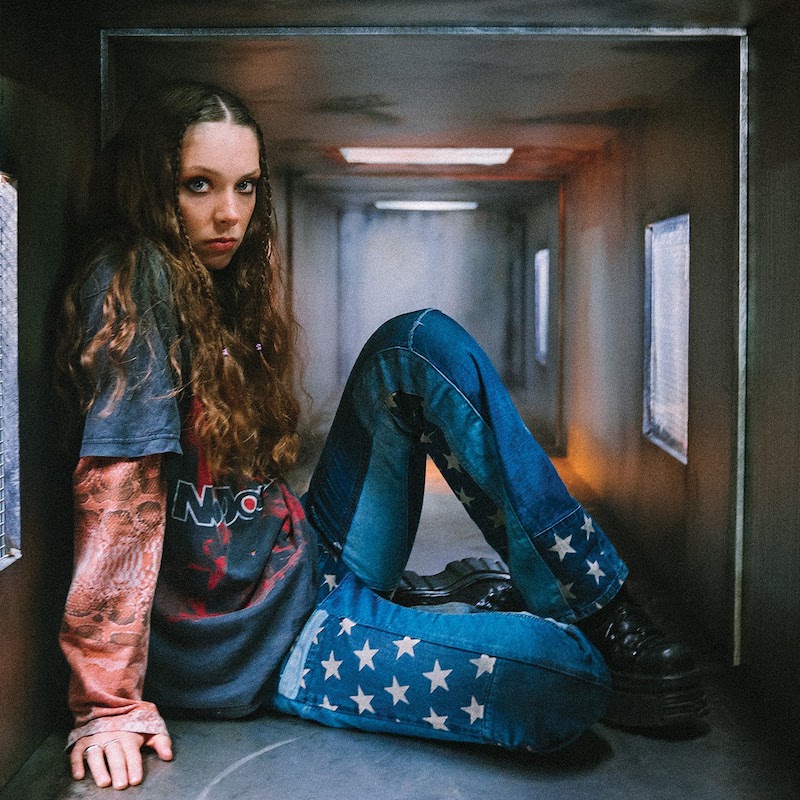 “This EP represents a feeling of being lost. It’s the kind of loss that makes you question who you are and where you belong. So lost that someone might need to find you again because you can’t find yourself. That’s how it felt to move to Liverpool, then London, and be in transit between cities and never settling.” – Holly Humberstone explained

Not too long ago, Holly announced her first-ever US-tour dates, kicking off in October. Having sold out her first two shows in under three minutes, she added second dates at The Roxy Theatre in Los Angeles on October 6th and The Bowery Ballroom in New York City on October 10th due to popular demand. Please visit Holly’s website for ticketing information.