Vevo, the world’s leading music video network, released its annual year-end look back on music video viewership. Within this wrap-up, Vevo has shared its most-watched music videos and artists of 2022 globally and in the U.S. As well as the trending music videos, sought after during key moments throughout the year, from TV series and film premieres to major artist news and sporting events.

In Vevo’s Global Top Ten Music Videos chart, Karol G’s “PROVENZA” video comes in first place with a massive 547 million views worldwide. “PROVENZA” was the star’s highly-anticipated solo single released in April after a seven-month break, and was a self-described “completely new audiovisual project” for her that explored a significantly more tropical sound. The music video features an all-female cast and messages of empowerment and body positivity.

“We Don’t Talk About Bruno (From ‘Encanto’)”

“We Don’t Talk About Bruno (From ‘Encanto’)” takes the No. 2 slot, with 503.4 million views, followed by Shakira and Rauw Alejandro’s “Te Felicito”, with 415.9 million views. Harry Styles’ “As It Was” is at No. 4 with 375.5 million views, and Karol G and Maldy’s “GATÚBELA” closing out in fifth place, with 202.3 million views. Latin music continues to be a global sensation, with many of the top ten global music videos being classified in this genre. 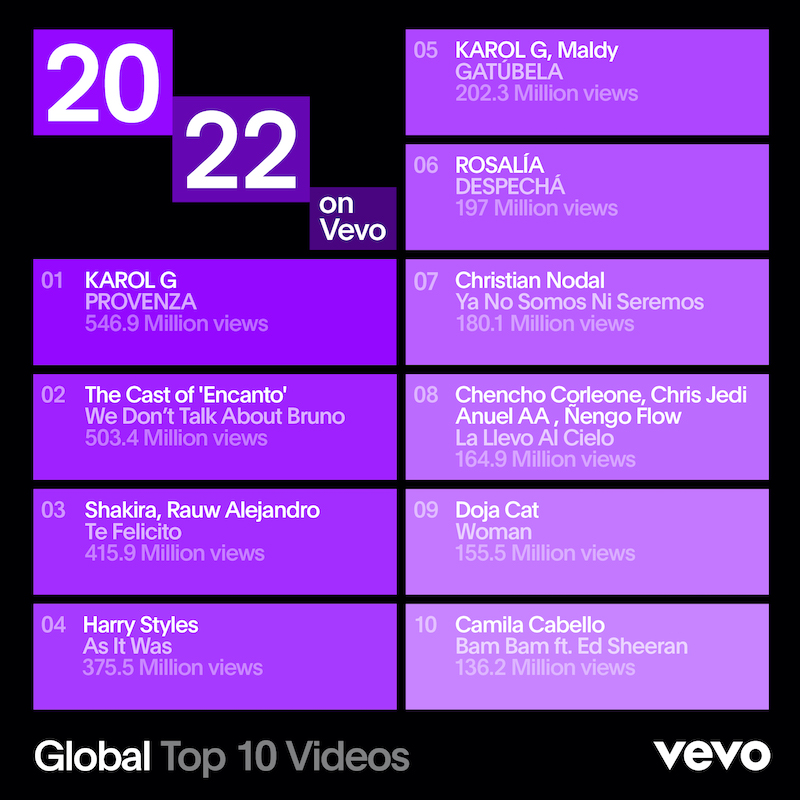 “Vevo is the music video destination for fans to discover and connect with artists of all genres and career stages. Seeing who and what has resonated with audiences at such a massive scale is nothing less than fascinating, because these annual insights create a snapshot of what’s trending and current in music, as well as what’s happening in pop culture overall. Fans come to Vevo to connect with their favorite artists, who shape everything from language to fashion to today’s social conversations – often through music videos. For artists, there are also key learnings for their creative and release strategies.

Music videos remain a critical tool for them to break through in a quickly evolving entertainment landscape, where capturing and sustaining attention to build fandom is the foundation for success. We applaud this year’s top artists for their boundless creativity, top-notch collaborations, and ability to engage fans both new and existing. We are not only privileged to host such star-powered content on the Vevo network, but we’ve been lucky enough to work directly with many of these artists through our original content franchises, which provide additional ways to both grow and maintain a deep connection with fans. Sending out a huge congratulations to all of those who charted. We look forward to seeing your continued success.” – stated JP Evangelista, senior vice president of content, programming, and marketing at Vevo

Vevo’s Top Global Artist of 2022 is reggaeton trailblazer and Vevo Official Live Performance alum Karol G, with a staggering 2.76 billion global views. The No. 2 slot is Shakira with 2.49 billion views, followed by The Weeknd at No. 3 with 2.24 billion. Taylor Swift enters the chart at No. 4 with 2.09 billion views, while Eminem comes in at No. 5 with 1.75 billion.

Vevo’s U.S. Top Viewed Videos chart includes multiple first-timers, including Kay Flock, SleazyWorld Go, and Vevo Artist to Watch, GloRilla. “We Don’t Talk About Bruno (From ‘Encanto’)” kicks off the U.S. chart at No. 1, with 240 million views, Lil Baby’s “In A Minute” comes in at No. 2 with 74.5 million views. Global chart-topper “PROVENZA” by Karol G is third with 68.5 million views. Lil Baby makes his second chart appearance with “Right On” at No. 4 with 49.6 million views, followed by Harry Styles’ “As It Was” with 46.4 million views. 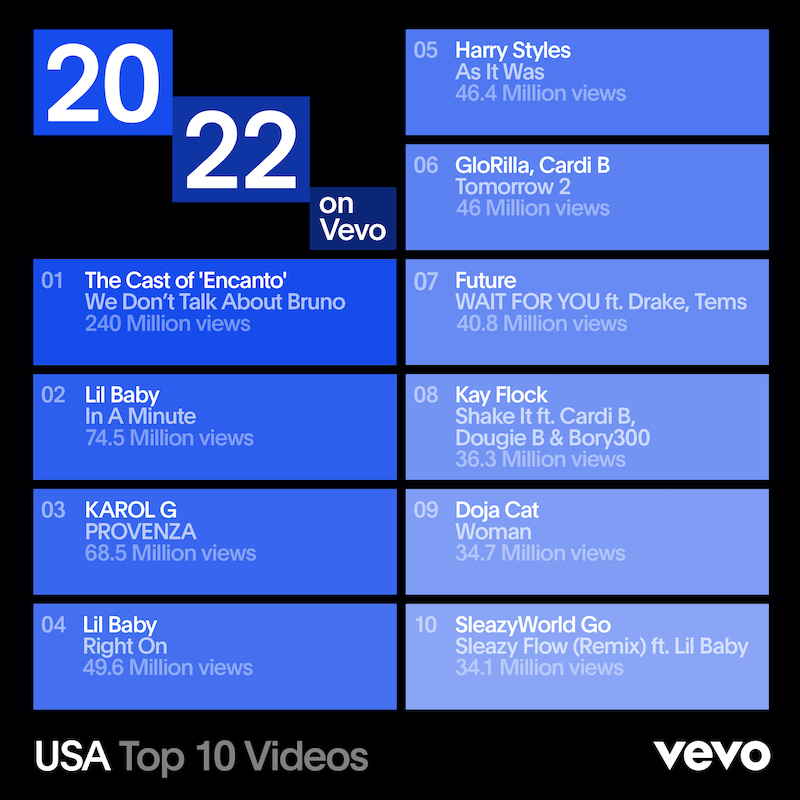 On TV, the long-awaited premiere of HBO’s “Euphoria” Season 2 had fans visiting its stars’ music videos. Lead actress Zendaya saw almost 5x the average views for her 2013 track replay. New cast member Dominic Fike saw a 247% lift in views of his catalog. Lead composer Labrinth saw a 241% lift for “All For Us” and almost triple the views for “Still Don’t Know My Name.”

Looking at film premieres this year, the debut of “Top Gun” Maverick” drew in a 370% lift in views for Kenny Loggins’ “Danger Zone.” The following month, during the opening weekend of “Elvis,” videos for “If I Can Dream,” “Can’t Help Falling In Love,” and “Jailhouse Rock” saw a 200% to 400% lift in views. Additionally, Nirvana’s 1991 deep cut “Something in the Way” exploded in views 33x thanks to its feature in the Robert Pattinson-led “The Batman” film.

From the likes of Taylor Swift to Rihanna, 2022 was a year of big artist comebacks. When Beyoncé dropped her “Renaissance” album in July, already one of the year’s biggest releases, collaborator Big Freedia’s catalog saw a 189% lift in views.

In 2022, we said goodbye to a number of beloved artists, and fans celebrated their legacies by watching their music videos. On January 20th, fans mourned the passing of Meat Loaf, and the singer’s catalog saw a tenfold jump in views, with “I’d Do Anything for Love (But I Won’t Do That)” seeing 38x its usual U.S. views.

As fans paid homage to legendary drummer Taylor Hawkins, who passed away in April, the Foo Fighters saw a 769% lift in catalog views, including greatest hits like “Everlong” (+413%) and “The Pretender” (+424%).

In August, upon the passing of Olivia Newton-John, the artist’s catalog saw a 37x lift in views across Grease, Physical, Xanadu, and more. In September, hip-hop fans across the globe took a trip back to “Gangsta’s Paradise” (416% lift in views) in remembrance of rapper Coolio. Upon the news of rapper Takeoff’s death, Migos’ catalog saw an 8x jump in views, and Quavo & Takeoff’s catalog saw 13x its usual views. 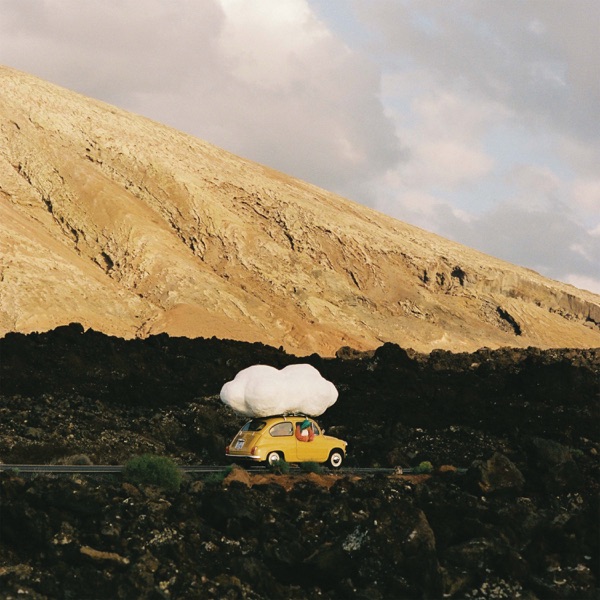 We recommend adding Karol G’s “PROVENZA” single to your favorite Urbano Latino playlist. Also, let us know how you feel in the comment section below. Mel Blanc’s famous catchphrase, That’s All Folks! Thanks for reading another great article on Bong Mines Entertainment – the hot spot for new music. Always remember that (P) Positive, (E) Energy, (A) Always, (C) Creates, (E) Elevation (P.E.A.C.E). Contact us on social media via Twitter, YouTube, Instagram, or Facebook, and let us know what’s going on. Disclaimer: This post contains affiliate links. If you make a purchase after clicking a link, we’ll collect a share of sales or other compensation.