FKA twigs is an award-winning singer-songwriter from Cheltenham, England. Not too long ago, she released an appealing music video for her “Tears In The Club” single featuring The Weeknd. The video was directed by Amber Grace Johnson (Rihanna, J. Cole, Kali Uchis).

FKA twigs – “Tears In The Club” video feat. The Weeknd

‘Tears In The Club’ tells a heartfelt tale about a young woman who wants to therapeutically drown herself and her tears inside the loud music being played by a club DJ. Apparently, she’s trying to get away from her significant other, but she can’t seem to eradicate him from her mind, body, and soul. No matter where she is—with her friends in a club, on the road, or by herself—there’s no escaping his love. Later, he tells her, “Unload your emotions, baby. You’ve been suppressing (your) emotions. There’s no escapin’ me.” 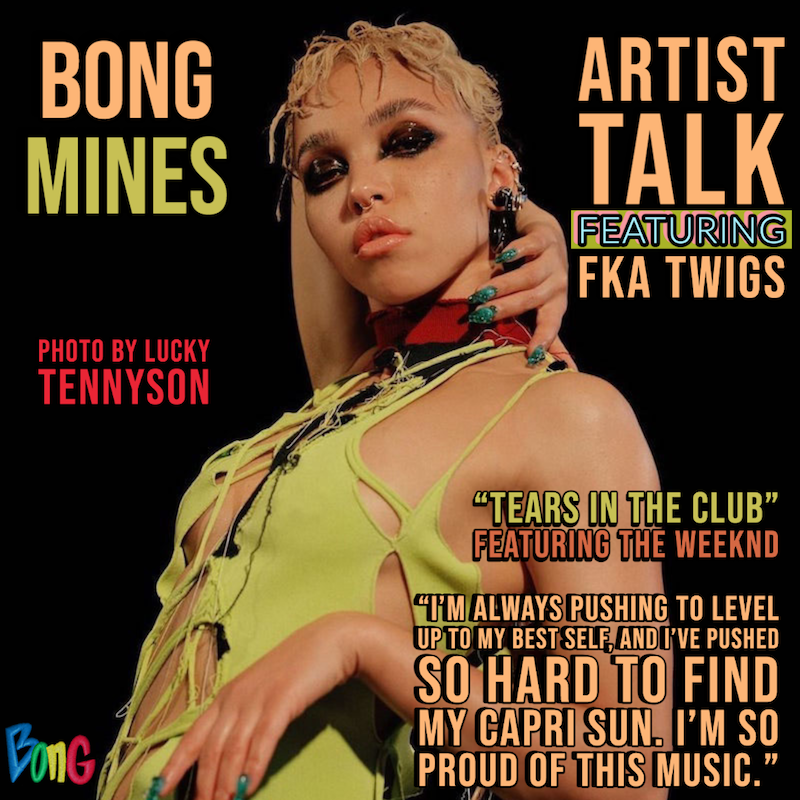 ‘Tears In The Club’ contains a relatable narrative, ear-pleasing vocals, and tuneful melodies. The likable tune (produced by Cirkut, Arca, and El Guincho) possesses melodic instrumentation flavored with contemporary pop and dance elements. Furthermore, “Tears In The Club” serves as a tasty appetizer to what listeners can expect to hear on FKA twigs’s upcoming mixtape, entitled, Capri Sun, set to be released on January 14, 2022.

“I told the universe I’m gonna f*** your lies, then cut all ties and get high as a satellite.”

“I’m always pushing to level up to my best self, and I’ve pushed so hard to find my Capri Sun. I’m so proud of this music.” – FKA twigs stated

‘Tears In The Club’ marks an evolution and expansion for FKA twigs, who continues to thoughtfully push at the edges of her art. Her releases have established her as one of the most innovative artists, performers, producers, and directors of her generation. To date, she has released three EPs (EP1, EP2, and M3LL155X) and two albums (LP1 and Magdalene). MAGDALENE, “named one of the best albums of 2019,” received a GRAMMY Award nomination for “cellophane” as Best Music Video.

FKA twigs has taken a complete approach to every facet of her art and career. Not too long ago, she was honored with a Webby Special Achievement Award for her “incredible contributions to digital culture and for constantly using the internet to create and distribute experimental art.” She’s directed and starred in campaigns for Nike, Google Glass, Calvin Klein, and Apple, and made her big-screen debut in Honey Boy.

“Tears In The Club” single

We recommend adding FKA twigs’s “Tears In The Club” single to your favorite contemporary pop playlist. Also, let us know how you feel in the comment section below. Mel Blanc’s famous catchphrase, “That’s All Folks!” Thanks for reading another great article on Bong Mines Entertainment – the hot spot for new music. Furthermore, always remember that (P) Positive, (E) Energy, (A) Always, (C) Creates, (E) Elevation (P.E.A.C.E).