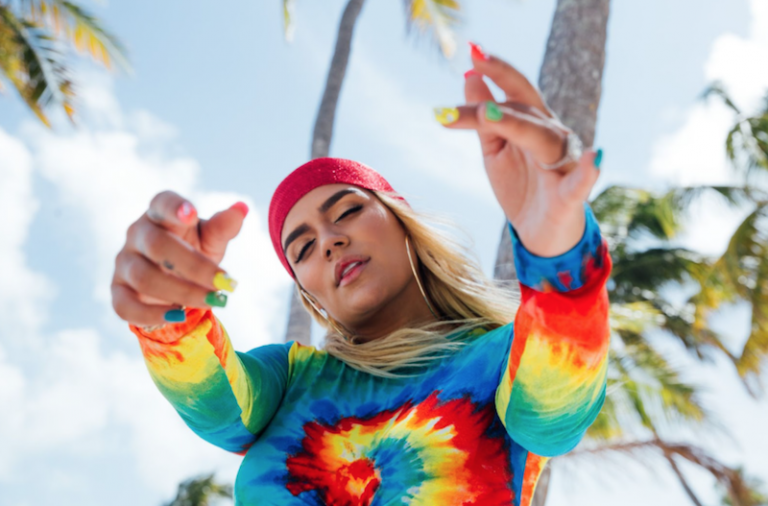 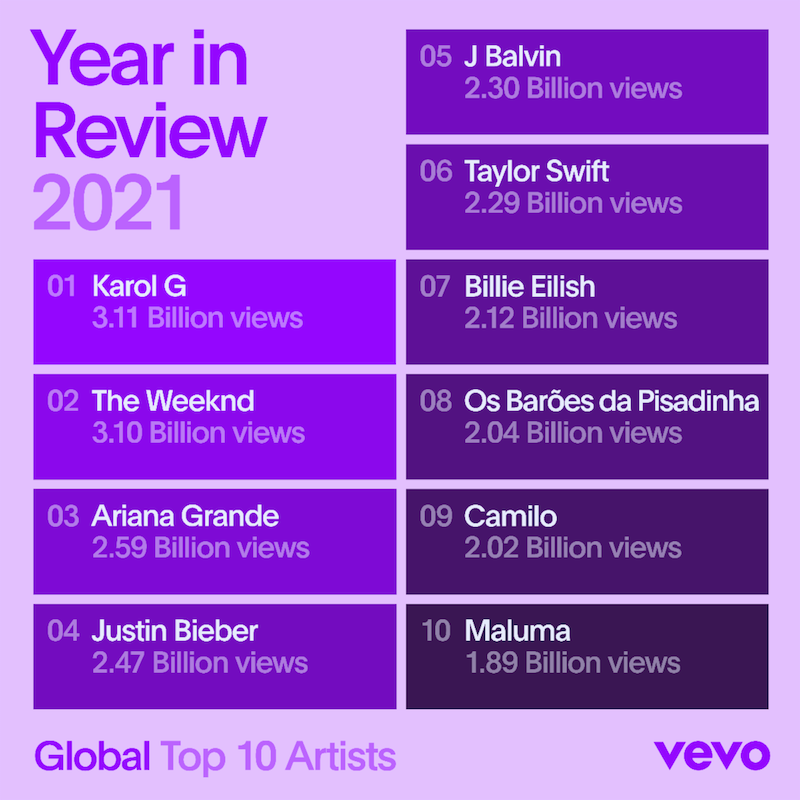 Both in the U.S. and worldwide, Lil Nas X secures the top spots in the Vevo Engagement Chart, which ranks videos according to the most likes, shares, and comments across the Vevo network. “MONTERO (Call Me By Your Name)” was #1, with “INDUSTRY BABY” featuring Jack Harlow in the second spot. Lil Nas X’s success can be attributed to his consistently creative releases and imaginative marketing efforts – such as his sneaker launch in partnership with art collective, MSCHF, ahead of the release of the MONTERO album, which drove the viewership of Lil Nas X music videos six-fold.

Another notable mention is singer-songwriter, Olivia Rodrigo. She has grown her viewership 8x to 357 million views in the U.S. in 2021, after breaking into the mainstream with her debut album, SOUR. 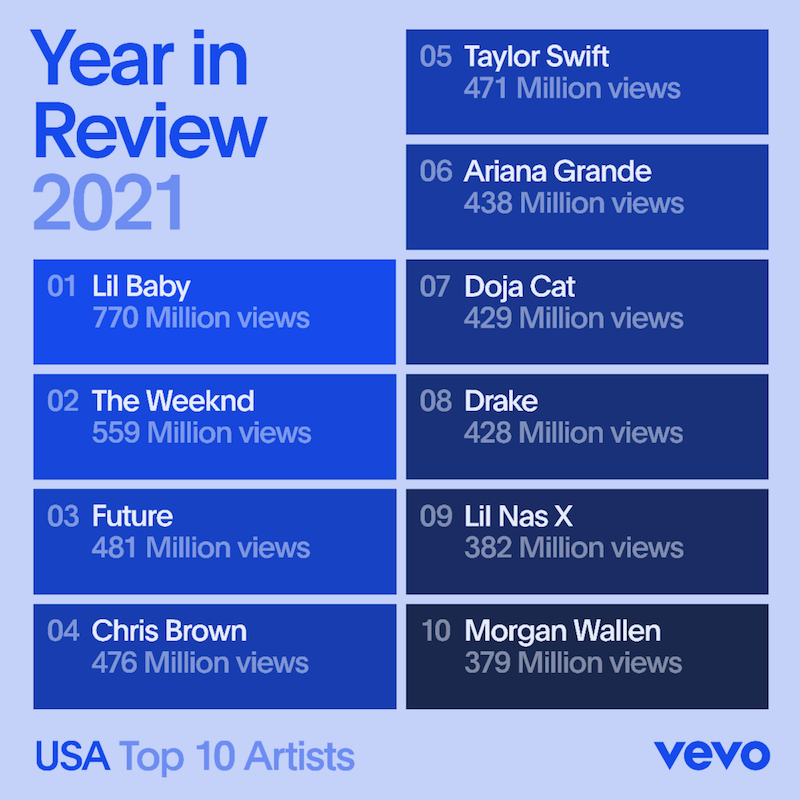 “Vevo is the music video destination for artists of all genres and career stages. Our charts feature established stars such as Taylor Swift and Future and newer names who also made big headlines this year like Lil Nas X and Olivia Rodrigo. In 2021, fan consumption and engagement with music videos continued to yield many insights about the vital nature of the music video in driving, shaping, and reacting to cultural moments. And artists such as The Weeknd, Doja Cat, and Ariana Grande collaborated with Vevo to further develop their visual catalog and storytelling through Vevo’s original content series such as LIFT and Official Live Performances.” — said Alan Price, Chief Executive Officer, Vevo

Music videos served as soundtracks to events throughout the year. Here are some of the top pop culture moments and themes of 2021 through Vevo’s music video viewership.

This summer was marked by celebrity romances. Jennifer Lopez saw U.S. viewership lift following news reports of her rekindling with actor, Ben Affleck. In 2009, he appeared in Lopez’s “Jenny from the Block” music video.

In September, viewership of Machine Gun Kelly’s “Bloody Valentine,” starring actress Megan Fox, doubled in the U.S. after he and Fox hit the VMAs red carpet.

Big Artist Returns in the Fall

During the fall, there were several new recordings from beloved artists such as ABBA, Adele, and Taylor Swift. In October, Vevo saw Adele’s catalog trending following the announcement of her new studio album, 30, with a 10-fold lift in views. Also, her  “Easy On Me” single generated engagement with fans, becoming the #7 most-engaged-with Vevo music video of 2021 in the U.S.

That same month, ABBA announced a reunion and their first new album in 40 years. Their hits, “Dancing Queen” and “Take a Chance on Me,” saw a 170% lift in U.S. views.

In November, Taylor Swift’s catalog also jumped 5x as she released “All Too Well (Taylor’s Version),” the first 10-minute song to reach #1 on the Billboard Hot 100.

Fans turned to music videos to remember rappers DMX and Young Dolph, who passed suddenly this year. In April, DMX’s music video catalog saw 19x its usual viewership in the U.S. Particularly around “I Miss You” (210% lift) and “Slippin’” (200% lift).

Young Dolph’s catalog saw a 550% lift in the U.S. following his tragic shooting in November.

The increasing popularity of social media platforms such as TikTok and Instagram fostered the discovery of new music in 2021, in turn driving the search and viewership of music videos on Vevo. This was especially evident in reviving music videos from years, and even decades, prior, bringing previously-released music videos to new audiences in 2021.

Coupled with this, consumers are increasingly seeking out and enjoying nostalgic content, evident in Vevo’s decades-based linear TV channels, such as Vevo 70s, Vevo 80s, Vevo 90s, and Vevo 2K, which consistently deliver high viewership. Older hits such as Boney M.’s “Rasputin (Sopot Festival 1979)” (270% lift), and Earth, Wind & Fire’s “Let’s Groove Tonight” (580% lift), are also examples of music videos from prior decades that have made a comeback in 2021 in the U.S., particularly via TikTok dance challenges by younger generations.

More data and trends from Vevo’s 2021 review will be released later this month. Also, Vevo identified and analyzed music video viewership spikes from the end of 2020 through December 2021. They compared the current two-week rolling average vs. the prior two-month rolling average. The dates of these spikes were then matched with the current events – and the developments that drew viewers to these music videos.

In the comment section below, let us know what are some of your favorite music videos of 2021. Mel Blanc’s famous catchphrase, “That’s All Folks!” Thanks for reading another great article on Bong Mines Entertainment – the hot spot for new music. Furthermore, always remember that (P) Positive, (E) Energy, (A) Always, (C) Creates, (E) Elevation (P.E.A.C.E).