Tate McRae is an emerging singer-songwriter and dancer from Calgary, Canada. Not too long ago, she performed a stripped-down version of her “she’s all i wanna be” single LIVE via Vevo DSCVR.

“You want someone you can show off whenever you go out. She’ll wear a tight mini black dress with all her friends around and then you’ll probably spend the night at her nice big house. And by then I’ll just be someone you’ve forgotten about. If you say she’s nothing to worry about, then why’d you close your eyes when you said it out loud? Stupid boy, making me so sad – didn’t think you could change this fast.” – lyrics

‘she’s all I wanna be’ tells a heartfelt tale about an insecure young woman who realizes that she can’t compete with her significant other’s new love interest because deep down she wants to be like her. Apparently, this other woman has everything that she doesn’t have like a small waist, natural beauty, the perfect smile, a big house, and access to a brand-new car. Therefore, she tells her companion in a concerning way, “You tell me I shouldn’t stress out, say, ‘It’s not that hard. But I just got a feeling this will leave an ugly scar.”

Tate McRae’s Vevo performance for “she’s all I wanna be” follows her previous released Vevo Studio Performance of “feel like sh*t,” and her 2020 performance of “happy face” and “all my friends are fake” for Vevo’s DSCVR series. Not too long ago, she released an appealing music video for the original version of her “she’s all I wanna be” single, inspired by the dance film, “Chorus Line.”

“If you say she’s nothing to worry about then why’d you close your eyes when you said it out loud?”

Tate McRae has accumulated over three billion career streams, over 700 million video views, a #1 Top 40 hit, and multiple #1 dance hits. She has also made a name for herself as a competitive dancer placing as the second runner-up on Season 13 of the FOX series, So You Think You Can Dance. Shortly afterward, she achieved the “The Best Dancer” honor three times at the prestigious Dance Awards and hit the stage for performances on Ellen and The Teen Choice Awards.

Following the success of her #1 multi-platinum-selling single, “you broke me first,” Tate collaborated with Khalid on “working,” DJ Regard & Troye Sivan on “You,” blackbear on “u love u,” and Jeremy Zucker on “that way.” She capped off 2021 with the release of “feel like sh*t,” and was listed on Forbes 30 Under 30, as the youngest musician on the list at just 17-years-old.

Tate McRae – “she’s all i wanna be” single 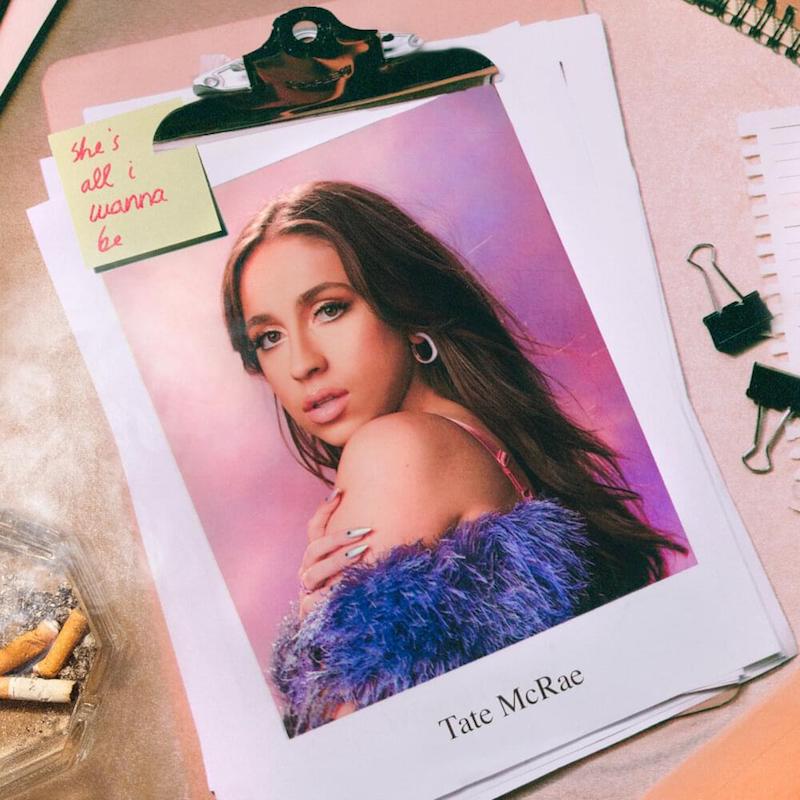 We recommend adding Tate McRae’s “she’s all i wanna be” single to your favorite contemporary-pop playlist. Also, let us know how you feel about it in the comment section below. Mel Blanc’s famous catchphrase, “That’s All Folks!” Thanks for reading another great article on Bong Mines Entertainment – the hot spot for new music. Furthermore, always remember that (P) Positive, (E) Energy, (A) Always, (C) Creates, (E) Elevation (P.E.A.C.E).