J. Cole is a popular hip-hop lyricist out of Fayetteville, North Carolina. Not too long ago, he released his long-anticipated, self-produced, fifth studio album, entitled, “KOD”.

Cole revealed via Twitter that “KOD” stands for Kids on Drugs, King Overdosed, and Kill Our Demons. The rest of the album he leaves to our interpretation. Well, let’s begin.

The album begins with caution. Jazz bellows underneath a female voice reciting uplifting words. Her message suggests listeners should make the right decisions (choose wisely) because the past (sand in an hourglass) can provide shelter for their demons.

Also, a way to a painless existence is provided. Those in pain must choose wisely, or make healthier decisions, to avoid being tormented by their past. 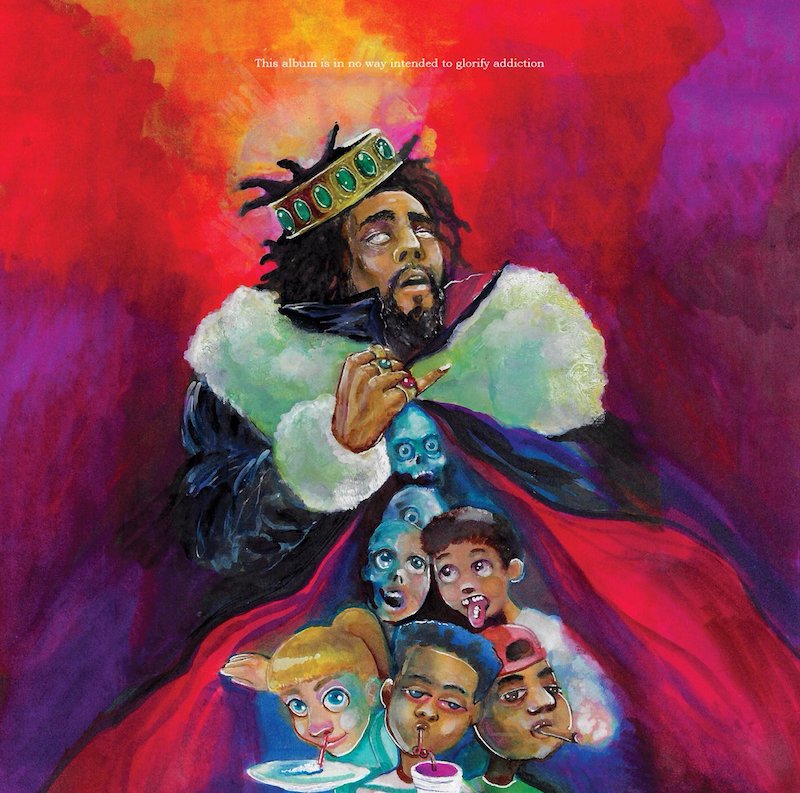 The title track showcases Cole’s Kids on Drugs braggadocios side. In verse one, he utilizes his carnal mind to reply to media/fans asking him a bunch of ‘how’ questions. But instead of being humble, Cole replies to his critics in an arrogant way.

“How ’bout you just get the f*ck off my d*ck? How ’bout you listen and never forget? Only gon’ say this one time, then I’ll dip. Ni^^as ain’t worthy to be on my sh*t.”

The second verse disconnects from the first and goes into a random storytelling mode with intersecting ideas that jump from one subject to another.

The outro is noteworthy. It forms a bridge between Intro and KOD songs. Also, it ends on a thought-provoking note.

If love is indeed the strongest drug like Cole stated, then why isn’t it being chased after like the drugs listed above? Why aren’t more people getting high off love? The question then becomes…is love even a drug?

That depends on who you ask. But what we all will agree on, love is an invisible element that contributes to people being addicted to drugs? It’s a fact, a strong love for something breeds addiction, dependency, et cetera.

Cole uses a 2018 rhyme pattern to address a woman he follows privately on social media. He’s addicted or loves to stalk the woman online, and it’s starting to mess with his health.

“I noticed the way you maneuver. Sexy, but never show too much. Ain’t heard from you in like two months. All of a sudden, you pop on my line. You could make time, stop on a dime. I think you mastered the art of sublime. Your type is harder to find.”

Cole always excels when he tells stories about him and a woman. Women are his go-to subject to rap about and he does a pretty good job on this song.

THE CUT OFF (FEAT. KILL EDWARD)

Cole isn’t too fond of doing features on his albums. But this time, he enlists his alter ego, kiLL edward, to help him say that Heaven is a mental mind state.

edward raps that he’s stuck in his fallen ways and that’s why he keeps falling down. That’s why he drinks alcohol and uses drugs to help him cope. But keep in mind that edward is actually Cole.

Cole raps about disloyal friends that owe him an apology and what he’s gonna do to them when they meet. But all the while, edward is in Cole’s mind telling him that drinking alcohol and using drugs will help numb his pain.

ATM is an energetically poppin’ single with replay value. It begins with the album’s theme—choose wisely.

Cole praises money like it’s biblical and even states that it solved every problem he had. But after counting up all the money, he concludes that you can’t take it with you when you die.

The Scott Lazer & Cole-directed video shows the King of Drugs chauffeuring a bunch of children riding on a drug float. The storyline is dope, reminiscent of a classic video from hip-hop’s golden era.

Also, Cole literally gives his arm and leg to purchase a vehicle. That transaction signifies what people are doing nowadays to accumulate material wealth. But keep in mind, chasing money will lead to your death or downfall. Message received.

Motiv8 is a good track that features a sample from Junior M.A.F.I.A.’s “Get Money” single.

Cole encourages listeners to get high and get money, even though he just said that chasing money is detrimental to their health.

Verse 2 features one of Cole’s best lyrics and flow.

“Woah, suddenly, I feel like takin’ a PJ. Fly to D.R. on a weekday, eatin’ ceviche. With like half of a mili’ inside of my briefcase. A couple of freaks play and they don’t speak Ingles. But the money is somethin’ that they could comprende.”

Cole’s continues his lyrical crusade and touches on his favorite subject.

He raps about being in a committed relationship but admits to being an addict that’s addicted to cheating. He tries to fight the temptation and remain faithful but acknowledges that he’s fake for thinking that way.

“My actions I know they confusin’. At home, I look happy as usual. On the road I’m a mack, I’m a chooser. I’m an addict, I’m maskin’ that Kevin’s Heart. They tell me, ‘What’s done in the dark will find a way to shine.’ I done did so much that when you see you might go blind.”

The song begins with a Richard Pryor comedy skit.

Cole speaks about being a millionaire and then he receives a phone call from Uncle Sam.

“Maybe ’cause the tax dollars that I make sure I send get spent hirin’ some teachers that don’t look like them. And the curriculum be tricking them, them dollars I spend got us learning about the heroes with the whitest of skin. One thing about the men that’s controlling the pen that write history, they always seem to white-out they sins. Maybe we’ll never see a black man in the White House again. I’ll write a check to the IRS, my pockets get slim.”

ONCE AN ADDICT – INTERLUDE

Cole shines brightly on this song, which is reminiscent of Nas’ “Project Windows” single.

He addresses his mother’s battle with alcoholism. The reason why she drank—because Cole’s step-father had a baby with another woman. So, to cope with the pain, Cole’s mother started abusing alcohol.

With no one to turn to, she used to call to talk to Cole. But he didn’t like talking to her while she was drunk.

He raps, “Hate how she slurin’ her words soundin’ so fuckin’ absurd.”

At the end of the song, Cole regrets being that way to his mother when she needed him the most.

Cole finds solace in his alter ego and cops another bag of weed to smoke. Somehow, he needs it to cope and gets aggravated when he doesn’t smoke.

He takes this time to address his friends who aren’t motivated to succeed. He tells them several things they can blame their lack of motivation on. And ends it by saying that the blame game is also an addiction that people use to not get better.

Also, he raps about depression and drug addiction.

“You running from yourself and you buying product again. I know you say it helps and no I’m not trying to offend. But I know depression and drug addiction don’t blend. Reality distorts and then you get lost in the wind.”

The song begins with a girl telling Cole about the time her cousin got shot. Cole is sad, listening to the girl with tears in his eyes.

He admits, “If you was my sister then I would kiss you. And tell you that I’m sorry for the pain you had to live through. I know I’m blessed because yo’ stress is realer than anything I done been through.”

Then Cole praises the Most High. He speaks about things he wanna do like killing the man that made his mother cry and seeing his granny on the other side.

The girl ends the song with a powerful message.

Cole’s flow is melodic and his lyrics cut deep. He foretells Pump’s future and predicts the rapper will be on Love & Hip-Hop in five years. Also, Cole wished him good luck in his career. 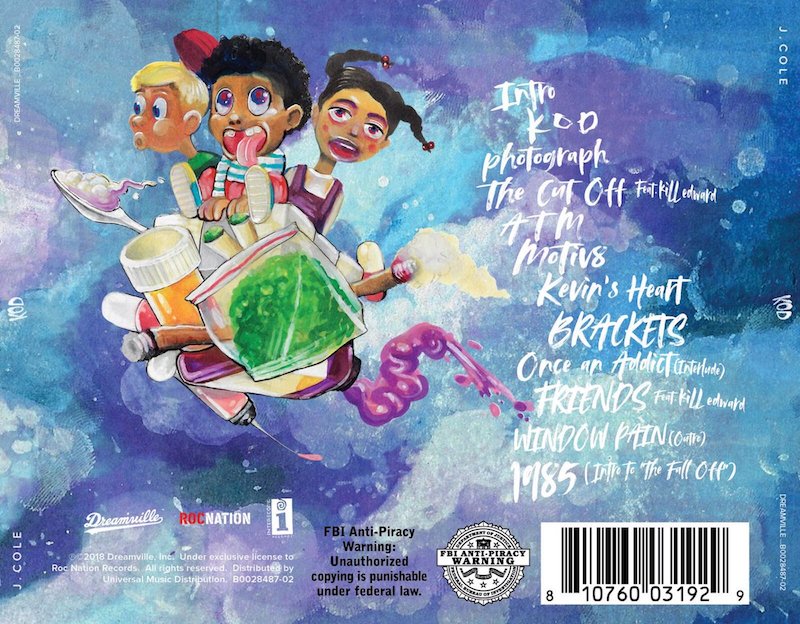 J. Cole gets a big thumbs up for producing a solid album with no features. Also, his evergreen message of choosing wisely has to be applauded, especially nowadays when living recklessly is being rewarded.

Listeners have different options to cope with their pain. Using drugs and drinking alcohol are just two ways of doing so. But if you choose wisely, and pick a healthier way to ease your pain, your life will change for the better.