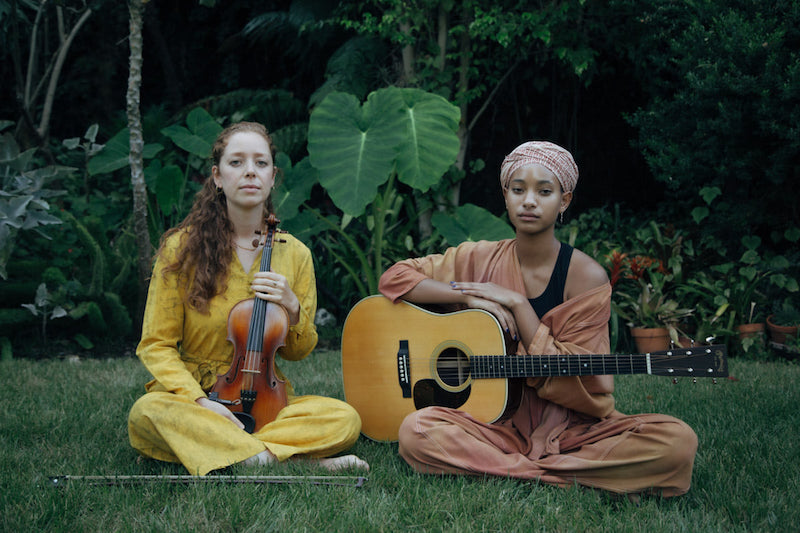 WILLOW is a double-platinum recording artist and Jahnavi Harrison is a British musician. Not too long ago, they released a remarkable six-track EP, entitled, “R I S E.” The project features timeless Sanskrit mantras and original lyrics inspired by sacred texts of the Bhakti tradition.

In the search for a deeper connection and inner calm, WILLOW and Jahnavi have combined their musical influences to create a spiritual, meditative, and uplifting collection of art. Layering soulful vocals with subtle instrumentation, the songs offer a space to listen to the deepest questions of the heart and embark upon the journey within. Together, WILLOW and Jahnavi have created a truly special body of music; rich, meditative, beautiful, and enriching.

“The more I grow the more I realize that the only things that truly matter in life are being in service to humanity in any way that I possibly can, and strengthening my relationship with The Divine. I have so much gratitude for the fact that I got to make my first devotional album with such a pure, talented, and peaceful human like Jahnavi. I hope that our offering will soothe the heart and nourish the souls of whoever listens.” – WILLOW stated

WILLOW transcends categorization. She first made history when 2010’s “Whip My Hair” went double-platinum, cementing her as “the youngest artist in history to achieve a double-platinum single.” Evolving from this frenetic template, 2015’s ARDIPTHECUS gave way to the artful alternative power of The 1st.

In July of 2019, WILLOW released her third album, entitled, WILLOW. Also, this past February, she announced her new band, The Anxiety, with MSFTS labelmate, Tyler Cole. The Anxiety is a collaborative project between the duo that showcases the anxiety that both Willow and Tyler endure on a day to day basis and how they cope with it. Their self-titled album released on March 13th, 2020.

So far, WILLOW has graced the covers of Teen Vogue, W Magazine, and I-D Magazine. In addition to Vanity Fair’s ‘Hollywood’s Next Wave’ issue. Also, not too long ago, she received the 2016 Fashion Award for New Fashion Icons. And she has been sought out to front campaigns for Maison Margiela, Chanel, and Stance Socks.

WILLOW holds the distinction of being “the youngest transatlantic Top 20 artist” and garnered Outstanding New Artist at the 2011 NCAAP Image Awards. Also, she fights human trafficking alongside her mother’s organization Don’t Sell Bodies. Furthermore, she cohosts Red Table Talk on Facebook Watch. Every day, she defies boundaries and borders and defines herself as an individual through and through.

“Willow and I met through mutual friends at an event I was leading. We connected through the beautiful music of kirtan. A musical form of meditation that uses call and response singing of mantras to open the heart and connect with The Divine. Feeling how deeply it affected us personally, we felt inspired to spread this music further. Also, I knew that something unique and special could come from bringing together our different sounds and musical influences. I love what we’ve created and especially feel really hopeful that listening to it soothes the heart and offers a sacred space in these difficult times.” – Jahnavi Harrison stated

Jahnavi Harrison was raised in a family of Bhakti-yoga practitioners at Bhaktivedanta Manor, one of England’s most important spiritual landmarks. As a child, she was fascinated with song and story. She has nurtured that interest through her life-long exploration of music, dance, visual art, and the written word. Also, Harrison is a musician who aims to channel her creative expression as a path to self-realization and service.

Jahnavi Harrison released her debut album, “Like a River to the Sea,” in July 2015. Also, she features on the Grammy-nominated Bhakti Without Borders charity album (2016). Jahnavi presents regularly for BBC Radio 2’s ‘Pause for Thought’ and ‘Something Understood’ on BBC Radio 4.

For over 12 years, she has traveled the world. Offering her voice and violin playing in the performance of sacred music and call-and-response mantra chant (kirtan). Her sound encompasses rich influences of East and West and aims to offer an experience that truly nourishes the spirit. Based in both London and New York, she offers regular concerts, sound baths, and workshops.

We recommend adding songs from WILLOW’s & Jahnavi Harrison’s “R I S E” EP to your playlist. Also, let us know how you feel in the comment section below. Peace.