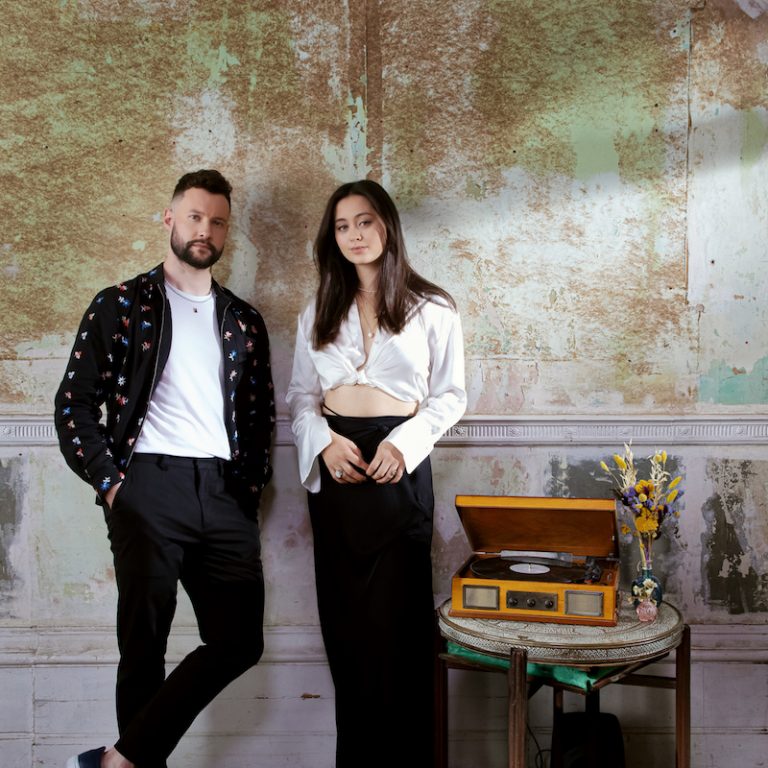 Jasmine Thompson is a talented singer-songwriter based in London, England. Calum Scott is a multi-platinum-selling, chart-topping UK singer-songwriter. Not too long ago, they released a lovely pop duet, entitled, “love is just a word.” The accompanying live acoustic video, directed by Jackson Ducasse (Dua Lipa, New Order), reflects their love of singing live and underscores the song’s raw emotion.

“I went to Wales to work with the producer, Jon Maguire, and I remember having the opening lyric in my head. We spent two days working together and managed to make something we were both super proud of. A few months after the session, totally out of the blue, Jon messaged me with an updated version including Calum. It was so magical hearing his voice on it, and I felt so honored that he wanted to be a part of the song – it immediately felt like the missing link.

We had such a laugh, I couldn’t keep a straight face while recording. Jon had to stick us in separate rooms – but that voice… magical. The song was inspired by slow dancing around my kitchen during the lockdown. And it felt like I was hearing these love songs from my childhood with fresh ears and I really wanted to capture how they made me feel.” – Jasmine Thompson explained

‘love is just a word’ contains ear-pleasing vocals, tuneful melodies, and a relatable narrative that tells a story of love that’s at its most meaningful when you and your significant other are together. The heartfelt ballad possesses piano-driven instrumentation flavored with a warm contemporary pop vibration. Furthermore, “love is just a word” serves as a tasty appetizer to what listeners can expect to hear from Jasmine Thompson and Calum Scott in the near future as they continue to release new music.

‘love is just a word’ was co-written by Thompson, Scott, and Jon Maguire (James Bay, Liam Payne, Rita Ora). The song marks the latest in a series of singles from Thompson, including the recently released, “after goodbye.”

“‘after goodbye’ is about seeing someone you love with someone new and realizing that you haven’t moved on. You knew it would hurt to leave behind a relationship, but you never once thought about what happens after that door has closed.” – Jasmine Thompson explained

‘after goodbye’ contains a post-relationship-based narrative, ear-pleasing vocals, and tuneful melodies gingered with a mild dose of unhappiness. The heartbreaking tune possesses guitar-laden instrumentation flavored with a warm indie-pop vibration. Furthermore, “after goodbye” marks the latest in a series of singles from Jasmine Thompson, including the joyful, “happy for you.”

At the age of just 13, Jasmine Thompson’s booming YouTube presence and captivating vocals helped lead to a major label deal with Atlantic Records. Now, at the age of 20, she has enjoyed a musical growth that’s taken her from viral covers to her own WONDERLAND and COLOUR EPs. Since then, Thompson has become even more beloved. She has earned more than three billion global streams and over five million monthly Spotify listeners worldwide. Also, her blockbuster YouTube channel has grown by leaps and bounds, accruing over 679 million views and more than 3.62 million subscribers thus far.

Along with her acclaimed solo work, Thompson has made chart-topping appearances on a pair of global blockbuster hit singles. Her collaboration with German DJ/producer, Robin Schulz, on “Sun Goes Down (Feat. Jasmine Thompson),” has earned over one billion worldwide streams. Also, she had a slew of international gold and platinum certifications and Top 5 and Top 10 chart runs in Europe, Australia, and South America.

German DJ Felix Jaehn’s billion-streaming “Ain’t Nobody (Loves Me Better)” remix was an even greater smash. The song ascended to the top 10 on the iTunes Store’s “Top Dance Songs” chart while earning gold and platinum certifications in a range of countries. More recently, 2020 saw Thompson teaming with GRAMMY® award-winning artist/DJ/producer Zedd for the hit single, “Funny,” currently boasting close to 200 million global streams to date.

“My producer and I were about to sit down and finish a song that we had written for my album when he mentioned a demo he wanted to play me that he had written with Jasmine. As a big fan of her work already, we sat and listened. And as soon as the demo ended, I told him I wanted to help them finish it and be part of it somehow. I love the simplicity of the lyrics. But using iconic love songs to imagine how they would be without the key ingredient of love was what really pulled me in. I’m a huge fan of Jasmine’s voice, her songwriting, and her energy. To do a duet with her has been truly amazing.” – Calum Scott explained

With the arrival of his 2018 debut album, “Only Human,” Calum Scott landed at No. 1 on the iTunes album chart in over 20 countries around the world. Also, he sold more than 3.6 million in adjusted album sales and amassed over 7.5 billion total global streams and counting. Now certified platinum and gold in 21 countries, “Only Human” includes his platinum-selling smash, “You Are The Reason.”

Calum Scott – “You Are The Reason” music video

‘You Are The Reason’ cracked the top 25 on Spotify’s US Viral 50 and hit the top 10 on iTunes single charts in 38 countries. Also, the album features Calum’s stripped-back, the platinum-certified cover of Robyn’s “Dancing On My Own” single, which earned him a Brit Award nomination in the category of Best British Single.

Calum Scott released his first new music since “Only Human” in June, with the track, “Biblical,” which marked an exciting evolution of his artistry, bringing even more raw emotion to his soulful and timeless sound. The piano-laced ballad is the first song released from his highly anticipated sophomore album, due out in early 2022.

Calum’s new single, “Rise,” offers exactly the kind of reassurance needed in difficult times. As the song unfolds in a joyful and majestic sound, Calum delivers a spirited vocal performance that perfectly captures the uplifting message at the heart of the song.

Not too long ago, Calum Scott featured on Lost Frequencies’ new track, Where Are You Now. So far, the song has already amassed over 80 million global streams.

Lost Frequencies ft. Calum Scott – “Where Are You Now”

Over the last few years, Calum’s songs have appeared on countless TV shows including “American Idol,” “The Voice,” “So You Think You Can Dance,” “Grey’s Anatomy,” and many more.  Also, Calum has performed on such shows as “Late Night with Seth Meyers,” “Ellen,” “Good Morning America,” “Live with Kelly and Ryan,” “Dancing With The Stars,” and “The TODAY Show” among others.

“love is just a word” single

We recommend adding Jasmine Thompson’s and Calum Scott’s “love is just a word” single to your favorite contemporary pop playlist. Also, let us know how you feel in the comment section below. Mel Blanc’s famous catchphrase, “That’s All Folks!” Thanks for reading another great article on Bong Mines Entertainment – the hot spot for new music. Furthermore, always remember that (P) Positive, (E) Energy, (A) Always, (C) Creates, (E) Elevation (P.E.A.C.E).