Banx & Ranx is a Latin GRAMMY® Award-nominated Montréal duo consisting of Zacharie “Soké” Raymond and Yannick “KNY Factory” Rastogi. JP Cooper is a multi-Platinum singer-songwriter from Manchester, England. Not too long ago, they released a lovely lyric video for their sensational pop single, entitled, “Fire,” via Universal Music Canada/Island UK and Polydor France. The fiery tune radiates the flirtatious energy that buzzes through parties on hot summer nights.

“I started writing ‘Fire’ a couple of years ago on a summer day in my back garden with a beer and a ukulele. I wasn’t even trying to write but I stumbled across a little hook that made me smile. I made a little video of it, so I didn’t forget it, and ended up sending it to Banx & Ranx. I didn’t know where to take it, but I thought their flavor would sound amazing on the track. About a year later, I flew to Montreal to hang with the guys, and we finished the record together. This song just makes me smile. The whole experience from sitting in my yard to dancing around the studio with the guys was a joy. I’m excited to share that joy with the rest of the world. I hope it warms your spirits!” – JP Cooper explained

Part of that original demo can be heard as the track opens with the sound of strumming acoustic guitar and JP Cooper’s infectious chorus which evolves from a distant intro into the glossy groove of the Caribbean-rooted Banx & Ranx production. Cooper’s sensual lyrics and smooth vocals are elevated by the lush soundscapes and irresistible rhythm of the Banx & Ranx signature ECM (Electronic Caribbean Music) sound.

“We absolutely loooove JP Cooper. We invited him to our songwriting camp in Montréal and ended up creating ‘Fire’ from a demo he had on his phone. It’s pure party and chilling vibes.” – Banx & Ranx explained

Evidently, one of the most successful duos in the industry, Banx & Ranx are set to continue their hot streak. Known for their positive, creative energy in the studio, “Fire” is the latest in numerous successful collaborations Banx & Ranx have orchestrated. In the past few months alone, they have infused their signature ECM sound into Shenseea’s debut album, “ALPHA,” which debuted at No. 2 on the Billboard Reggae Chart. Also,  on Sean Paul’s album, “Scorcha,” which landed him his 10th Billboard-charting album.

Banx & Ranx have a string of hit singles with the breakout artists signed to their Montréal-based label, 31 East. Their Platinum Certified single, “CTRL + ALT + DEL,” with the dance-pop artist, Rêve, hit #8 on the Canadian Top 40 radio chart. To date, the song has accumulated over 35 million streams to date.

‘Headphones’ featuring Rêve reached #9 on the Top 40 chart. To date, the song has accumulated over 5.7 million streams, which landed Banx & Ranx two of Canada’s most sought-after radio accolades: the iHeartRadio Future Star and the Rogers One to Watch. This success was followed by a remix version featuring a guest verse from Tommy Genesis.

‘Flowers Need Rain,’ with singer-songwriter, Preston Pablo, was the #1 most added song on Canadian radio. So far, the song has hit #1 on the Canada Discovery Shazam charts and it has risen to #20 on the Top 40 Canadian radio chart. Also, “Flowers Need Rain” has been streamed over one million times. Furthermore, the song landed the titles of Stingray’s Trending Track and Rogers One To Watch.

Channeling the strength of their creative union, Banx & Ranx have surged to the forefront of popular music both behind-the-scenes as producers and in the spotlight as artists. To date, they have tallied over two billion streams worldwide and over one billion YouTube views. They attribute their success to their collaborative style in the studio and their talent for infusing their signature ECM (Electronic Caribbean Music) sound.

Banx & Ranx have partnered with Universal Music Canada for the next chapter of their careers with the joint focus of signing and elevating the next generation of Canadian artists bound for international acclaim. With several collaborations releasing this year, Banx & Ranx will only further cement their role as two of the most sought-after creative minds in the industry. 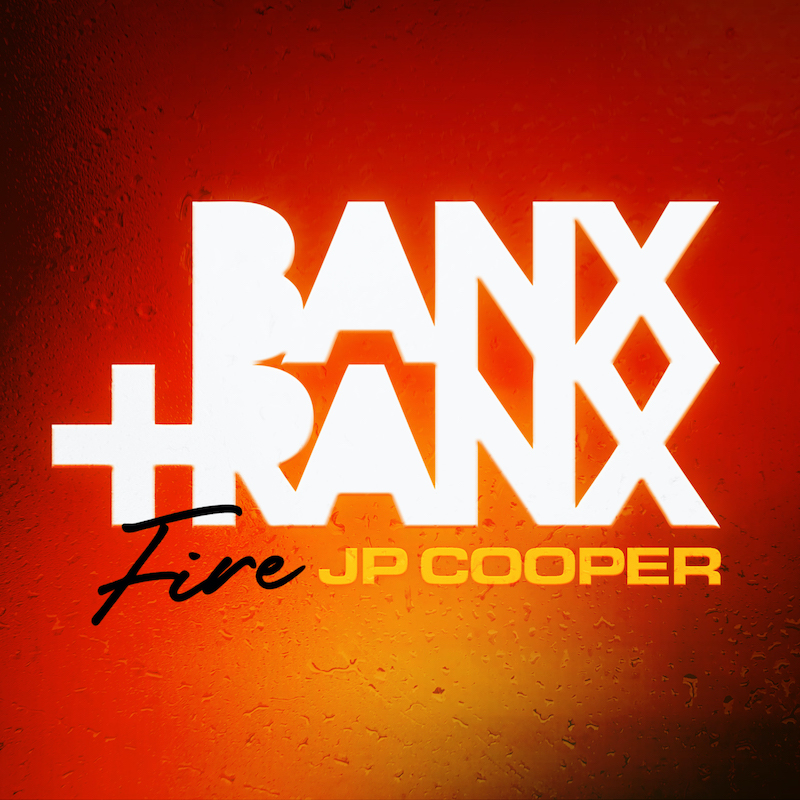 We recommend adding Banx & Ranx’s and JP Cooper’s “Fire” single to your favorite tropical pop playlist. Also, let us know how you feel in the comment section below. Mel Blanc’s famous catchphrase, That’s All Folks! Thanks for reading another great article on Bong Mines Entertainment – the hot spot for new music. Always remember that (P) Positive, (E) Energy, (A) Always, (C) Creates, (E) Elevation (P.E.A.C.E). Contact us on social media via Twitter, YouTube, Instagram, or Facebook, and let us know what’s going on. “Disclaimer: This post contains Apple TV and Apple Music affiliate links. We may earn an affiliate commission when you buy through links on our site.