Rebecca Black releases a music video for her heartfelt new single, entitled, “Look At You”

“The music video for ‘Look At You’ picks off literally right where we left off with the video for ‘Crumbs.’ A pretty poignant theme of my upcoming album is my perception of self and how performance holds multiple pieces of my life. So, Luke Orlando (director) and I wanted to try to open up a new layer of the world we set for ‘Crumbs’ into a place you might not expect it to. The music video set literally comes to life on its own, and becomes a performance within itself about the closeness we hold with ourselves and those around us.” – Rebecca Black explained

‘Look At You’ is the second offering from Rebecca Black’s upcoming debut album, entitled, “Let Her Burn,” slated for release in early 2023. The song follows the project’s introduction, a hypnotic, electro-pop track, “Crumbs,” which stole the attention of fans and tastemakers alike. Also, the song is fresh off the heels of Black’s headline tour in North America, which sold-out rooms across major markets. Not too long ago, she announced her Let Her Burn tour in the UK/Ireland, which kicks off on February 4th in Dublin and tours Glasgow, Manchester, Birmingham, London, and Bristol. 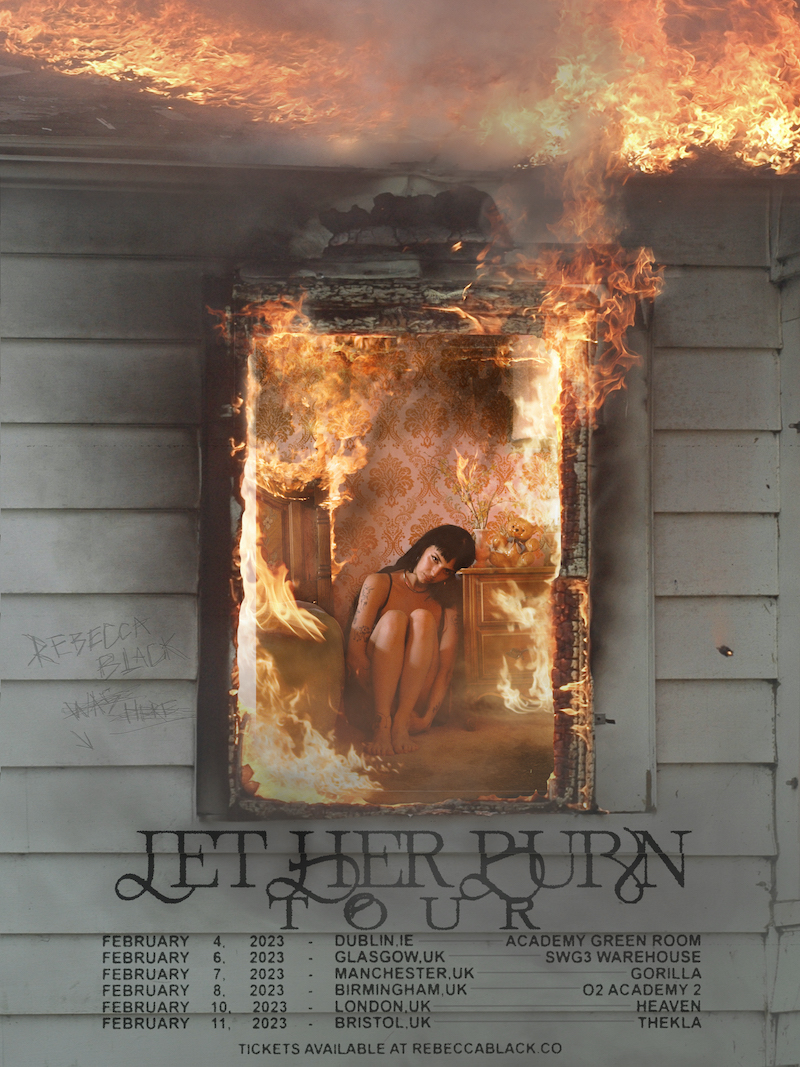 “I wrote this song about a best friend of mine. As my closest friends and I have now begun to really grow into ourselves, it can feel heart-wrenching to witness people you love fall for a moment or lose sight of the goodness they have within themselves when they’re struggling. As a friend, we just want to pick them up and show them who we really know them to be – to try to cheer so hard on the sidelines over how incredible they are, and how much they mean to us. But at the end of the day of course it’s only them who can discover their own light on their own.” – Rebecca Black explained

In 2021, the 10-year anniversary of RIAA Gold single, “Friday,” saw the release of the internet-breaking “Friday (Remix)” with friends Dorian Electra, Big Freedia, and 3OH!3, and Rebecca Black was officially reborn as an underground pop icon. In 2022, she released a series of collabs (“Read My Mind,” “Yoga,” “New Moon”) and her first Spanish language collab, “Cafe Racer” with DAGR + LVL1. Also, Black had pop-culture appearances in music videos for Blu De Tiger and Amy Allen, and milestone events including a packed-to-the-brim Coachella tent for Rebecca Black and Friends at DoLAb.

“Look At You” single

We recommend adding Rebecca Black’s “Look At You” single to your favorite electro-pop playlist. Also, let us know how you feel in the comment section below. Mel Blanc’s famous catchphrase, That’s All Folks! Thanks for reading another great article on Bong Mines Entertainment – the hot spot for new music and entertainment news. Always remember that (P) Positive, (E) Energy, (A) Always, (C) Creates, (E) Elevation (P.E.A.C.E). Contact us on social media via Twitter, YouTube, Instagram, or Facebook, and let us know what’s going on. Disclaimer: This post contains affiliate links. If you make a purchase after clicking a link, we’ll collect a share of sales or other compensation.