GAYLE is a young chart-topping singer-songwriter and musician based in Nashville, TN. Not too long ago, she released a brand-new six-track sophomore EP, entitled, “a study of the human experience volume two,” along with an entertaining lyric video for her “snow angels” single via Atlantic/Arthouse Records.

“It can be so easy to spiral out about the state of the world and how stressful and terrifying everything is. But you still need those moments of just having fun with your friends. I wrote a whole song about that concept and then I talked to my brother, and he told me something like, ‘If I’m gonna be partying, I just wanna make snow angels in the grass.’ It fit so perfectly with the song, I had to go back and rewrite it.” – GAYLE explained

A blissfully upbeat song, “snow angels” came to life with a bit of serendipitous help from GAYLE’s big brother. The track contains a carefree narrative and ear-pleasing vocals that will resonate well with young music lovers who like to have fun.

“I got blackbear to jump on the track and turned it into a duet about loving someone so intensely but also being intensely annoyed by them.” – GAYLE stated

On “fmk,” blackbear joins GAYLE for a playfully chaotic duet speaking to the ups and downs of obsession. In the first weekend following its release, “fmk (with blackbear)” instantly earned over one million streams. The song arrived alongside a delightfully homicidal animated video, directed by award-winning Belgian director, Chris Ullens (Rex Orange County, Poppy).

GAYLE – “a study of the human experience volume two” 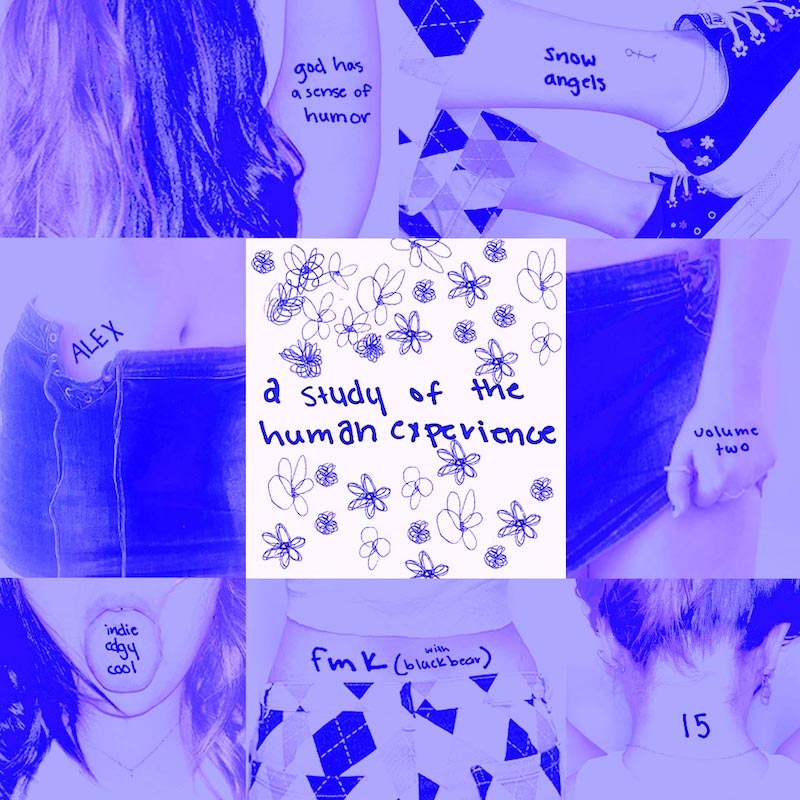 “With this new EP, I wanted to go a little deeper and tell more of my story, to give more context for why I am the way I am. I want people to know that I’ve definitely had those moments where the world feels so confusing and unpredictable and that no one is alone in what they’re feeling or going through.

Every choice I have ever made has gotten me to this very moment. Some I made subconsciously, and some I’ve made deliberately. Either way, every moment of the human experience I chose to live in made me who I am. I’m not always proud of who I am or things I’ve done, but I am who I am, and I can’t change that. ‘a study of the human experience volume two’ talks about the moments that happened in my life that led to where I am. I don’t always do the healthiest, the smartest, the most mature, the most reasonable or responsible things – I just do what I want at the moment and learn from my mistakes.” – GAYLE explained

Made with producers like Noah Conrad, Ryan Linvill, and Pete Nappi, “a study of the human experience volume two” contains deeply personal songs such as “god has a sense of humor”—a heavy-hearted yet quietly epic piano ballad with an existentialist bent.

“god has a sense of humor” lyric video

“I wasn’t really raised with religion, and at some point, I realized that other people have this belief system that helps them to understand why bad things happen. That song is about wanting to have hope and being torn between a pessimistic and optimistic perspective on the world. Because at the end of the day, I want to believe that we’re all just doing our best.” – GAYLE explained

A packed year for GAYLE is highlighted most recently by her Nashville Songwriter Awards nod in their “10 Songs I Wish I’d Written” list. 2022 has also seen GAYLE traveling on her own sold-out headline run, shows alongside My Chemical Romance, and tours supporting Tate McRae and AJR. GAYLE is currently lighting up an array of festival stages around the world, with recent performances at Lollapalooza, the UK’s Reading and Leeds, and Firefly Music Festival.

This summer marked the one-year anniversary of GAYLE’s 2x RIAA platinum-certified, two billion-streaming, worldwide #1 breakthrough hit, “abcdefu.” The song proved a landmark debut for GAYLE, holding #1 on the Billboard Global 200 for nine consecutive weeks. Also, “abcdefu” peaked at #3 on the Billboard “Hot 100” after spending three consecutive weeks atop the Top 40 radio charts. Furthermore, the song is featured on GAYLE’s debut EP, entitled, “a study of the human experience volume one.”

“That title came from making fun of the pressure I put on myself sometimes to try to be cool. I wanted to poke fun at the idea of there being a hierarchy of coolness, and to put on the persona of someone who takes that too seriously.” – GAYLE explained

Expanding on the wildly carefree spirit of “abcdefu,” a study of the human experience volume two embodies a more lighthearted mood on “indieedgycool,” a brilliantly sardonic and bass-heavy track.

“I was writing with some friends and telling them the story of when I realized I needed to break up with my ex, and one of them said, ‘Break Up With Alex’ would be a great song.’ I told them that the last thing I’d ever want to do is to put my ex’s name in a song, so then they said to me: ‘Cool, we’ll write it without you and you’ll wish you’d written it with us.’ And so here we are.” – GAYLE explained

For GAYLE, the most fun moment in the making of her new EP took place in the writing of “Alex,” a scathingly honest breakup song.

“It’s about making the best thing you possibly can, and seeing what comes from that. Any song I make or hear always has a color to it. The first EP was orange but this one is blue, which is the complementary color for orange. There’s a lot of green and gray and white in these new songs as well, and it felt really exciting to work with a whole different color palette.

I truly believe that music is a unifying force, and I want to give people the space to be completely themselves and to see that there are other people in the world who feel the same way they do. My songs tend to come from being uncomfortable with what I’m feeling and not wanting to focus on it, but then getting to the point where I just need to get it all out. If my music can help other people to make better sense of themselves, to come to terms with who they are and what they’re feeling, then that means the world to me.” – GAYLE clarified

In all of the sessions for “a study of the human experience volume two,” GAYLE embraced unbridled freedom in the creative process. Because she has chromesthesia (a phenomenon in which sounds manifest as colors), GAYLE also finds songwriting to be a highly sensory experience.

We recommend adding songs from GAYLE’s “a study of the human experience volume two” EP to your favorite alternative pop playlist. Also, let us know how you feel in the comment section below. Mel Blanc’s famous catchphrase, That’s All Folks! Thanks for reading another great article on Bong Mines Entertainment – the hot spot for new music. Always remember that (P) Positive, (E) Energy, (A) Always, (C) Creates, (E) Elevation (P.E.A.C.E). Contact us on social media via Twitter, YouTube, Instagram, or Facebook, and let us know what’s going on. Disclaimer: This post, contains affiliate links, and we may be compensated if you make a purchase through links on our website.