Dizaster versus Hollow Da Don took place at KOTD’s #MASS3 event as a surprised battle. And the audiences were excited to see the two battle-rap legends. This is just a preview of their upcoming 3-round battle.

“I said a silencer I throw on a vert When I’m going to squirt, it sound, “Whoooo..” They don’t know if I’m going berserk or throwing a Nerf. Ni^^a play ‘Pac, all they’ll find is the hair and bone. Once you became Public Enemy, I was welcome to tear a dome. The way you’ve been acting, I could tell what you clearly on. My Basic Instinct tell me you and Lush sharing stones.” – Quotable lyrics from Hollow Da Don 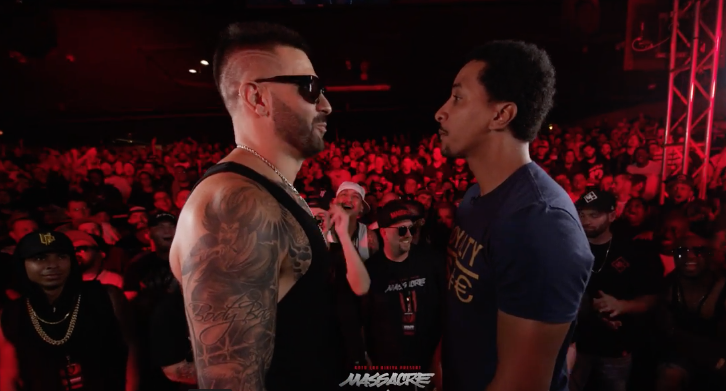 “But f*ck the Tsarnaev brothers, how long we seen Da Don ducking? Trying to prolong but you knew you had this all coming. Which is why I brought up the marathons because I been on the scene from the start gunning. And you like Usain Bolt because it took till 2017 for you to finally decide to stop running. He said, ‘It’s not you it’s the bag.’ I said, ‘It’s not you it’s the fags.’ I said, ‘It’s his mom dukes and his dad?’ He said, ‘Dog, poodle, and cat.’ Shut the f*ck up Hollow Don with your f*cking Zorro mustache, you got on. You look like a Puerto Rican reggaeton DJ, your name should be Hollow Da Juan.” – Quotable lyrics for Dizaster

Let us know who you think won the battle. Dizaster or Hollow Da Don?