Dizaster is a legendary battle rapper from Los Angeles, California. Danny “The Bar God” Myers is a battle-tested emcee from the same rugged environment. Not too long ago, the two combatants battled in a grueling battle at KOTD’s #TownBidness event.

Danny Myers tries to show Dizaster the difference between being a G.O.A.T. (greatest of all time) and a goat herder.

But Dizaster has his mind set on putting hands and feet on Danny as if he was Mr. Potato Head.

Danny Myers Round One

“You been worldwide wit’ it, you been cookin’ over shores. But I held it down on the west, you know what it took to open doors? When I looked over my shoulder in New York, I didn’t see you ‘cause you would’ve been too busy lookin’ over yours. 100 shots in front of yo’ girl, show her what that MAC might do. It starts spittin’, then a bunch will fill her (filler) now she (w)rap like you. I ain’t even watch ‘Bodied’, we spray cats with them hollows. Maybe, I’ll watch Dizaster (disaster) movie ‘The Day After Tomorrow’.” – Danny Myers

Danny Myers attacks Dizaster for not putting him in the battle-rap movie, entitled, Bodied.

But Myers isn’t tripping that he wasn’t cast for the film because he plans on leaving Dizaster bodied, with his body parts scattered all over the land like Fukushima, a nuclear disaster.

Myers’ clever wordplay is witty and out of this world because he utilizes his pen effectively.

“Out in NYC you butt kissin’ and you chill wit’ the ops. Contracted measles, now you back here and want me to give you a shot. I’m puttin’ on a clinic, so I’m either tossin’ you off of the ship or I’m leavin’ you on it long enough for you to watch me sink it. So either way, you gonna visit the doc(k). Yeah, you get paid $500 deposits. That’s minimal guap. He gets paid for those bars of his in compliments, the battle rap Carrot Top. You basically makin’ a livin’ off your props. You a washed up 40-year-old, still out here beggin’ for .50 cent (50 Cent) like Vivica Fox.” – Dizaster

Dizaster clowns Danny Myers as a delusional kid from a parallel universe who assumes that he has the best pen in battle rap.

According to Diz, Myers is a chump who softens up when sh*t hits the fan.

During the Math Hoffa altercation, when Diz snuffed Math, Diz claims Myers lost his footwear. Shortly afterward, he got trampled on and didn’t throw his hands ‘cause he has no hands like a digital clock. 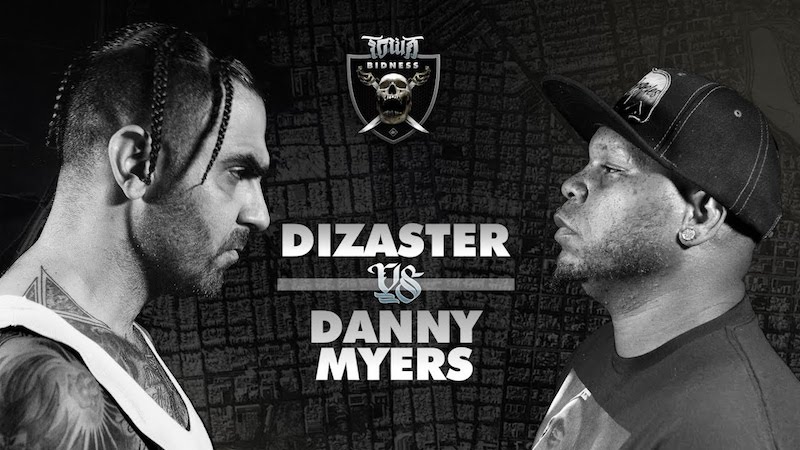 “Yeah, he likes haymakers and punchlines but forgot to brand his image. Yeah, you got the battlin’ spirit, but what good is a haymaker punchline if it doesn’t come with a f*cking personality with it. And that’s the real reality check for me. ‘Cause your whole style built like the most random accessory. You come with a battery in your back and personality sold separately.” – Dizaster

The rest of the battle is lyrical entertaining, and in our humble opinion, we have Dizaster defeating Danny Myers 3-0, with a debatable second round, so maybe 2-1.

Even though Myers was fire from beginning to end, Dizaster edged every round. Diz talked to Danny Myers’ soul in the third round and gave The Bar God a brief science lesson using Myers’ own slogan.

“I believe the Parallel Universe is a lower vibrational field you spent most of your career confined to. I believe in a multiverse, billions of different realities we might choose. And the one we’re living in right now is the only one we survive through. Now in this universe, I just schooled you like my f*cking son.” – Dizaster

Let us know who you feel won the battle in the comment section below. Dizaster or Danny Myers?