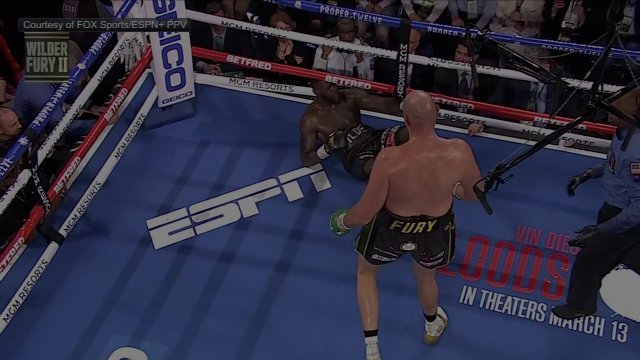 Lineal champion Tyson “The Gypsy King” Fury promised to take the fight from the judges’ hands by knocking out champion Deontay “Bronze Bomber” Wilder in the second round of their highly anticipated rematch. Well, on Saturday night (02/23/2020) at the MGM Grand Garden Arena in Las Vegas, Fury (who Wilder labeled “pillow-fist”) got his chance to do what he claimed he would do to the self-proclaimed “baddest man on the planet”.

“The king has returned. I just want to say a big shout out to Deontay Wilder. He came here tonight, he manned up and he showed the heart of a champion. He is a warrior, he will be back and he will be a champion again.” – stated Tyson Fury (30-0-1, 23 KOs) before serenading the crowd with his own rendition of “American Pie” by Don Maclean

From start to finish, Fury (all 273 pounds of him) outclassed, out-boxed, and out-muscled Wilder from pillar to post. In the end, Fury looked strong like a bull and Wilder looked beat-up, drained, and bloodied (bleeding badly from his ear and mouth). Also, Wilder didn’t have a clue on how to solve Tyson’s and (trainer) Sugar Hill Steward’s game plan.

In the third round, Fury knocked Wilder down in the corner with a looping right hand that landed on the rear part of Wilder’s head. Also, in the fifth round, he floored Wilder again with a beautiful left rib cage body blow. Furthermore, Fury could’ve gotten another knockdown when the ropes saved Wilder from falling. But the (referee) Kenny Bayless failed to acknowledge that and even took a point from Fury for landing an illegal blow during an official break in the action. In the seventh round, Tyson closed the show by pummeling Wilder on the ropes. Shortly afterward, Wilder’s corner threw in the towel and Bayless stopped the fight.

“This is what big-time boxing is all about. The best must fight the best. Even the greatest have lost and came back. I have no excuses tonight and we will come back even stronger next time.” – Deontay Wilder

Tyson Fury: “Everyone Said I Couldn’t Knock out Wilder, I Proved Everyone Wrong!”

“Things like this happens, the best man won tonight. But my trainer, my coach, my side, threw in the towel, and you know I’m ready to go out on my shield, man. You know what I’m saying. I had a lot of things going on coming into this fight. But it is what it is. I was already, my legs were already weak coming in due to other little things. But you know I make no excuses tonight. I just wish that my corner would have let me go out on my shield, I’m a warrior and that’s what I do you know.” – Deontay Wilder (42-1-1, 41 KOs) questions his corner’s decision to stop the fight

Tyson Fury’s win over Wilder serves as one of the best boxing performances of all time. Also, the victory was satisfying to those who thought Tyson won the first fight. Furthermore, the win is up there with Tyson’s masterclass victory over former three-belt champion, Wladimir Klitschko.

Tyson walked-in to Patsy Cline’s “Crazy” single and Wilder walked-in to D Smoke’s “Black Habits Ι” single featuring Jackie Gouché. We recommend adding both tunes to your personal playlist. Also, let us know how you about the fight in the comment section below.