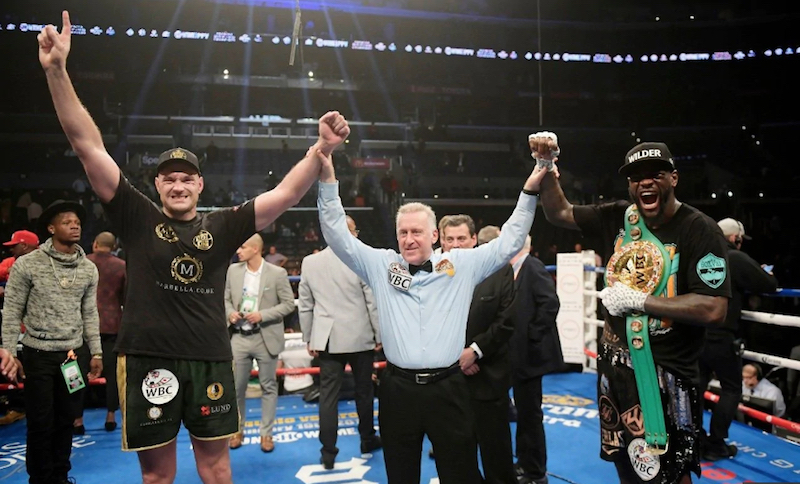 Deontay “The Bronze Bomber” Wilder is the WBC Heavyweight World Champion from Tuscaloosa, Alabama. Tyson Fury is the lineal heavyweight champion from Manchester, England. Not too long ago, the two giants fought to a split decision draw.

Going into the fight, fans and critics alike were wondering if Tyson Fury was physically and emotionally ready to combat someone like Deontay Wilder, considered the most dangerous puncher in the heavyweight division. But others wonder if Wilder doesn’t knock out Fury, could he win a decision against the slippery boxer known as the “Gypsy King”.

Well, those two questions were answered in enormous fashion on Saturday night at the Staple Center in Los Angeles, California. There, Wilder and Fury fought one of the greatest boxing heavyweight prizefights in the history of professional boxing.

Tyson Fury won the majority of the rounds. He outboxed Wilder and stayed away from Wilder’s powerful right hand, which has knocked out 39 out of his 41 opponents. Also, Fury’s herky-jerky movements made Wilder look sloppy at times, and confused the champion. This resulted in Wilder missing an exceptional amount of his power punches.

Deontay Wilder proved why he’s one of the most feared punchers in the heavyweight division. He knocked Fury down with a counter punch in the 9th round. Also, in the 12th round, he landed two shots that send Fury crashing to the canvas again. The back of his head bouncing against the mat.

It looked like it was all over for the Gypsy King as referee Jack Reiss began counting to ten. But, “Hold up wait a minute, y’all thought I was finished?” Meek Mill’s voice. To the surprise of everyone at the Staple Center, and the millions watching live on PPV, Fury rose to his feet like the Undertaker in a WWE match. It was a surreal moment in boxing history, which showed Fury’s resilience.

In conclusion, Judge Robert Tapper scored the fight 114-112 for Fury, while Alejandro Rochin favored Wilder 115-111. But Judge Phil Edwards, the only British judge, scored the fight 113-113 draw. The majority of the audience didn’t agree with the split-decision draw announcement because they felt Fury was robbed of a much-deserved victory. Others felt the draw was a just decision. Outside the arena, online to be exact, the majority of boxing and casual fans had Fury winning by points. Which brings us to this question—will there be a rematch between Wilder and Fury in the near future?

Let us know who you think won the fight on the poll below and also in our comment section.

Could not load the poll.