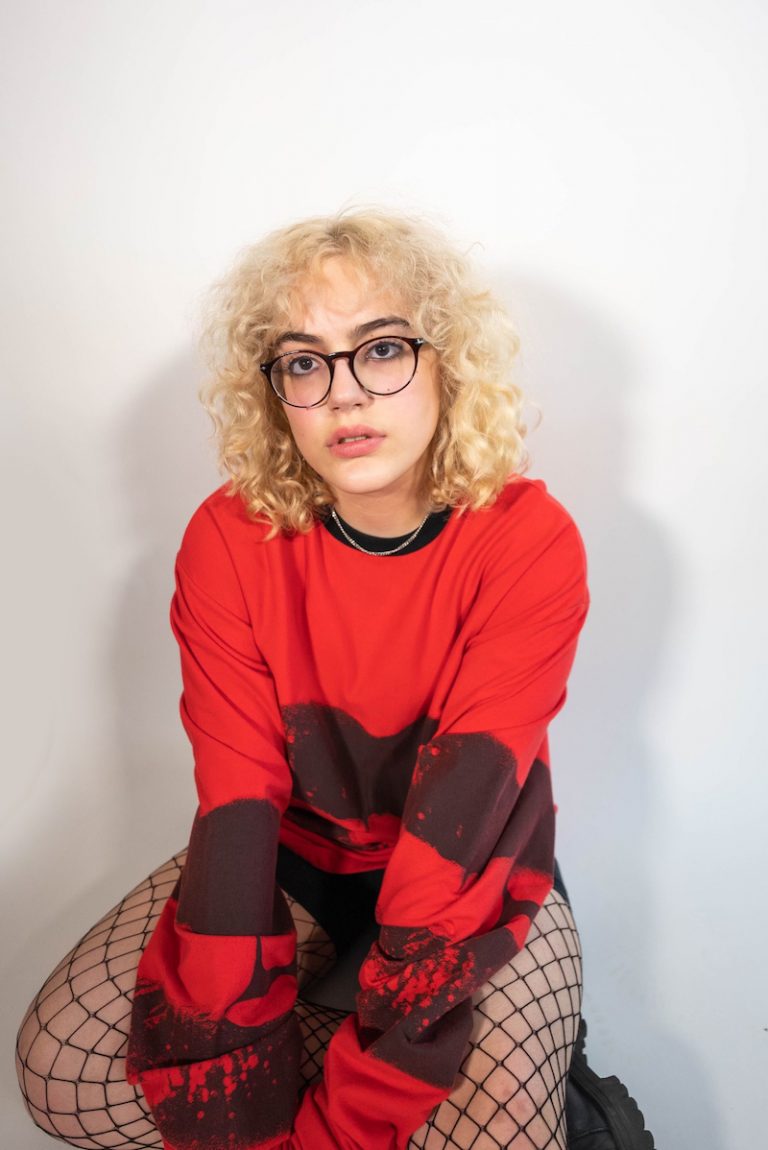 Simone is a 16-year-old singer-songwriter from New York City. Not too long ago, she released a lovely six-track EP, entitled, Love Lessons.

“‘Kissing Strangers’ is a buoyant, brilliant earworm exploring the rise and fall of young love in all its exhilarating, heartbreaking transience.” – Simone explained

“Are you bored of me yet? No for real, do I make you forget? All the nights spent alone in your bed, I’ll pave you the road. I’ve been hungry for someone to hold, wait any longer and I might explode. Hold on to the wheel ‘cause I’m losing control. Let go of your fears but don’t let me go. You should know that you’re no good for a girl like me. You should know you’re a danger to a girl like me.” – lyrics

“I really thought it’d be different like somehow, by a miracle. You grew 10 years in just 6 months, I really thought you were in it. Jumping through the obstacles like we’d make it through the rough. I’m counting every fight, I’m tryna find the pieces. Get one thing right but I can’t read your mind. I’m sick of falling into love, oh, so blind I do it every time. And, babe, you know I try but I can’t read your mind. Aren’t you the one that asked for this? As far as I remember it was your idea. It was your appeal. So why are you the one tryna ruin this?” – lyrics

“‘Everything/Nothing’ tells a story about young love from its beginning to its end. In the chorus, I play with the clichés of teen romance by contrasting them with the anxiety and pain that comes along with it. On the surface, the song is a classic love story, but there are a lot of underlying messages about the pressure and confusion that comes with being a teenager.” – Simone explained

‘Everything/Nothing’ tells a bittersweet tale about a young woman who shares a fading relationship with her significant other. Apparently, their teenage love eventually comes to an unpleasant ending, and now she’s asking her friends how her former partner is doing. Later, she admits that she regrets things that she said when she was younger.

“Boy of My Dreams”

“‘Boy of My Dreams’ is a song I wrote after ending a relationship that really damaged my perception of love. The song is a reflection on that experience as well as the opinions on love I had at the time. Everyone settles, everything ends, and even the boy of my dreams could turn out to be a disappointment.” – Simone explained

‘Boy of My Dreams’ tells a heartfelt tale about a young woman who experiences a severe breakup with her significant other. Apparently, she’s struggling to move on and lives in pain and regret. Also, it was extremely difficult for her to say goodbye to her ex, who she will surely think about for the rest of her life. Now, she desires to find someone better, someone, who will treat her with lots of love and respect. In the meantime, she creates the boy of her dreams in her imagination.

The EP ends with the enchanting, “Who Do You Think You Are?”

“Who Do You Think You Are?”

“I’ll leave through the back door, tiptoe my way through the cracked floors. And we’ll both go on with our lives, pretend everything’s fine, the way it was before. I won’t bother you anymore. You save me for when you’re feeling bored. It’s as if I’m letting you ruin me, just so I can get the reward. Who do you think you are?” – lyrics

Simone first fell in love with Broadway as a youngster. By the age of ten, she’d already appeared in a slew of musicals, and by the time she hit middle school, she was writing her own songs and performing regularly at New York open mic nights such as Sidewalk Cafe. It was at one of those early performances that Simone caught the attention of a New York-based producer, and soon she found herself recording in a proper studio and making waves across Spotify and social media.

With a mix of mesmerizing performance clips and down-to-earth, straight-to-camera videos documenting daily life, Simone went viral on TikTok. To date, she has accumulated over 221k followers and racked up millions of likes from fans around the world who could relate to both her unabashed ambition and dry, self-deprecating sense of humor.

“Every song on ‘Love Lessons’ tells a story about a relationship that ultimately isn’t built to last. All six tracks are written from different perspectives about experiences with love and heartbreak. I wrote all of these songs by myself in my bedroom, touching on vulnerable and way too relatable emotions. I’m really proud of the versatility showcased in this project, from pop songs to rock songs to ballads.” – Simone explained

We recommend adding songs from Simone’s “Love Lessons” EP to your favorite indie-pop playlist. Also, let us know how you feel in the comment section below. Mel Blanc’s famous catchphrase, “That’s All Folks!” Thanks for reading another great article on Bong Mines Entertainment. And always remember that (P) Positive, (E) Energy, (A) Always, (C) Creates, (E) Elevation (P.E.A.C.E).