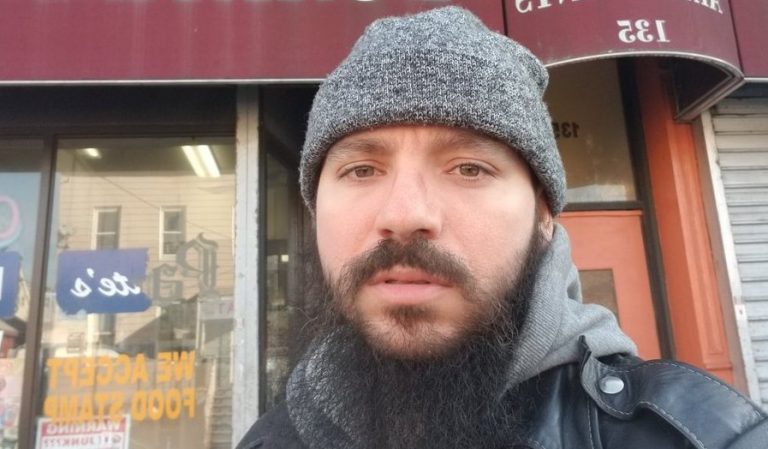 Casket D. is a rapper from Yonkers, New York. Not too long ago, his music video for “On the Surface” featuring NöEL won our 2/2018 Dope Music Video Showcase.

We interviewed Casket D., and he talked to us about life, overcoming obstacles, and his “Southie: Stories of Untold Truths Hidden in Existence” album.

Casket D.: Yonkers is a big city with a small-town feel in some instances. In the geographical sense, it’s one of the biggest cities in New York. But the hood is small. You know everyone who’s someone and they know you. It’s a very prideful place though. We’re proud to be from here, proud of our side of town (Southside or Northside), and proud of our block(s).

Also, we kind of have a chip on our shoulders due to being on the outskirts of the boroughs. Almost like they disregard us sometimes so that plays into that. But there’s a lot of untapped talent where I’m from though. Shout out to all the ones going for theirs.

Who are some of your musical influences and why?

CD: I was influenced super young from older dudes listening to the Wu, Nas, Big, MOBB Deep, Hov, Bone Thugs, and Pac. I got into southern rap through Outkast. Being from Y.O. of course, DMX and The Lox played a big influence on us. I still remember that red cassette that had a bunch of X songs and verses on it.

A lot of them ended up being on “It’s Dark and Hell Is Hot”. We used to knock that faithfully mad young. They all played parts in making me fall in love with Hip Hop along with others that I could go on for days naming them. 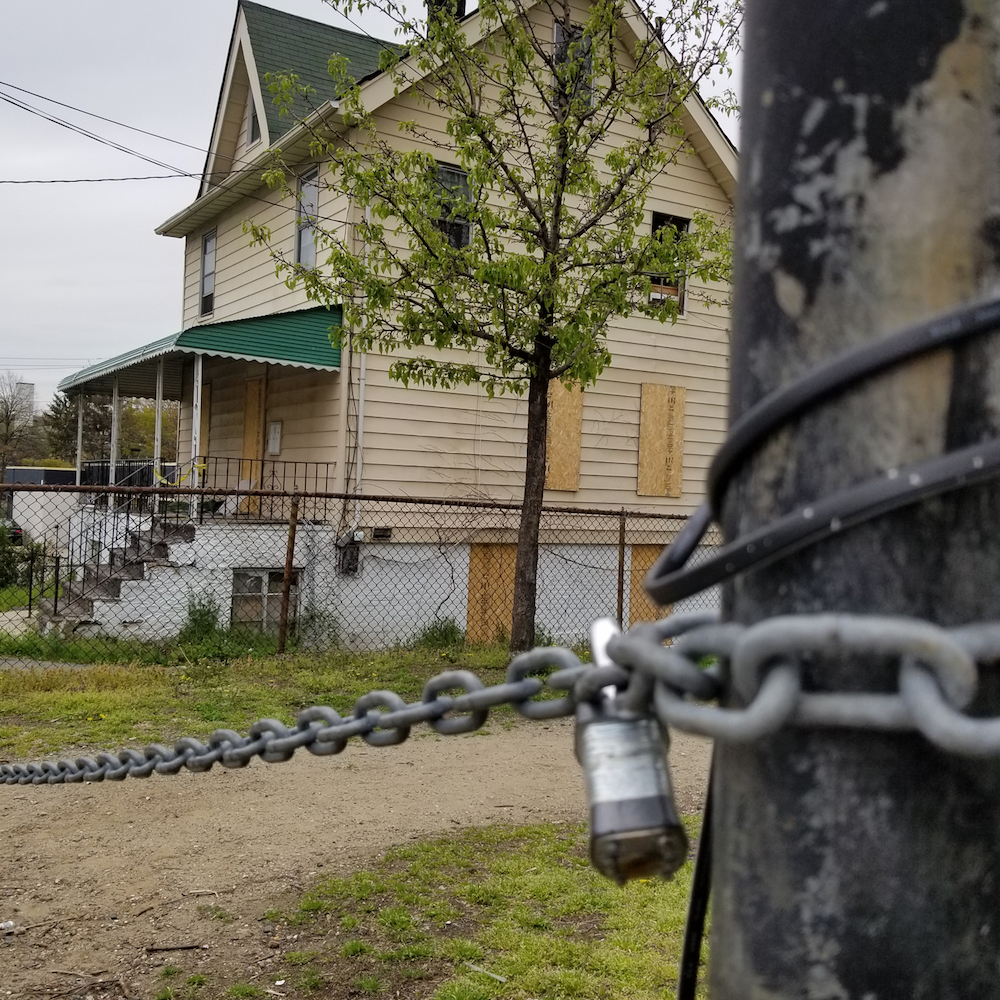 I was influenced to start rapping by my older cousin Mal and my older homies T, Dax (RIP), and Lungs. They all had me by about 5 years or better and were rapping so it was natural for me to do what the dudes I was running with were doing. Dax and Lungs loved to freestyle. Mal would write here and there and T was the one on it at the time. I started rapping, got groomed, and went nuts with it.

A few years later, my man J-black (RIP) got down with us and he was incredible. We fed off each other something crazy. We influenced each other big time. Since then I’ve been doing the influencing around my way.

Congrats on winning our 2/2018 Dope Music Video Showcase for your music video for your “On the Surface” song. Tell us about the video shoot?

CD: Thank you. I’m glad the people gravitated to it. The video was shot in my hometown of Yonkers. It was shot by DirectedbyEli and edited by Jaison Blackrose. Shout out to them. I thought of the treatment and we got to rolling.

The shoot was dope. It was a one-day shoot since there weren’t many location changes. I wanted the scenes to reflect a lot of what my verses were about on camera. I utilized my daughter and my lady predominantly in the scenes for the first verse and my homies in scenes for the second verse.

We knew it was the leadoff single for the album and had an idea it would hit immediately with the listeners. So, we shot the video prior to releasing the album and planned to drop it right after the album released. It was a good vibe that day. I loved driving the low rider and hittin’ them switches.

We had the blunts lit, some liquor flowing, and that shiny purple thing jumpin’ up and down, knocking a few of the album’s cuts behind the scenes. The weather was right and people were getting footage and flicks. It was just a dope time.

What’s “On the Surface” about?

CD: On the Surface is a record reflecting on things I internalized or feelings and thoughts I was having. Hence, no matter how things may seem, on the surface, there are always deeper layers to peel (pun intended).

I speak about my feelings of responsibility to get some of my homies off the streets and in a better situation with my talents. My frustrations at not being where I feel I deserve to be musically. Yet, at the same time, my reflection on how far I’ve come and what I’m making of myself. 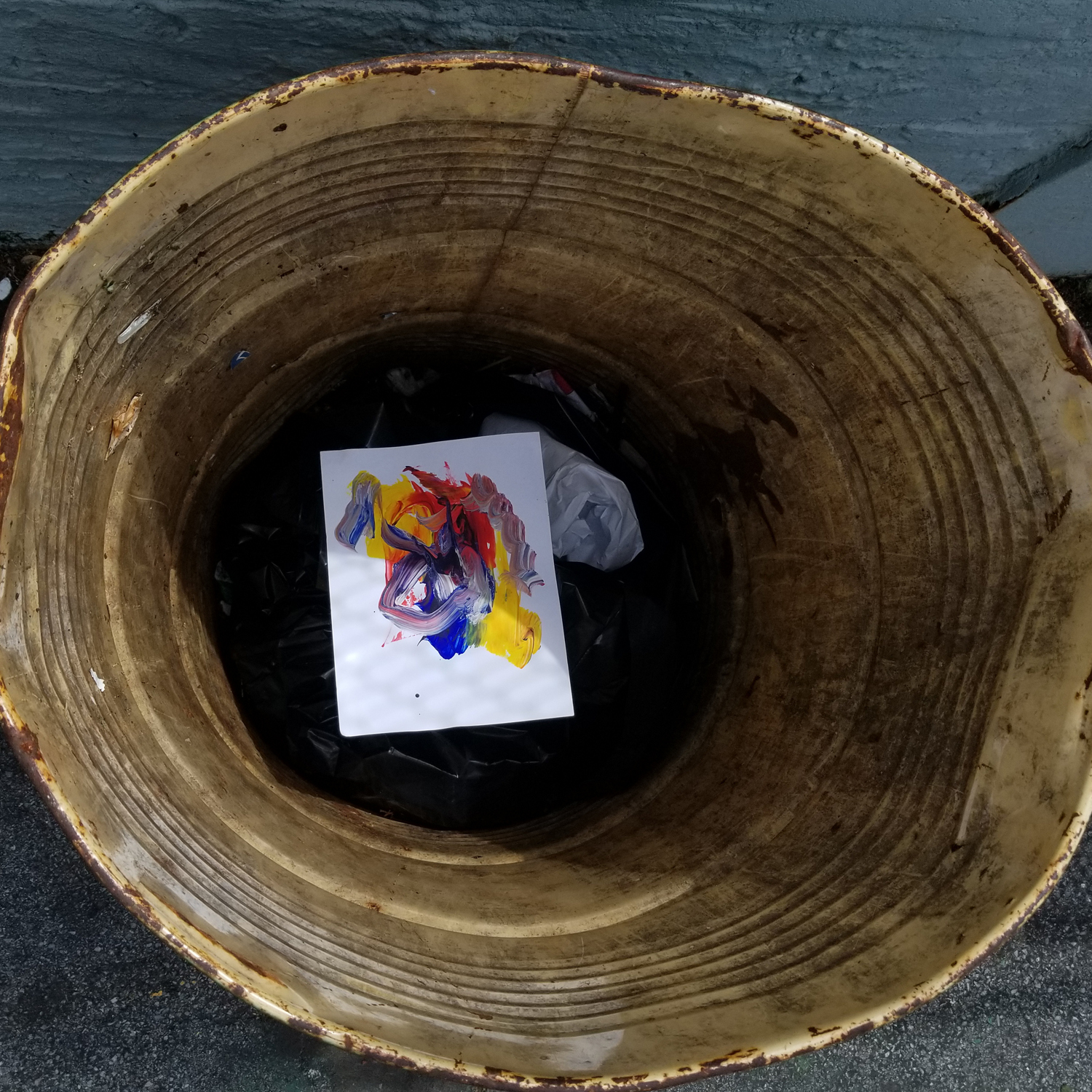 Also, it’s about women from my past seeing me happy with a family and wanting to resurface. New faces that my inner circle is bringing around that I’m wary about. My disappointment in them for embracing these people so much. My loyalty to those who’s been there since day one and been through the fire with me.

For a single, it’s relatable and filled with tons of substance. All while being incredibly melodic and infectious from its production to my homie NöEL featured on the hook. I take pride in that.

“On the Surface” is on your “Southie: Stories of Untold Truths Hidden in Existence” album. Tell us about it?

CD: Southie is my sophomore album. But it’s kind of like a debut full length because my first album, “The 80 Loafs LP“, was created as part 1 of a 3-part EP series.

That was originally intended to be my sophomore album and S.O.U.T.H.I.E was supposed to be a 5 to 6 track EP to bridge the gap and give the fans new music between albums. But I absolutely fell in love with the title, the artwork, and the few records I had for it at the time.

Also, the direction I wanted to take it wouldn’t allow it to just be a 5 to 6 track EP. So, I said f*ck it, I’m going all out to make a classic.

The title of the album is interesting. Why did you name it that?

CD: I’m from the Southside in my city. As I explained before, up above. I take extreme pride in representing not only Yonkers but specifically the Southside. Also, I wanted to take listeners on a trip to where I’m from with this album.

The album booklet is 6 pages altogether and are all pictures of the landscape in my neighborhood that played pivotal roles in my existence. 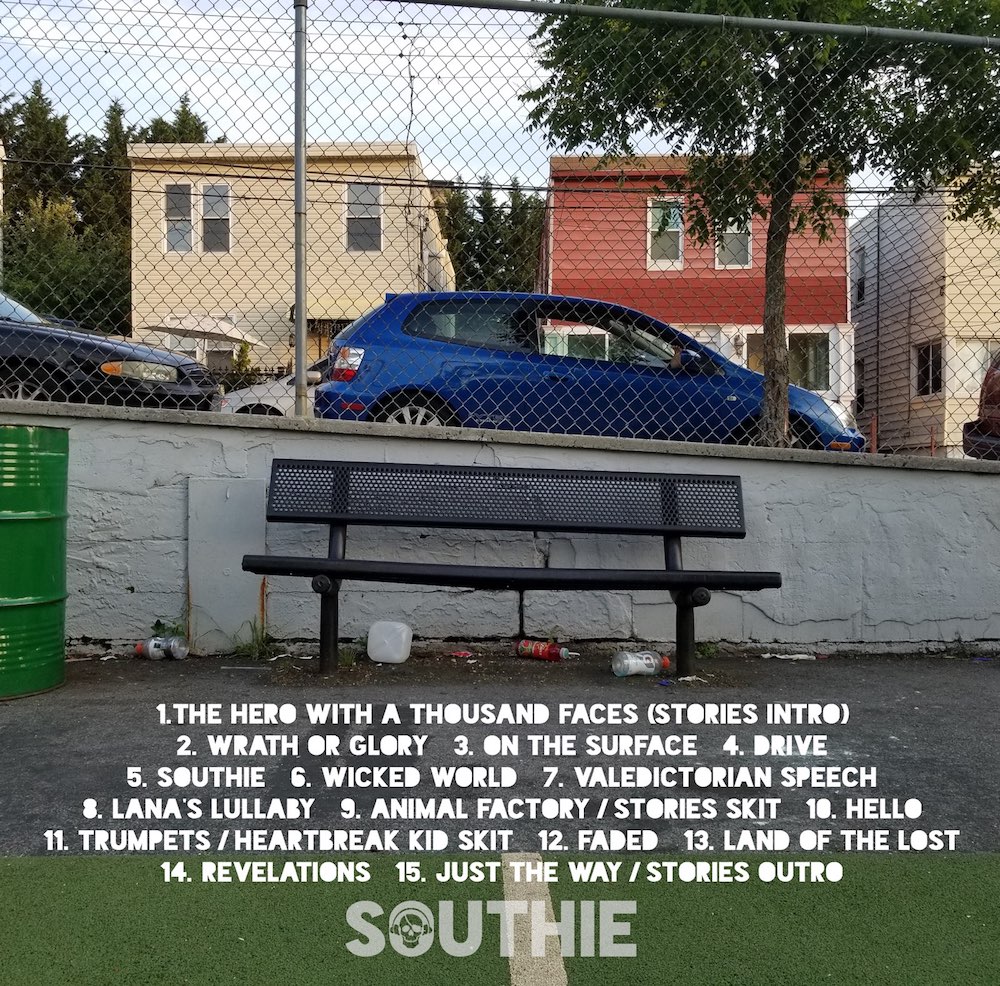 The back cover is the park bench I spent much of my adolescence sitting on, chilling, smoking, hustling, and so on. I reference that bench various times throughout the album. Most notably in the transition from the song “Drive” to the song “Southie”.

In the song “Drive” I was daydreaming on that park bench and I got woken up by my man to the reality that I’m still in the grimy setting of my hood on the Southside. I ended up explaining that on the following record, “Southie”.

What’s your favorite song on the album?

CD: My music is always so personal so it’s often hard to pick favorites. It’s almost like having children, you have different relationships with them all but love them the same. But if I had to choose (a few) [laugh out loud]. Probably, ‘On the Surface’, ‘Land of the Lost’, ‘Trumpets’, and ‘Valedictorian Speech’. They might change daily [laugh out loud]. Sometimes, ‘Wicked World’ and “Lana’s Lullaby” too.

CD: Rapping is a therapy for me. I make music for my soul not for the public for the most part. I’m just blessed enough that it has registered with the people enough for me to do this. But some obstacles I faced pertaining to my rap career is being an underdog at times. On the flip side, that has always been a great asset to me as well.

Other obstacles, being independent, I mean truly indie, is the investment part of things. Shooting visuals, marketing, etc. All that is out of your own pocket until it comes back in sales, bookings, merch, and so on. But initially, it’s on you so hopefully, you have a handful of solid folks in your team fully invested too.

Sadly, the reality of it is you’ll be 150 deep to a venue for a show, or in a video. But, be lucky to have three people willing to put in work and money for this sh*t with you. But I’m blessed for those who are dedicated. I appreciate them.

Any advice for an aspiring rapper?

CD: The music is the easy part. It’s what you do behind the scenes that’s the hard work. I never stop working, recording, and performing is only 20% of it.

A decade from now, when people mention your name, what will they say?

CD: I’d hope they be saying he’s one of the greatest to do it. I know the product and quality are there. I listen to my album, “S.O.U.T.H.I.E”, and my future albums, and I match them up with classic albums over the past 20 years. They stand head to head with any of them. Also, the people know it, and that’s what matters most. 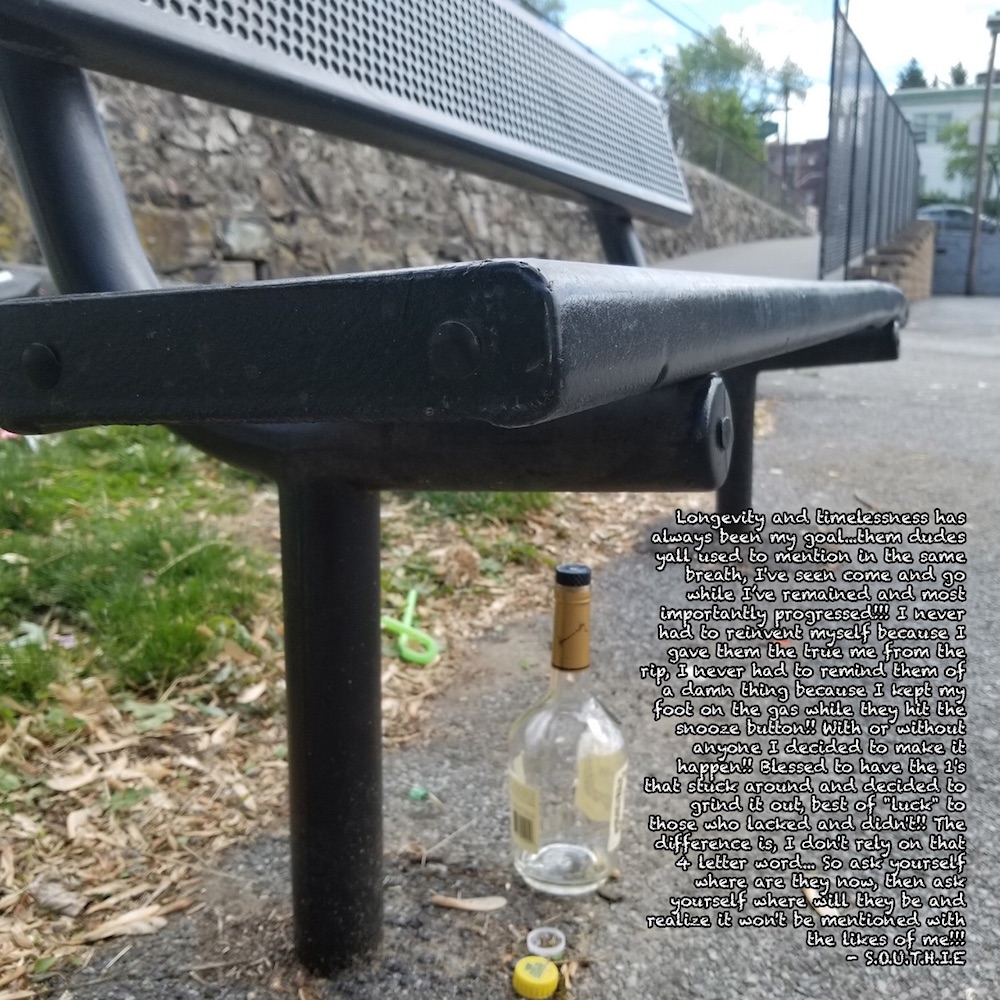 “I literally get at least one person a day telling me how my music changed their life or how classic it is and what not.”

Also, I would hope they’re saying Casket is a stand-up dude. He worked hard to accomplish his dream. He’s a great father, he gives back to his community, he gave many people opportunities, he accomplished all he set out to do, and he put his people on. God knows my heart is in the right place.

CD: I’m a huge sports fan. Most specifically football and basketball but not exclusively to the two, pretty much all sports.

Also, I’m particularly in the last few years a big movie buff. Robert Ebert with sauce!! [laugh out loud]. I enjoy watching highly rated movies, sleepers, and sh*t not just the blockbusters. Another thing is I write the treatments to and co-direct all my videos.

CD: Never give up on your dreams. A piece of you dies once you do. I see so many people walking around living but they’re not really alive. Work hard and give God the glory!! Also, subscribe to my YouTube, check out my visuals, absorb my albums, and I hope it has a lasting impact on you. 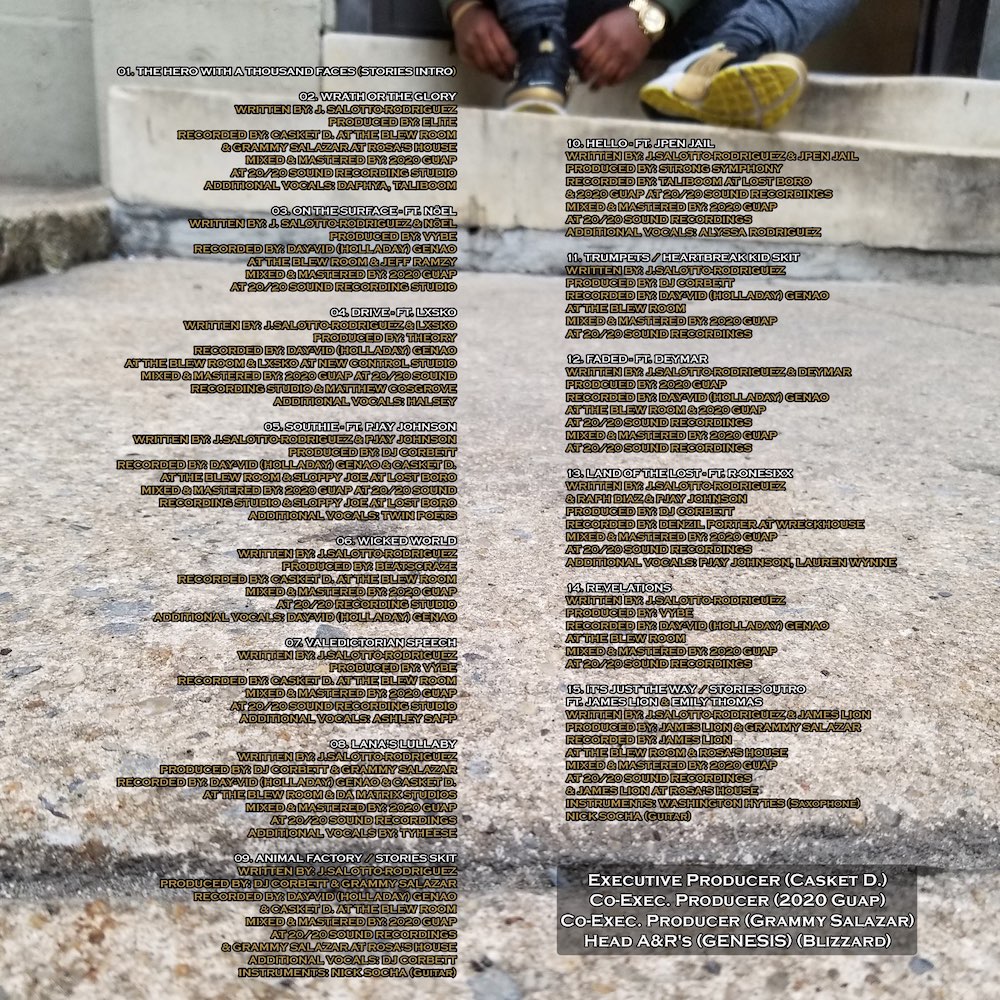