Britt Lari is a Peruvian-born multi-instrumentalist, songwriter, vocalist, and producer based in Los Angeles, California. Not too long ago, she released a spicy lyric video for her spectacular new single, entitled, “Wild,” co-produced with Dominic Lalli of Big Gigantic. The video contains a steamy segment from The Surprise Party episode from HBO Max’s “The Sex Life of College Girls (season 1, episode 8).”

“Got a little bit of sunshine, I’m not always such a downer doll. Kinda landed in a goldmine ever since I’ve let the good times roll. People say I like some weird things, isn’t that really the point in life? Take it easy with the heartstrings. Oh wow, spin my head all over, I’ll be up at night. So much to discover ’til I hit the lights.” – lyrics

‘Wild’ tells an intriguing tale about a young woman who finds herself cruising down Main Street during the nighttime hours. Apparently, she’s grooving to some music and zooming past one green light after another. Life is good, and she’s happily singing loudly out of the window, “I’m going wild ‘cause I have soul. We’re here to go live, put on a good show. Hang for a while, I’m on a roll. We’re loving those vibes and that’s all I know.”

“How you doing with the real me?”

“‘Wild’ is a special track because it allowed me to immerse myself in it from every angle. I literally went wild with production and had a blast expressing my personality with the writing and singing. Inspired by Big Gigantic, I had to send it over to Dom Lalli and he ended up adding his touch of production which took the track to a whole new level. As if getting to work with one of my role models wasn’t enough, this track also surprised me by landing a sync placement on HBO Max’s ‘The Sex Live of College Girls’ through my sync agency, Low Profile NYC. I could not be more grateful to Dom, Low Profile, and DK Projects for helping me bring this project to life!” – Britt Lari explained

Britt Lari has nearly one million monthly listeners and 47 million streams on Spotify alone. She has celebrated releases spanning prominent label giants like Universal Music Group, Warner, and Sony Music. Britt grew up as a skilled pianist and internationally recognized gymnast. Beyond her eclectic and multi-talented upbringing, Britt began her ascent to musical stardom in 2020 with a slew of releases from her debut single, “Our World,” to other breakout hits like “All of Me,” “Closer,” “Faded,” and countless others.

Since her debut, Britt Lari has meticulously refined her craft to unearth a signature sound designed to touch the lives of millions of music fans across the globe. In only two years, she not only inked major labels but simultaneously hollowed out a lane for herself in the dance music landscape with releases on Lowly., Armada Music, NCS, and STMPD Records. 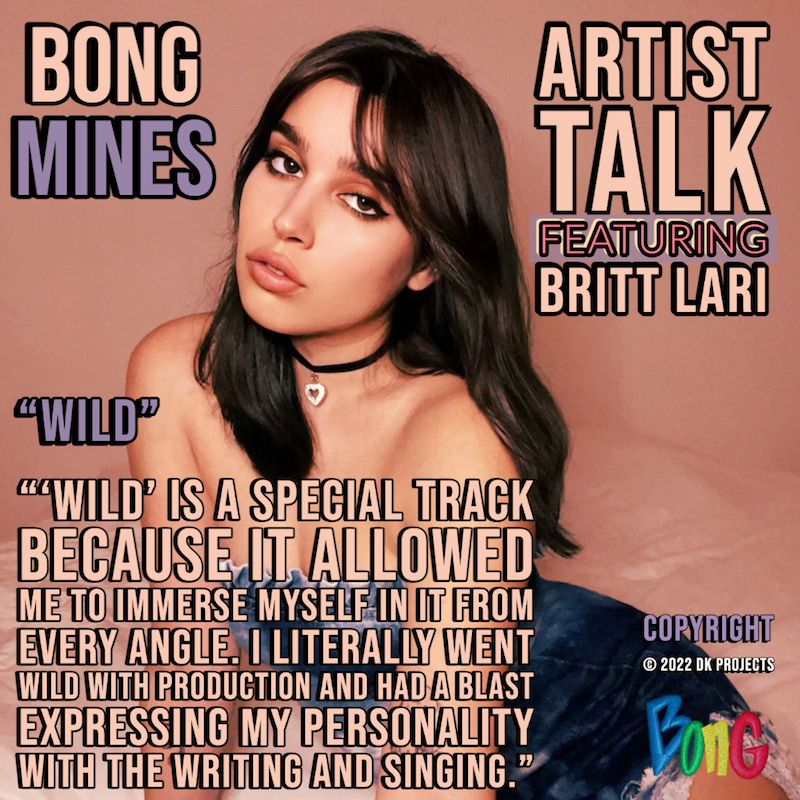 It’s safe to say that Britt Lari has earned the trust and respect of the greater dance music industry and some of its top players. Her musical versatility has landed her sync deals with brands like Nordstrom, Alienware, and Alo Glow, alongside TV syncs with Netflix’s Lucifer, and a forthcoming commercial with Hyundai.

“Never one to give an empty smile.”

We recommend adding Britt Lari’s “Wild” single to your favorite electro-pop playlist. Also, let us know how you feel about it in the comment section below. Mel Blanc’s famous catchphrase, “That’s All Folks!” Thanks for reading another great article on Bong Mines Entertainment – the hot spot for new music. Furthermore, always remember that (P) Positive, (E) Energy, (A) Always, (C) Creates, (E) Elevation (P.E.A.C.E).