St. Lucia is a band led by the husband-and-wife duo, Jean-Philip Grobler and Patti Beranek. Not too long ago, they released a lovely visualizer for their sensational retro-alternative tune, entitled, “The Golden Age.”

“‘The Golden Age’ is always accessible to you. You can blame social media or politics. At the end of the day, we can all somehow find stillness within.” – Jean-Philip Grobler stated

‘The Golden Age’ finds St. Lucia singing about being “afflicted by the noise of voices in our minds.” According to the band, we walk a very thin line every day, and for most of us, “time hasn’t been so kind.” However, with love comes the hope that through the haze, a ray of golden light will usher us into the golden age. Jean-Philip sings, “You pull me closer, I feel the blood rushing to my head. And at this moment, I don’t really care if I’m alive or dead.” 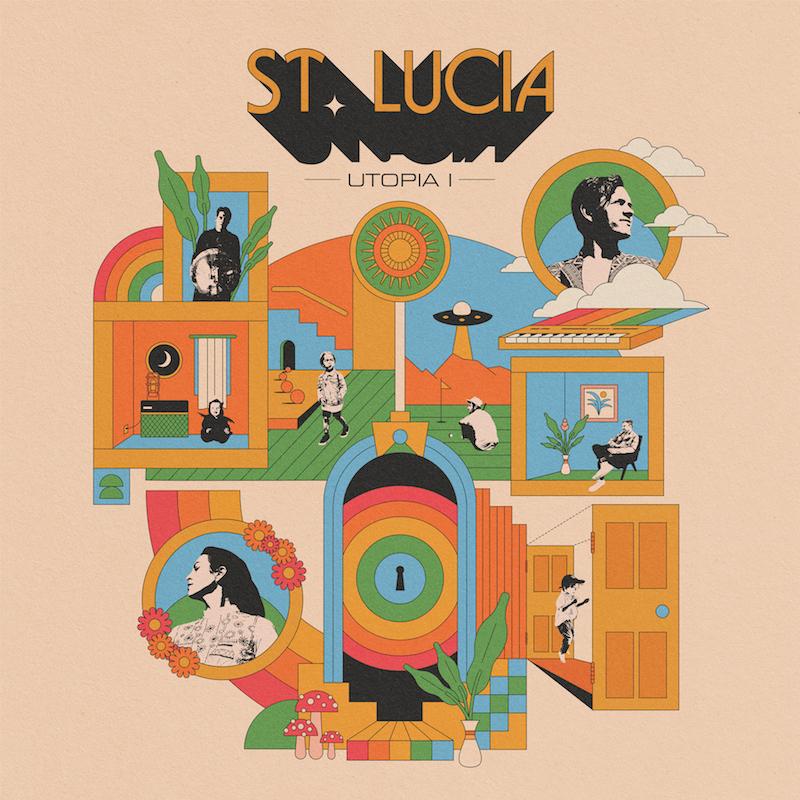 “In a way, this is my rebellion against the darkness of the world. From the beginning, the name St. Lucia came from me making escapist music. In South Africa, there’s a place called St. Lucia, and it’s similar to the island in the Caribbean because it’s where you escape. It’s utopia. There are many ideas of utopia, whether it means virus-free or a virtual tech utopia. It’s easy to feel depressed these days, so I’m trying to bring something joyous to the world. I was sick of seeing stuff on the Internet, and I just wanted to feel good. That’s what being human is about. We have to feel alive, no matter what is happening around us.” – Jean-Philip Grobler explained

Inspired by everyone from David Bowie, The Weeknd, Daft Punk, and Parcels, Jean-Philip wrote and recorded at a feverish pace. Later, the band enlisted the mixing talents of trusted collaborator, Chris Zane [Passion Pit, The Walkmen], and buttoned up their first new music in four years.

The opener, “Separate World,” rides shimmering keys, handclaps, and a propulsive groove followed by the retro-pop track, “Another Lifetime.” Elsewhere on the EP is the first single, “Rocket On My Feet,” which hinges on high-register vocals underlined by neon-hued disco keys, and “Memory,” the EP closer that unfurls like a dreamy night-time lullaby. Furthermore, “Utopia I” contains colorful disco, ‘70s funk, and ‘80s pop elements. Also, the project possesses a luminous palette of synths, pulsating with vibrant sonics that has come to characterize St. Lucia’s genre-defying career.

Alongside the EP release, St. Lucia shares details of their Fall 2022 North American tour. The run begins in Boston on October 10 and ends on November 15 with a hometown show at Brooklyn Steel. Renowned for their energetic live shows, this six-week tour is St. Lucia’s first full headline run in four years. For the full set of dates, more information, and tickets, please visit stlucianewyork.com/live. 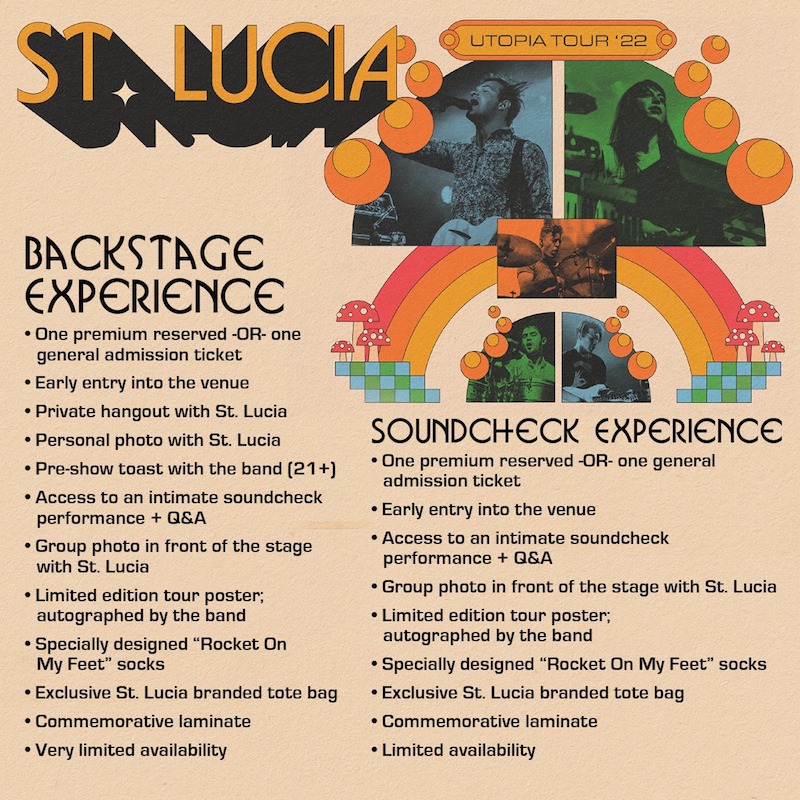 St. Lucia has stayed faithful to what they’re best at putting on incredible live shows everywhere from Coachella to Kansas City, producing shimmery synth-driven pop grooves, and having a good time doing what they love. St. Lucia has always stirred good vibes. It started with their debut album, “When The Night,” which entered the Billboard Top 200 and hit #6 on Billboard’s Heatseekers Album chart.

The follow-up album, “Matter,” yielded the hit, “Dancing On Glass,” while the band collaborated with Jack Antonoff, RAC, and others. In a nutshell, St. Lucia beams out a light of their own and they are now shining brighter than ever with their latest EP, “Utopia I.”

“I feel really proud of the EP. I think there is purity in it that you can’t describe. You just have to listen and feel it. I think that this comes from having another child, being parents, and being thrown into a weird time in our lives. It unleashes things, and I think we did a good job capturing that.” – Patti Beranek explained

We recommend adding St. Lucia’s “The Golden Age” single to your favorite alternative playlist. Also, let us know how you feel about it in the comment section below. Mel Blanc’s famous catchphrase, “That’s All Folks!” Thanks for reading another great article on Bong Mines Entertainment – the hot spot for new music. Always remember that (P) Positive, (E) Energy, (A) Always, (C) Creates, (E) Elevation (P.E.A.C.E). Contact us on social media via Twitter, YouTube, Instagram, or Facebook, and let us know what’s going on. “Disclaimer: This post contains Apple TV and Apple Music affiliate links. When you buy through links on our site, we may earn an affiliate commission.