Celebrating over 25 years at the pinnacle of hip-hop, it’s been a career that has seen the Doggfather cement his undisputed influence on music with chart-topping, multi-platinum records. Also, he has solidified his importance to wider culture as an actor, businessman, and more across the board.

The tour sees Snoop Dogg enlist a selection of his key collaborators from the breadth of his iconic music career including West Coast hip-hop royalty; Warren G, Tha Dogg Pound, Obie Trice, and D12. They will also be joined by the multi-million streamed Irish rap duo, Versatile. Snoop Dogg collaborator and platinum-selling rapper Xzibit will join the tour for the dates in Scotland and England. Tickets can be purchased here.

West Coast rap legend Snoop Dogg has come a long way since being discovered by Dr. Dre in early 1990. As impressive as he was when guesting on Dre’s “The Chronic” in 1992, few could have guessed he’d go on to global fame, tens of millions of record sales, and a career in movies and TV. And that’s only part of the story, from battles with the law to reinvention as a reggae artist.

He was born Cordozar Calvin Broadus Jr. in Long Beach, California, on October 20, 1971. His “Snoop Dogg” nickname came from his mother because she thought he looked like Snoopy from the Peanuts cartoon. He played piano and sang at his local Baptist church, before starting rap in the sixth grade.

After graduating high school, Snoop was arrested several times for drug possession and spent time in prison. He was also associated with the Rollin’ 20 Crips Gang. He started making music as a way out of his troubles and recorded early demos with his cousin Nate Dogg and friend Warren G as 213. A track on one of these came to the attention of Dr. Dre who invited Snoop — then rapping under the name Snoop Doggy Dogg — to audition. From there they collaborated on a song called “Deep Cover” for the soundtrack of the film of the same name; and Snoop became the key rapper on Dre’s hugely successful first solo album, “The Chronic.” 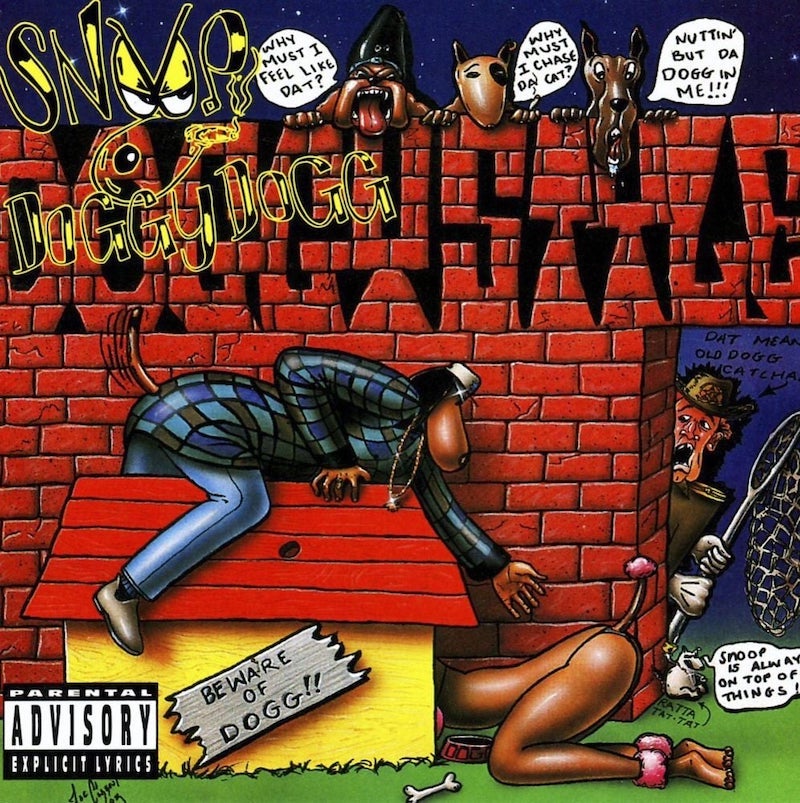 Next came a short film called “Murder Was the Case,” the soundtrack of which went double platinum. Snoop’s next album, “Tha Doggfather” (1996), also reached the top of the charts, despite the absence of Dre, who had left Death Row over a contract dispute. Snoop then left Death Row himself, falling out with label mogul Suge Knight and moving to Master P’s No Limit Records.

Snoop scored the top slot on the hip-hop charts with his next two albums: Da Game Is to Be Sold, Not to Be Told (1998), and No Limit Top Dogg (1999). His last album for No Limit, “The Last Meal,” came in 2000 and sold over 2 million copies. By now his sound had become less “gangsta rap” and somewhat smoother.

Snoop Dogg enjoyed a big hit in 2004 with the chart-topping single, “Drop It Like It’s Hot,” which sparked several fruitful collaborations with Pharrell Williams. He reunited with Warren G and Nate Dogg as 213 to drop the album, “The Hard Way,” in 2004. In 2007, Snoop became the first artist to release a track — “It’s The DOG” — as a ringtone prior to its release as a single.

Later, Snoop branched out into acting during the same period and appeared in several films, including Starsky & Hutch, The Wash, and Training Day. Also, he made guest appearances on television shows, including The L Word and Weeds, and starred in his own E! reality show, Snoop Dogg’s Father Hood, in 2007.

Snoop was part of a sketch show, Doggy Fizzle Televizzle, and participated in the Comedy Central Roast of the future president Donald Trump. He also uses his likable laconic personality to good effect in a new venture for VH1, Martha & Snoop’s Potluck Dinner Party, where he and Martha Stewart host dinner parties for various celebrities.

Outside of music, Snoop has made investments in the burgeoning cannabis business. In November 2015, he launched Leafs By Snoop, becoming the first A-list celebrity to brand a line of cannabis products. That same year he also launched a new digital-media venture called Merry Jane, which focuses on the latest marijuana news. In May 2017, Snoop dropped his fifteenth studio album, “Neva Left.” He also released a gospel album, titled, “Bible of Love,” in March 2018.

Snoop is held in high esteem and affection by hip-hop fans worldwide and is one of the most recognizable faces and voices of the whole genre, even to those who don’t listen to his music. He has the distinction of having the most Grammy nominations of any music artist— 17 to date — without having won one. But as Snoop Dogg shows few signs of retiring, don’t write him off just yet.

We recommend adding Snoop Dogg’s “Gin and Juice” single to your favorite hip-hop playlist. Also, let us know how you feel in the comment section below. Mel Blanc’s famous catchphrase, That’s All Folks! Thanks for reading another great article on Bong Mines Entertainment – the hot spot for new music and entertainment news. Always remember that (P) Positive, (E) Energy, (A) Always, (C) Creates, (E) Elevation (P.E.A.C.E). Contact us on social media via Twitter, YouTube, Instagram, or Facebook, and let us know what’s going on. Disclaimer: This post contains affiliate links. If you make a purchase after clicking a link, we’ll collect a share of sales or other compensation.