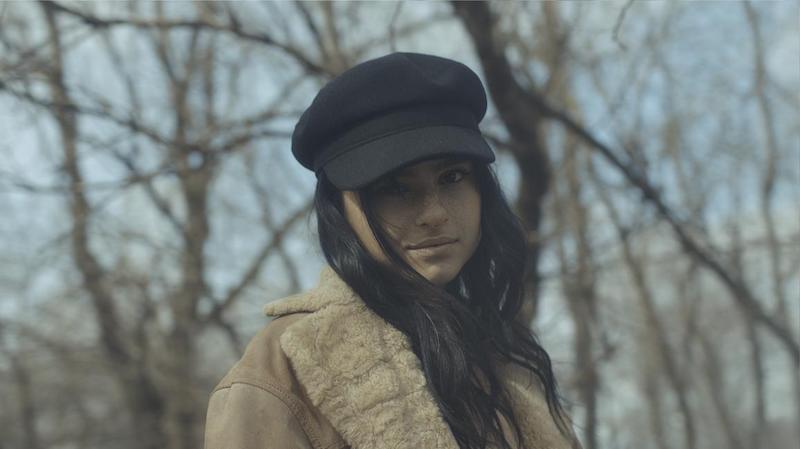 Ren (Lauren for long) is a 16-year-old singer-songwriter from Toronto, Canada. Not too long ago, she released a lovely left-pop tune, entitled, “Mind Games”, produced by Jeff Hazin.

“I’m a big fan of Tim Burton films and the eeriness that a lot of his films encompass. I wanted that same feel for my video and to me, that started with our location. My grandparents live on a farm. Their house was built in the 1800s and they are antique buffs. There was so much eye candy to choose from. The floors creaked every time you’d walk. The house had the original wallpaper and paint on the walls not to mention a weird smell that would appear every now and then.” – Ren

‘Mind Games’ tells an interesting tale of a desirable young woman who is involved in an action-packed relationship with a freaky young guy who loves playing silly games. Apparently, she does too because she sleeps inside his brain, has her shoes on in his bed, and her picture on the wall. Later, she admits that she’s the riddle that he can’t solve, and she likes that attention. Also, the mind games being played keep both of them entertain and adds excitement to their blossoming relationship.

“I tried to incorporate this creepiness into a love song so that it’s not just a mushy song about love. It’s more freaky in how literal it is which was really fun for me to do. Lines like ‘little bits of life flood in every time you smile’ is my way of painting a picture for a listener and creating this world where I’m really in someone’s head.” – Ren

“I’ve always been fascinated by movies from directors like Guillermo Del Toro and Tim Burton. I like the movies made for kids, that aren’t just fairytales, they introduce a new emotion to the genre of ‘kids movies’ that I think is so interesting and intriguing.” – Ren

Not too long ago, Ren made a big splash with her debut single, entitled, “Waves”. So far, the likable tune has amassed over 800,000 streams online.

We recommend adding Ren’s “Mind Games” single to your personal playlist. Also, let us know how you feel about it in the comment section below.