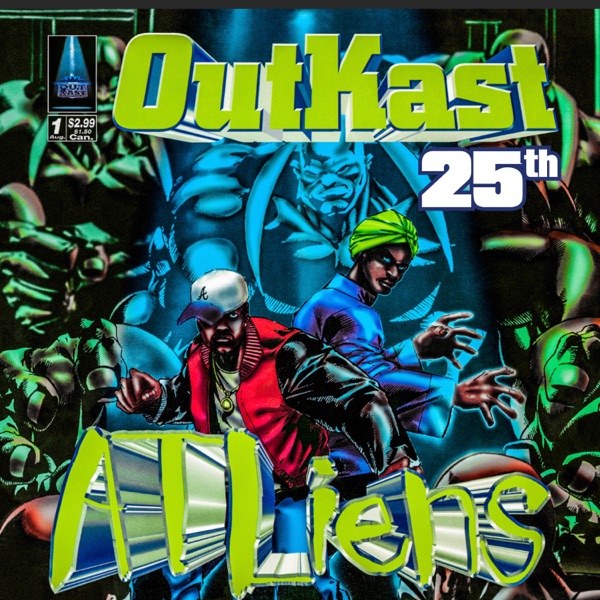 The 25th anniversary ATLiens single bundles includes the album’s singles, “Elevators (Me & You),” “ATLiens,” and “Jazzy Belle.” The videos for each of the songs were upgraded to HD as part of the celebration. ‘Elevators (Me & You)’ recently achieved certified RIAA platinum. Also, the song joins the single, “ATLiens” (RIAA gold), and the album, “ATLiens” (certified RIAA double platinum).

Legacy released a limited edition 25th Anniversary 4 LP 12″ vinyl edition of ATLiens. The limited edition will include the original release on 2 LPs. Also, it will contain the previously unavailable instrumental album on 2 LPs.

Coming to you from Vinyl Me, Please (VMP), in association with SME, is the “extraterrestrial-straight from ATL” sophomore album from Outkast, ATLiens.

Vinyl Me, Please will feature The 25th Anniversary Edition of ATLiens as Hip-Hop Record of the Month for August 2021. Also, the album will be available to VMP members on 2 LP Neon Green and Blue Galaxy vinyl. This album was mastered at half speed. Plus, it includes an exclusive Listening Notes booklet for an overall listening experience that is out of this world. Join Vinyl Me, Please as they explore new galaxies of sounds that are lost and found to create transcendent tangible music experiences.

Get On Down is releasing an exclusive bundle including a 4 LP set housed in a custom gatefold jacket. Plus, the bundle will include printed inner bags pressed on standard black vinyl. Also, the Get On Down set includes the “ATLiens” original vocal album and the full-length instrumental album.

Exclusive to Get On Down is the Glow In The Dark big hole 45. The vinyl will feature the singles, Elevators b/w ATLiens. Plus, it will be housed in a custom printed inner sleeve and miniature outer jacket facsimile of the commercial 12″ release. Furthermore, this 45 vinyl pressing will be limited to 3000 copies only. Pre-order the Get On Down anniversary vinyl bundle here.

Merch Traffic curated an e-commerce collection to commemorate the “ATLiens” album. The collection features custom-made pieces and hand-drawn artwork. Also, it contains a variety of unique novelty items specifically made for the 25th Anniversary. Items can be found at Outkast-Shop.

With “ATLiens,” Outkast focused an outer space-inspired musical lens on 1996 Atlanta street culture. Also, the duo found common ground in a range of characters from hustlers to extra-terrestrials.

“’ATLiens’ is one of the greatest hip-hop albums of all time.” 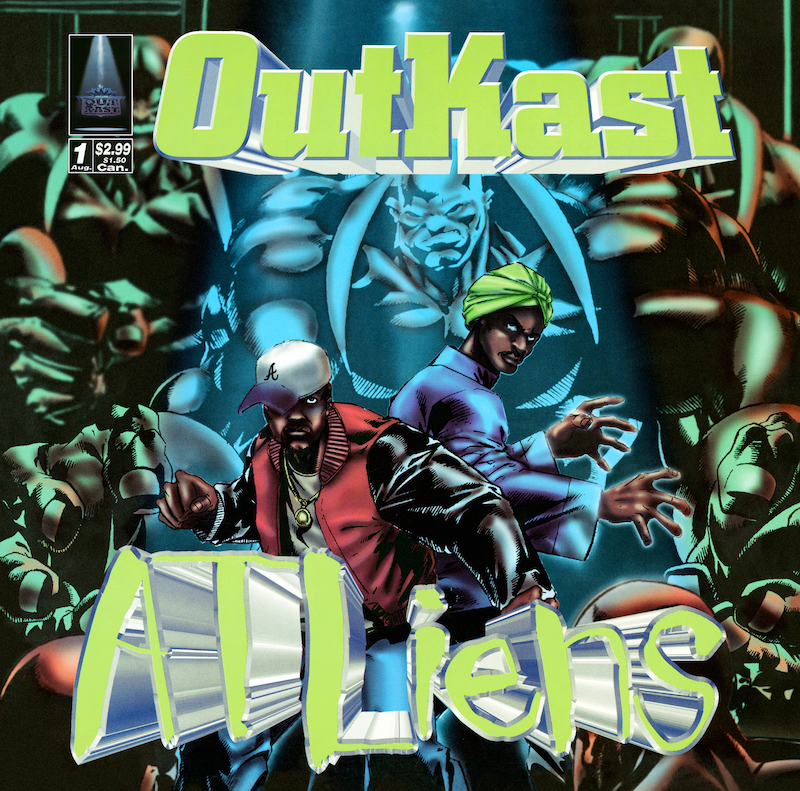 LaFace Records released ‘ATLiens‘ on August 27, 1996. The album entered the Billboard 200 chart at #2. Also, it sold nearly 350,000 copies within two weeks of release. Plus, “ATLiens” has been certified double platinum by the RIAA, for shipments of two million copies in the United States. Furthermore, the album generated the hit singles, Elevators (Me & You), ATLiens, and Jazzy Belle.

We recommend adding songs from Outkast’s “ATLiens” album to your favorite hip-hop playlist. Also, let us know how you feel in the comment section below. Mel Blanc’s famous catchphrase, “That’s All Folks!” Thanks for reading another great article on Bong Mines Entertainment – the hot spot for new music and song reviews. Furthermore, always remember that (P) Positive, (E) Energy, (A) Always, (C) Creates, (E) Elevation (P.E.A.C.E).