Liv Charette is a rising Nashville-based singer-songwriter from Canada. Not too long ago, she released a powerful glam-pop anthem, entitled, “Red Flags White,” produced by Logan Maggio. The song is Liv Charette’s sixth single and her first release since unveiling her 2021 remake of Tina Turner’s hit single, entitled, “I Don’t Wanna Fight.”

“Can’t fall asleep, it’s never been easy for me to be alone. You know you caught me at a low. This ain’t about closure, I’m already over you. So what’s there left to do? I’m bleaching those red flags white, ignoring all the warning signs. We don’t need to think about it forever, just a couple of hours caught in the sheets together, that’s fine. Don’t waste time, put your body on mine tonight, we’re bleaching those red flags white.” – lyrics

‘Red Flags White’ tells an intriguing tale about a young woman who can’t resist the temptation of being intimate with someone who she shouldn’t be intimate with. Apparently, when it comes down to romantic love, they are an extremely toxic pair. Therefore, it’s very dangerous for her to even entertain the not-so-good idea of them being romantically involved. 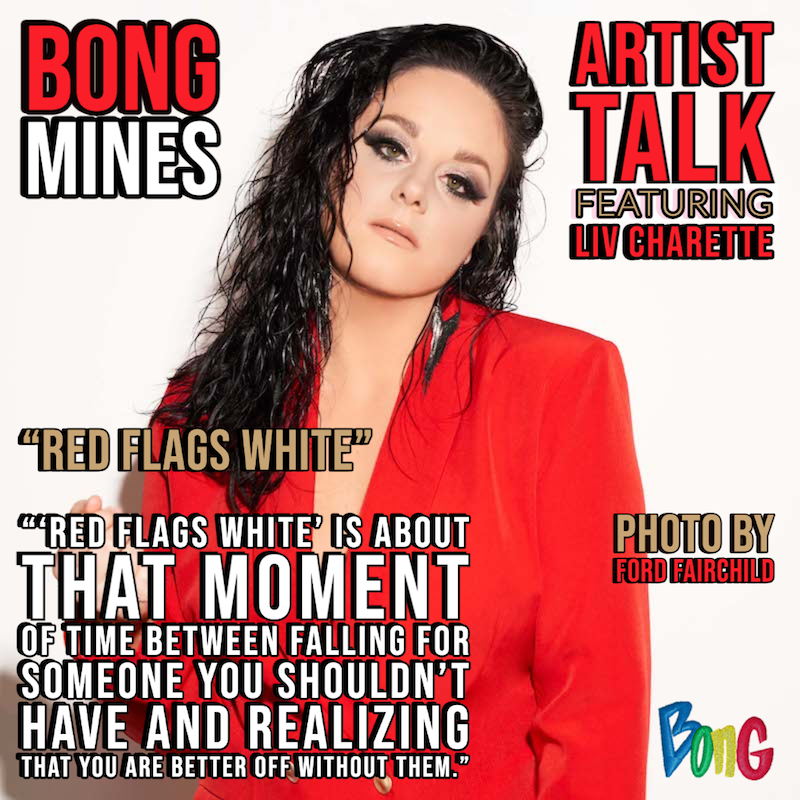 “The inspiration for ‘Red Flags White’ came in the most unexpected way – on Valentine’s Day-themed Peloton ride with Kendall Toole. She talked about the phase of a relationship where we ‘bleach the red flags white’ because even though we know someone is bad for us, we brush it off and ignore the red flags, thinking it’s probably all just in our heads. ‘Red Flags White’ is about that moment of time between falling for someone you shouldn’t have and realizing that you are better off without them.” – Liv Charette explained

A fitness expert, influencer, and key Peloton personality, Kendall Toole, caught wind of the song via TikTok. She posted a reaction video to Charette sharing the story behind the song and how her class influenced its creation. “I want to hear the whole thing!” Toole exclaimed in the video as Charette makes her way through the chorus.

“This ain’t about closure, I’m already over you.”

It’s not a big surprise that Charette found love from one of the song’s muses on TikTok. With more than 200,000 followers on the app, and over two million likes on her videos, Charette has been wowing audiences across the globe as a charismatic entertainer.

Liv Charette grew up with big Olympic dreams. A former figure skater, she spent 11 years on the ice before discovering her passion for singing. After the first time she sang in front of a crowd, she traded her skates for a microphone.

Liv’s viral success on TikTok with her Tiny Mic series, “One Word Song Challenge,” landed her a feature on New York Magazine’s The Strategist. Also, her weekly Liv: In the Moment podcast, the first of its kind on RIFF, has included guests who are influencers, gamers, recording artists, music industry executives, celebrity makeup artists, and more. In October 2021, Liv was invited to perform at the Rock and Roll Hall of Fame to celebrate Tina Turner’s induction and launch the museum’s latest digital series.

We recommend adding Liv Charette’s “Red Flags White” single to your favorite pop playlist. Also, let us know how you feel about it in the comment section below. Mel Blanc’s famous catchphrase, “That’s All Folks!” Thanks for reading another great article on Bong Mines Entertainment – the hot spot for new music. Always remember that (P) Positive, (E) Energy, (A) Always, (C) Creates, (E) Elevation (P.E.A.C.E). Contact us on social media via Twitter, YouTube, Instagram, or Facebook, and let us know what’s going on. “Disclaimer: This post contains Apple TV and Apple Music affiliate links. When you buy through links on our site, we may earn an affiliate commission.