Juli Chan releases a cinematic music video for her sensational pop single, entitled, “Not A Crime”

Juli Chan is a rising singer-songwriter from Poland. Not too long ago, she released a cinematic music video for her sensational pop single, entitled, “Not A Crime.” Self-described as an international debut, “Not A Crime” is Juli’s first release in English. However, she doesn’t come across as a newcomer because Juli is somebody who has been refining her craft for a long time. Also, for the first time in her career, she co-created her song with a Swedish duo of authors and composers.

“Not tryna complicate, but my mind is always going the wrong way. Looking like a hopeless case, I’m too much of simply everything. Said I would take it chill, but it’s so obvious that you moved on quickly. Now I’m spillin’ all the tea before I drink a single thing. And I’m back and forth, yeah, with the dos and donts. But it still ends up with what I know. I’m always gonna be somebody checking on my phone just to see if you called me.” – lyrics

The sepia-tinged music video gives an air of mystery to Juli Chan, who wrote the song in collaboration with Swedish producers, giving the song irresistible Euro-pop energy. An iridescent track with larger-than-life synths and blissful vocal deliveries, fans of Zara Larsson and Anne-Marie will relish Juli’s chart-worthy sound.

The video has a distinct vintage feel, with smooth shots over a chess board showing that Juli is carefully deciding her next move. The video takes inspiration from the “immortal game,” a game of chess played in 1851 in London and famous for its daring moves that go against what we all know about chess. A player gave up both rooks and a bishop and then his queen, checkmating his opponent with his bishop with two minor pieces remaining. It appears Juli is approaching her music career in the same way—daring, bold, and unapologetic.

“I don’t feel it less, only getting closer to my king in chess.”

“This is my first release in English, and I co-wrote the song with a duo of Swedish writers and composers. Seeing the reaction it would get was something I was looking forward to. I believe we’ve all been lost in our emotions at times, wondering about the next move, and when overwhelming thoughts run through our heads, we should hold our heads held high, stay true to our values, and never compromise our honor. It’s not a crime at all. So, this is a story that has been written down and framed as song lyrics.” — Juli Chan explained

‘Not A Crime’ is a daring song about a young woman who is deciding the next move in a relationship with her significant other. So much thought and stress go into saying the right words or wearing the right thing, we tend to hyper-fixate on what we should do. Even though explaining our situation and decisions to our friends might make us sound kind of crazy, in the end, it’s not a crime to care and put effort into someone. And how many times have we all been waiting on that text or call and constantly checking our phones? Juli Chan is here to reassure all listeners who are feeling confused that it’s okay to be kind of obsessive when trying to figure out what to do next.

‘Not A Crime’ hovers above a relationship-based narrative, relatable lyrics, and ear-pleasing vocals that will resonate well with fans of Ariana Grande and Billie Eilish. The likable tune possesses lush instrumentation flavored with contemporary, international, and electro-pop elements. Furthermore, the lyrics of “Not A Crime,” inspired by many stories of people in love, provide food for thought and allow everyone to identify with it.

“Not A Crime” single 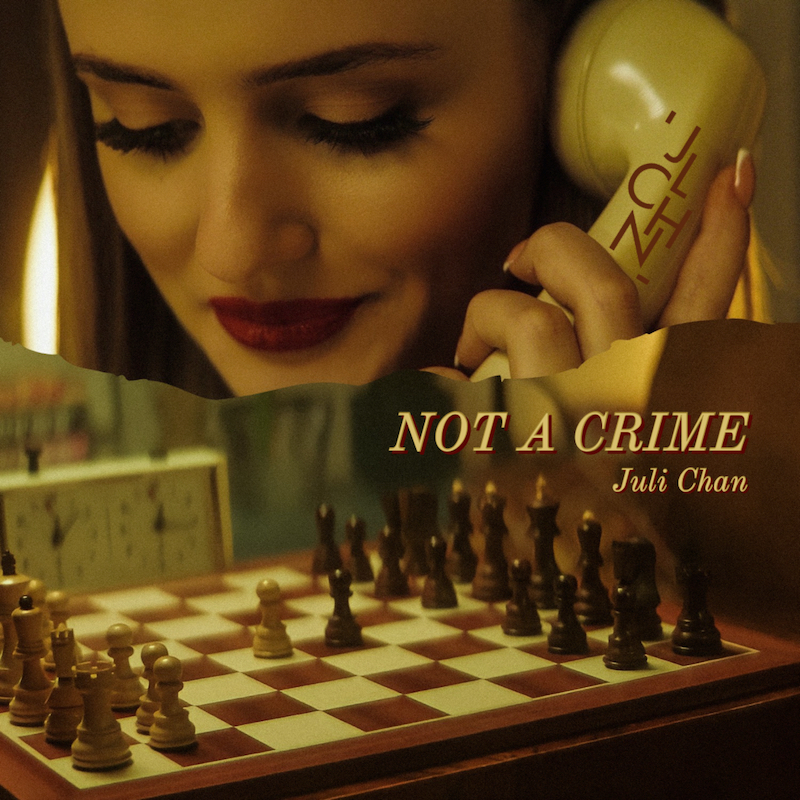 We recommend adding Juli Chan’s “Not A Crime” single to your favorite electro-pop playlist. Also, let us know how you feel in the comment section below. Mel Blanc’s famous catchphrase, That’s All Folks! Thanks for reading another great article on Bong Mines Entertainment – the hot spot for new music. Always remember that (P) Positive, (E) Energy, (A) Always, (C) Creates, (E) Elevation (P.E.A.C.E). Contact us on social media via Twitter, YouTube, Instagram, or Facebook, and let us know what’s going on. “Disclaimer: This post contains Apple TV and Apple Music affiliate links. We may earn an affiliate commission when you buy through links on our site.