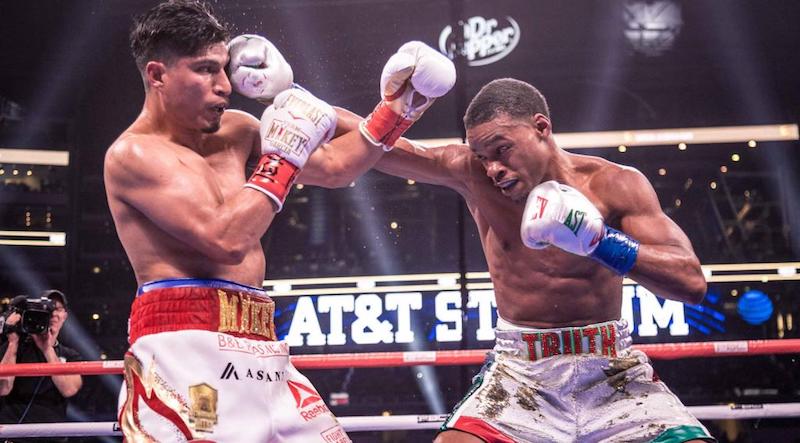 The highly-anticipated matchup happened in front of 47,525 adoring fans at AT&T Stadium in Arlington, Texas.

During the star-studded night, fans witnessed a one-sided beatdown and a superb display of boxing by Errol Spence Jr., who totally outclassed Mikey Garcia in every area of boxing expertise.

The decorated champion cruised to a lopsided unanimous decision victory over an overmatched Garcia who just couldn’t do anything offensively productive inside the square circle.

“From the whole training camp, the experts like Sugar Ray Leonard felt like he was too smart and I couldn’t box. You saw today I could box and move my head and do all that if I want to…The game is to be smart, it’s a sweet science. I had the size advantage and my reach. Why not use my jab and take something away from him that he likes to do which is use his jab too?” – Errol Spence Jr.

Going into the fight, Spence was the heavy favorite to win because he was the bigger and stronger fighter who some labeled the boogieman of the welterweight division.

Mikey Garcia also had a lot of support from some critics and fans who were picking him to outsmart Spence because they believed Garcia had a higher boxing IQ or ring intelligence.

But during the fight, Garcia’s boxing IQ couldn’t help him to land a solid combination because all night he was being tagged with an assortment of heavy punches thrown by Errol Spence Jr.

“All the credit to Errol Spence, he’s a great champion. He is the truth. He’s for real. He put up a great fight and executed the game plan so well. He kept the distance at his favor. I wasn’t able to really get my rhythm going. He did what he had to do; his reach, his height and the southpaw stance complicated things. I was trying to make adjustments but he was able to keep executing in his favor.” – Mikey Garcia

Comment below and let us know how you feel about Errol Spence Jr. authoritative decision win over Mikey Garcia. Do you think he’s the best pound-for-pound fighter in boxing right now?