Andi releases an emotional pop tune, entitled, “Get Your Attention”

Andi is an LA-based singer-songwriter from New Jersey. Not too long ago, she released an emotional pop tune, entitled, “Get Your Attention.”

Andi – “Get Your Attention” single

“I love to think that I’m overthinking it all. That you’re just busy and that’s why. You haven’t called me tonight; I’ll hate for you to know that I’m waiting here. I’m wrapped around your fingertips. Boy, you don’t know what I would give to not ruin the night when your name is said. Sneak off to cry when I’m out with my friends. There’s so much to say but until then, I’m gonna kiss someone else. Say, ‘It’s not about you.’ Pretend I don’t care, my arms aren’t around you. It hurts just a little that I won’t mention the things I would do just to get your attention.” – lyrics

‘Get Your Attention’ tells a heartfelt tale about a young woman who shares a problematic relationship with her significant other. Apparently, she believes they need an intervention because oftentimes she finds herself blowing up her partner’s phone too much. Later, she tells her companion, “I wish you knew about the effect that you have on my decisions and my life. That’s why I’m anxious all the time.”

‘Get Your Attention’ contains a relatable narrative and ear-pleasing vocals that will resonate well with music lovers. The emotive tune possesses piano-laden instrumentation seasoned with a tasty contemporary pop vibration. Furthermore, “Get Your Attention” follows mildly on the heels of Andi’s previously released single, “Devils Work,” which had 20,000 pre-saves on the piano-driven call to action on mental health struggles.

“I love to think that I’m overthinking it all.”

“This song was inspired by my intense breakups/crushes as a teenager. Anytime I liked someone they became my whole world. I would eat, sleep, and breathe that person. All of my thoughts and actions were surrounding them and ways to get them to like me back. I would do literally anything just to get one boy’s attention even if it meant losing friends or hurting my own feelings. I want other girls and boys who are going through their first crushes and loves to realize that they don’t need to do anything to get someone’s attention. Someone should like you for you and not a façade. Instead of going out and kissing everyone and hurting yourself in the long run, you should actually feel the feelings that come along with having a breakup.” – Andi explained

Andi may be new on the scene but she’s no rookie. She’s been singing from the age of six and writing songs since 11. Recently, she garnered nearly one million new TikTok followers since the start of the year and independently added 160,000 Spotify followers. At only 19, she has several anthemic pop smashes under her belt.

Andi’s young start with music and performance is the foundation of her connection with her rapidly growing fanbase. Not only did she go the more typical route of theater camp, but rather than cover her favorite songs, she wrote parodies of them. Andi has a goal of using self-awareness to connect with her fellow teens as she charts the trials and tribulations that come with her age.

“Get Your Attention” single 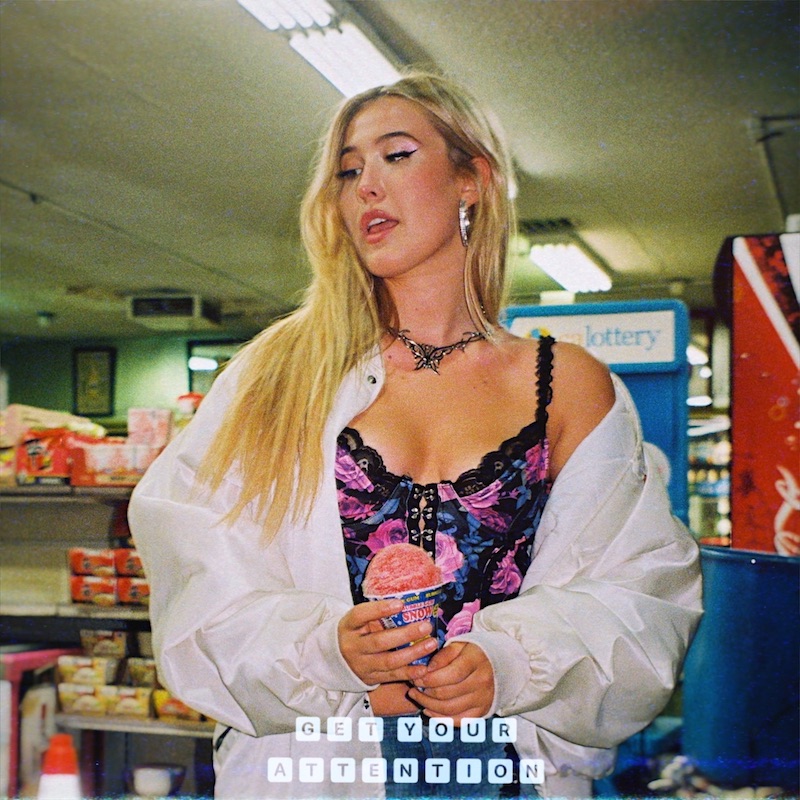 We recommend adding Andi’s “Get Your Attention” single to your favorite contemporary pop playlist. Also, let us know how you feel in the comment section below. Mel Blanc’s famous catchphrase, That’s All Folks! Thanks for reading another great article on Bong Mines Entertainment – the hot spot for new music. Always remember that (P) Positive, (E) Energy, (A) Always, (C) Creates, (E) Elevation (P.E.A.C.E). Contact us on social media via Twitter, YouTube, Instagram, or Facebook, and let us know what’s going on. “Disclaimer: This post contains Apple TV and Apple Music affiliate links. We may earn an affiliate commission when you buy through links on our site.