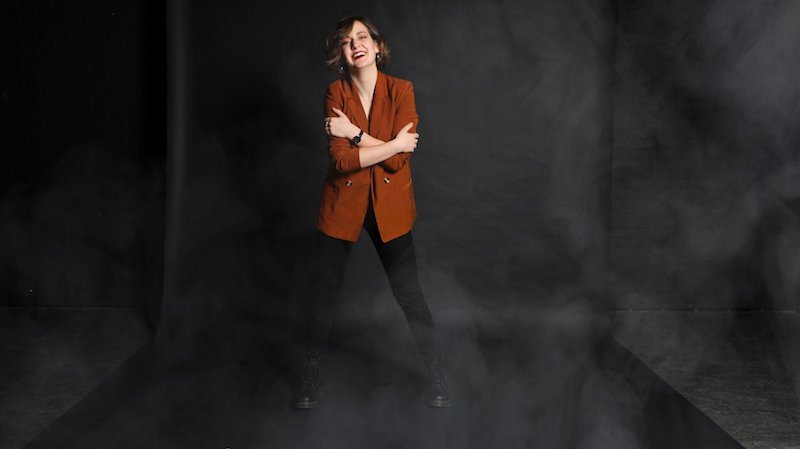 The Blockchains is a studio project of a music collective based in Cologne, Germany. Not too long ago, they released a playful debut single, entitled, “Videoblogger”, featuring singer Clara Lucas.

“I see a guy on the street stop a girl and say, ‘Excuse me.’ He said, ‘My friend’s a big fan, she watches everything you’re on.’ He said, ‘I know you’re a star, but we have already come this far. Just  wanna grab a quick snap and I’ll be off your back.’ Nothing’s what it seems now everyone’s a video blogger. The last thing that we need is another f**king video blogger.” – lyrics

“Video blogging has become the new reality TV. Interesting at the first glance but about as deep as a sheet of tracing paper. Trash video bloggers with their top 10 lists, double adverts, commercial breaks, and paid sponsorships are taking opportunities and attention away from genuine artists who’ve spent thousands of hours learning and practicing their craft, and that’s not funny or quirky. It’s downright annoying!” – Dave Knight

Dave Knight (a session musician, and songwriter from London) heads The Blockchains. Not too long ago, he penned “Videoblogger” a full calendar year before becoming involved in the most disliked video in German YouTube history, performed by Bibi.H.

Furthermore, Andrea Sausa filmed the musicians and their studio sessions in the famous Dierks Studios in Stommeln. Also, the short feature captures Dave and co-producer Guido Leidheuser piecing the track together which would ultimately be mixed by Stefan Vogt.

We recommend adding The Blockchains’ “Videoblogger” single to your personal playlist. Also, let us know how you feel about it in the comment section below.