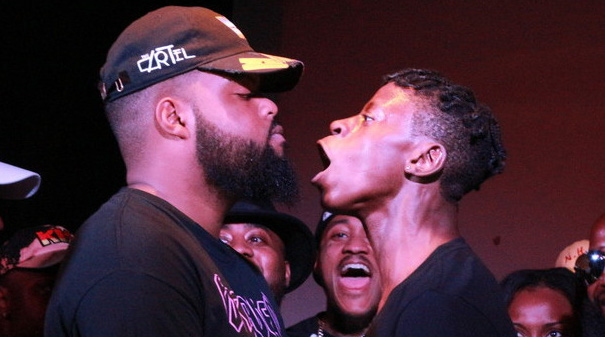 Th3 Saga versus Chess battle happened at URL’s #BornLegacy3 event. Going into the battle—critics and fans alike were wondering if Saga could preach a sermon that Chess would succumb to? Or get the respect of the young spitter using a Christian-based angle?

Chess more than survived Th3 Saga’s exorcism. And his gritty tales, poverty-stricken raps showed that the sinner from the congregation had struggled more in his young life than the older rap-reverend in the pulpit. Chess’ rounds hit home more. And at times, we felt like the roles were reversed, and Chess was the one giving the sermon.

But Th3 Saga delivered a decent message. At times, “His rounds were felt around the room like when Ray first went blind.”

But the rebellious spirit in Chess, “Knew that reverend knew he would make revenue over this.”

So, Chess refused to yield to the doctrine coming out of Th3 Saga’s mouth. He blasphemously told him, “I’m ya God ni^^a”, and the script was flipped. Now, instead of Th3 Saga saving Chess for Christ, Chess was the one doing the saving.