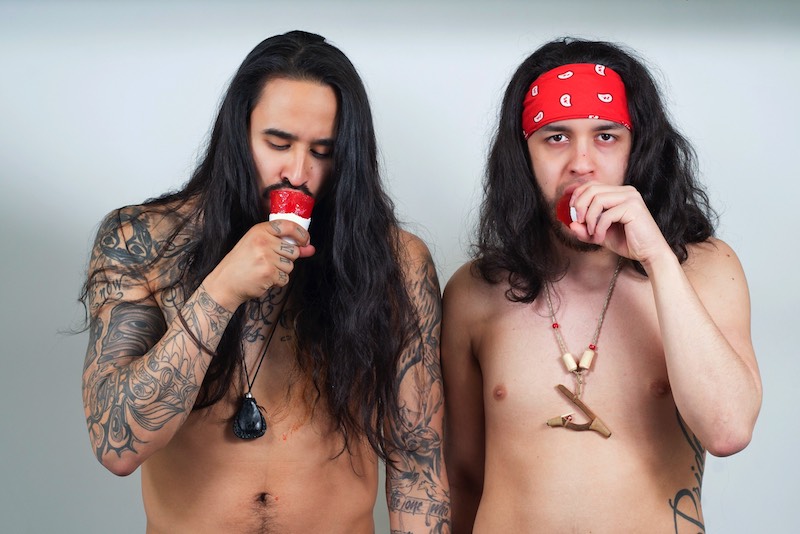 Snotty Nose Rez Kids is an alternative rap outfit from Vancouver, British Columbia. Not too long ago, they released a music video for “Creator Made an Animal”, a melodic rap tune from their upcoming “TrapLine” album featuring Boslen.

“Broke boy ambitions that was back then. Now I’m in a winner’s bracket paying taxes. ‘Cause the stairway to heaven isn’t really made of gold. No church in the wild so ‘Creator Made An Animal’. I’m thankful as f**k, I got both palms up, now my hands are full. We labeled as savage the label is native. We make it you make it, the future First Nations. Thank the Creator for all of these favors. Minay on the radar, we finally famous.” – lyrics

‘Creator Made An Animal’ tells an interesting tale where the offsprings of indigenous people and people of color decide to continue their traditions by staying true to their natural design.

“‘Creator Made An Animal’ carries aggressive and assertive energy that imitates the way society portrays indigenous people and people of color across Turtle Island. Our ancestors were stereotyped as savages, and we are often regarded as the pissed-off generation who haven’t gotten over what colonization has done to our lands and to our people. Through stylish delivery, we proclaim ourselves as the Father 7th Generation and let the world know that we aren’t changing for anyone. The future is ours!” – Snotty Nose Rez Kids

We recommend adding Snotty Nose Rez Kids’ “Creator Made an Animal” single to your personal playlist. Also, let us know how you feel about it in the comment section below.