Neoma (the artistic vehicle of Carla Huiracocha) is a Denver, Colorado-based singer-songwriter and producer from Cuenca, Ecuador. Not too long ago, she released a spectacular electro-dance tune, entitled, “Tears at Bae.”

‘Tears at Bae,’ Neoma reflected on its inspiration, calling it “…a fierce, empowering, “bad b*tch” song, inspired by a former lover and the end of a stagnant relationship.” The song, written in February of 2021, features a Mellotron synth sound inspired by “Strawberry Fields Forever,” a chorus stimulated by Metronomy, and disco violin strings influenced by the song, “Rasputin,” by Boney M.

Furthermore, “Tears at Bae” possesses all of the necessary emotions and ingredients that you would want in a dance tune. The undeniable song contains a groovy bassline and its rhythmic drum pattern hypnotically encourages listeners to bop along while two-stepping to Neoma’s enchanting bilingual vocal melodies. To add spice to the mix, “Tears at Bae” is a play on the words: tears at bay, and it finds Neoma trying her best not to cry amidst being heartachingly let go by her significant other.

On a larger scale, “Tears at Bae” serves as a tasty treat featured on Neoma’s upcoming sophomore album, entitled, HYPERREAL.

“HYPERREAL is the sequel to ‘Real.’ It is more intense, very hyper-pop influenced. The title is inspired by Lorde’s Buzzcut season hyperreal lyric: ‘Make-believe it’s hyperreal.’ Virtual relationships feel very hyper-realistic to me. ‘Hyperreal’ is the dual digital-physical reality of maintaining relationships over the phone. Some things can be real, but not enough.” – Neoma explained

The anticipated project is set to be released on April 29, 2022, via Soundbreaker Records. Also, the album is the follow-up (and sequel) to Neoma’s 2019 debut LP, “Real,” which featured her “Into You” single. HYPERREAL was heavily influenced by the likes of Kate Bush, SOPHIE (Neoma uses her sample pack on HYPERREAL), ARCA, Donna Summer, and SARAMALACARA. 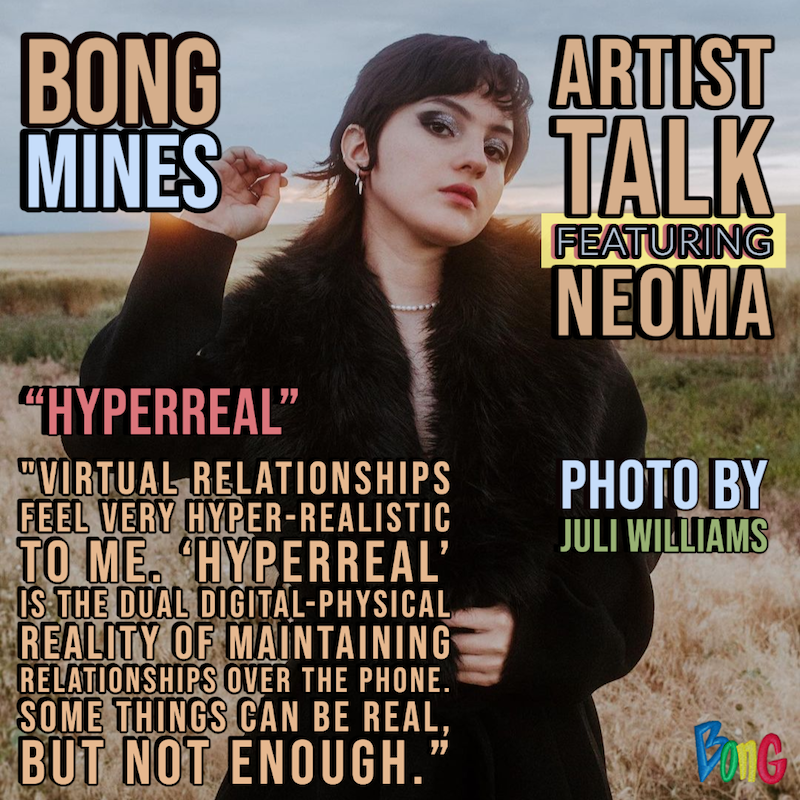 Neoma has captivated music lovers all over the world with her dreamy yet energetic electro-pop hits. In 2017, she hit the top of the Ecuadorian charts with her infectious single, Real. Since then, she’s played concerts to thousands of fans throughout the Americas.

In 2018, Neoma relocated from Ecuador to Denver, Colorado, along with producer/bassist, Danny Pauta (of Nockah and Vondye), to focus on her music career. In June of 2019, she released “Young,” her first single as a resident of Denver.

In November of 2019, Neoma released her debut album, entitled, “Real.” After that, she teamed up with local Denver musicians to form a live band. Levi Double U took over drumming duties while Aaron Wey of Civil Engineer joined on guitar. Later, Neoma embarked on her first tour of the United States in February 2020, and “The Real Tour” brought her through venues on the West Coast. However, due to the COVID, an appearance at SXSW and the Ecuadorian leg of the tour were canceled.

In quarantine, Neoma started collaborating with artists from the Ecuadorian indie scene and musicians she met while out on “The Real Tour.” Neoma released a string of collaborative singles in 2020, including “Superstar” with La Madre Tirana and “Cuando Quieres Jugar Conmigo” with Lolabum. Neoma once again hit the road in 2021, hitting the East Coast on the “FIXXION Tour.”

We recommend adding Neoma’s “Tears at Bae” single to your favorite electro-dance playlist. Also, let us know how you feel about it in the comment section below. Mel Blanc’s famous catchphrase, “That’s All Folks!” Thanks for reading another great article on Bong Mines Entertainment – the hot spot for new music. Furthermore, always remember that (P) Positive, (E) Energy, (A) Always, (C) Creates, (E) Elevation (P.E.A.C.E).