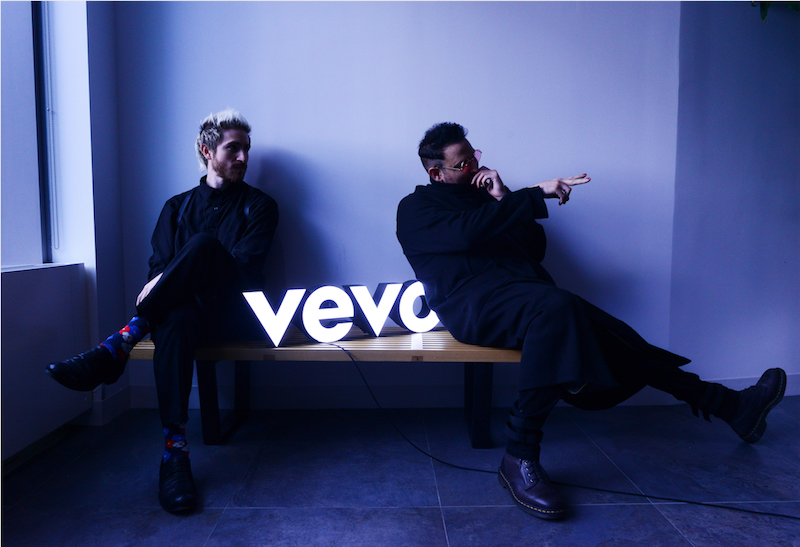 morgxn is an LA-based singer-songwriter with roots in Nashville, TN. Not too long ago, he performed his “home” single with WALK THE MOON’s frontman Nicholas Petricca at VEVO’s New York studios.

“‘home’ is a feeling you get when you’re with the people that understand you completely. It’s not always family. Sometimes it’s a lifelong journey to find the places and spaces where you feel most yourself. Joshua tree has always been a place I come back to. It’s one of the only places where the silence is so loud you don’t need to overthink it.” – morgxn

A 5-piece choir joined morgxn’s dynamic duet with Petricca as they perform their gorgeous stripped-down rendition of morgxn’s alternative hit tune, entitled, “home”. So far, the duet version is #24 on the alternative radio charts and its music video has amassed over 1.1M views on YouTube.

“When I first heard morgxn’s voice, first experienced his music, I knew instantly he was one of my all-time favorite artists. That was the night we met when he was Morgan with an ‘a’. And he was just sharing some demos he’d been working on. I was mesmerized by his angelic tone and his courageous ability to go deeply, darkly vulnerable.” – Nicholas Petricca

Not too long ago, morgxn and Petricca sang “home” for the first time, live at morgxn’s Lollapalooza debut performance earlier this summer. Shortly afterward, they went into the studio and turned their on-stage duet into an official collaboration.

“‘home’ is one of those first ideas he shared with me, and today I get to be a part of it with WALK THE MOON. This song is one of those universal stories to which any human being can relate. Personally, it reminds me of the new home I’m seeking to create for myself. The one without parents or training wheels. Where I can feel strong on my own.” – Nicholas Petricca

Not too long ago, morgxn released his debut album, entitled, “vital”. So far the project has amassed over 10M streams online and a Robert Smith-approved cover of The Cure’s “boys don’t cry.” In addition to that, his song “carry the weight” was the soundtrack to HBO’s chill-inducing “Share The Love” PRIDE campaign.

Get acquainted with morgxn’s music by checking out his “vital” album via Spotify.

The past year saw morgxn touring with Dreamers and Weathers, in addition to a performance supporting How To Dress Well. Previously, morgxn has toured with Phoebe Ryan, Skylar Grey, Miike Snow, and X Ambassadors.

We recommend adding morgxn’s “home” single to your personal playlist. Also, let us know how you feel about it in the comment section below.