Juliana Eye is an up-and-coming singer-songwriter from the suburb of North York, Canada. Not too long ago, she released a downhearted pop single, titled, “Late To the Party,” a POV experience of the burden of socializing while fighting depression.

“I wrote this song a few years ago, shortly after I decided to start putting out music. It was one of the special ones that just kinda wrote itself and I didn’t have to overthink it (and honestly… love that for me). I ended up shelving it ’cause it wasn’t feeling right, and I was going through a bit of an identity crisis trying to figure out what I really wanted to say and write about. A couple of years later, while choosing songs for my EP, I started to notice a theme of writing about growing up and feeling chronically late to life… like I’ve done so much but accomplished so little. So I decided to rework it and with the help of some friends, it finally found its place. I think ‘Late To the Party’ is pretty self-explanatory, but I hope that if there’s any takeaway, it’s that it’s always better late than never.” – Juliana Eye explained

‘Late To the Party’ is a melancholic yet euphoric song that Juliana Eye wrote about social anxiety and the impacts that depression has on one’s social life. The emotive song is an honest confession of feeling the need to mask your emotions in order to face the world when all you want to do is stay in bed and shut the world out. Juliana sings with passion, Now that I’ve burned every bridge from isolation and I don’t get invited no more. Every day, I rise to the occasion but I can’t get my foot out the door. “Late To the Party” serves as a tasty appetizer to what listeners can expect to hear on Juliana Eye’s upcoming debut EP, entitled, LATE BLOOMER, set to be released in early 2023.

“Gotta put on a face that ain’t mine.”

“You don’t always need to share every detail but giving close friends and family a heads up that you’re not in a good place mentally can be helpful for your own well-being. It’s okay to be open about what you’re going through.” – Juliana Eye stated

Juliana Eye embraced music during a period of rebellion at the age of 13, when she started writing songs in her bedroom. Later, she went on to perform across the local scene, worked as a session keyboard player, and toured Canada, the United States, and Europe. Juliana’s music is inspired by ‘90s and early 2000s alternative rock and post-punk aesthetics.

“Late To the Party” single 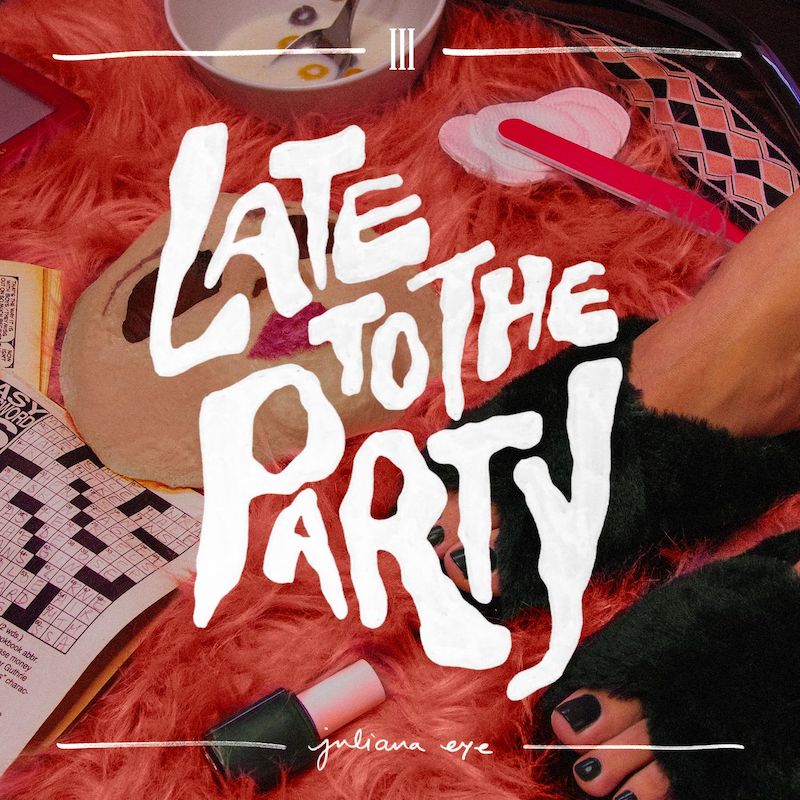 “I don’t know how many times, I wanted to stay in bed, pull the curtains down ‘cause I’m safer in my head. But the glow from my phone is making me restless and I know I should try harder. But I’m doing my best, can’t seem to get myself going ‘cause the tears that I’m crying just keep flowing. So, I’m gonna be late to the party. I need some time to dry my eyes. So don’t you wait up, I’m so sorry. Gotta put on a face that ain’t mine and if I tell you otherwise, I’m lying.” – lyrics

We recommend adding Juliana Eye’s “Late To the Party” single to your favorite contemporary pop playlist. Also, let us know how you feel in the comment section below. Mel Blanc’s famous catchphrase, That’s All Folks! Thanks for reading another great article on Bong Mines Entertainment – the hot spot for new music. Always remember that (P) Positive, (E) Energy, (A) Always, (C) Creates, (E) Elevation (P.E.A.C.E). Contact us on social media via Twitter, YouTube, Instagram, or Facebook, and let us know what’s going on. Disclaimer: This post contains affiliate links. If you make a purchase after clicking a link, we’ll collect a share of sales or other compensation.