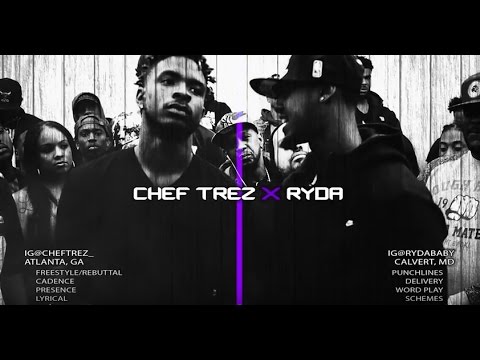 Chef Trez versus Ryda battle has emerged out of the “Smack—who are these ni^^as?” tier. And they have become two of the top-ten emcees in URL’s new PG class. Their bar-heavy battle at ‘The Hunger 2’ event on Nov. 6, 2016, was intense and packed with rebuttals and punchlines.

In the first round, Ryda raps.

“I said it’s no trace. This sh^t’s about to be a cold case. You don’t even know they got you next to the Killa—like the old Mase. Ya fam, gon’ be ‘Missing You’, but wait, that’s the old Case. So why Reepah Rell a ni^^a when I can sting em’ and paint the whole face. John-John gave you DNA. Blow gave you Magic. ni^^a you carry those traits, so how in the f^ck can a Chef teach me how to eat right when he ain’t never fix his own plate?”

A petty ni^^a like me homie, I don’t forget sh^t. I’ll wait ‘til you at the drive thru with ya fam and start loading up some big sh^t. Flintstones intro, cause he ain’t know what was at stake until I made the whip lift.”

Trez fires back with, “I’ll catch you talkin’ to a thot ni^^a, act cool, then flip modes and bust if Ry dig her. Don’t trip, we can fight outside, I’m too smart for you, he a monster? I’ll rock him in front of the building, now he a gargoyle. Put a pep in ya step or see assault without reasoning, you had ya run so now I’m spicing sh*t up. Here’s where ya season end. I’ma bring pain, I’ll be in ya city with a Louisville slugger, I don’t play games, you can get rock with a bat in Maryland ni^^a—CaveGang.

This is what shows that I am the better battle rapper and put me on top of ya. ‘Cause I’ma show you how to really bar about Prez Mafia. I say, this punk, b^tch ass ni^^a over there lookin’ soft, scary as f^ck, if I buck bet he get shook and fall, look at dawg, he not about the hands, he wouldn’t brawl, he’ll get the jab, jab, uppercut, the Prez Mafia too ni^^a, hook and all.”

Chef Trez’s and Ryda’s lyrical content remained consistent throughout the remainder of the battle. Also, many more paragraphs of quotable lyrics were articulated. Can’t wait to see these two emcees in action again.