Anna Bates is a singer-songwriter from Los Angeles, California. Classically trained in piano from a young age, it wasn’t until as recently as 2020 that Anna began to release music under her own name. After her track “Holy Smokes” went viral on TikTok, Anna packed up her Belmont dorm and moved back West to pursue a career in music. Not too long ago, she released an appealing music video for her “Holy Smokes” single via Neon Gold Records.

“If you’ve ever traveled down to Venice, California, you know that there’s a lot of this little herb we like to call “marijuana” floating around. I mean if you’re anywhere in LA you can probably follow the smell with your nose to the heart of Venice Beach. Also, down here are lots of men, complete with white linen pants, long hair, and exquisite seventies facial hair, all smoking – you guessed it – a lot of weed. Oddly enough, they resemble the historically inaccurate white Jesus. A weird visual crossover that I found too great not to write a song about. Thus, after this religiously comical revelation came ‘Holy Smokes,’ a song about the gathering of gorgeous pot heads that line the Venice paths.

Around the time I wrote this song, I was on the verge of quitting music as a profession altogether. I was going to take a job up in Yellowstone National Park, set music aside as a hobby, and I was going to become the greatest hermit that ever lived. As I was packing my bags, I uploaded a snippet of ‘Holy Smokes’ to TikTok and it gained a ludicrous amount of traction overnight. While I had been determined to settle down in the woods, it seemed that the making music portion of my life was not ready to be shut down quite yet. So, I declined the job in the mountains, and settled back down to write more tunes.” – Anna Bates explained

“It was an odd feeling to have people respond to such a wacky song. I received angry emails explaining exactly how I had just damned myself to a nice hot place in hell. I had dm’s praising me for humor and cleverness. This was the most commentary (good and bad) I had ever received on a song, from both strangers, friends, and family. As an introvert and a people pleaser, this was also the worst thing imaginable. So many people to respond to, and half of them were mad.

But through this, I realized I just had to write for myself. Which is, to this day, the most valuable lesson I have learned. Would I make some people angry with the songs I wrote? Of course. But why quit or try to please everyone, when truly you can not stop the haters (lol). ‘Holy Smokes’ is a fun folk piece. A song in which I hoped to paint a humorous visual of the beaches of Los Angeles. An ode to Venice potheads. Anyways, PSA: Jesus loves stoners too.” – Anna Bates explained 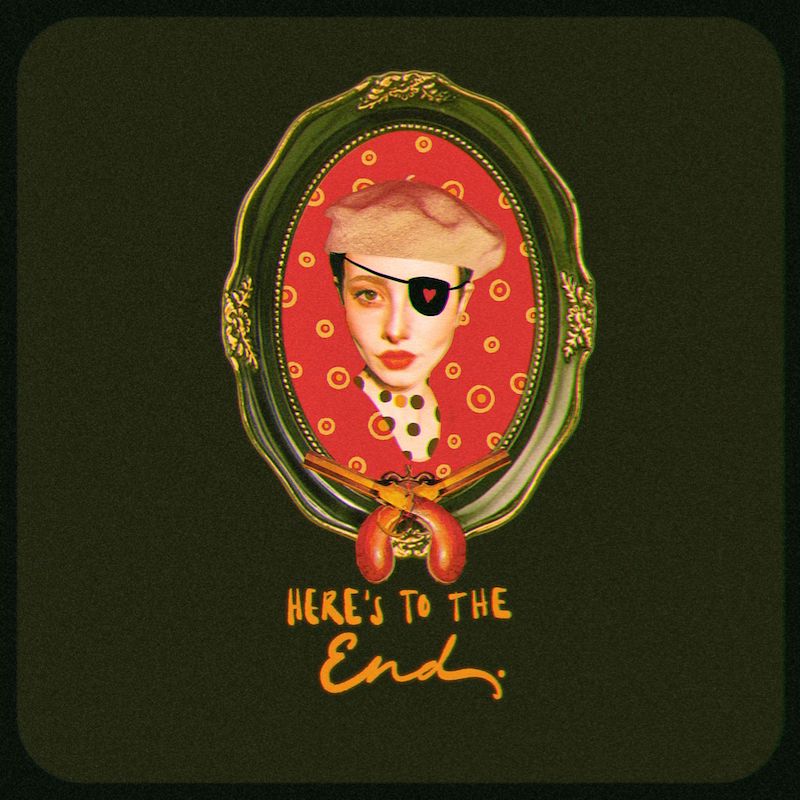 “Writing and creating my first EP, ‘Here’s To the End,’ was simply cool. Just kidding, it was a lot more than that. In fact, there are so many emotions attached to this little piece of art that it’s hard to mash them all down and condense them into one word – so I’m not going to. The songs on this EP are a mixture of stories I have created in my head. Exaggerated tales of my friends, personal expression, and the unpacking of my religious upbringing. It is a soundtrack to a road trip, or a campfire, or an awesomely epic mental breakdown.” – Anna Bates explained

“This was my first time collaborating with others to create a work of music and I could not have asked for better producers and writers to carry out my ideas and add their own. Los Angeles is truly filled with insane geniuses. What nobody tells you, is that the people you sit in a studio with for an infinite amount of hours to create, not only become connections but also become your friends and therapists as well. This EP and the people that helped make it rocket launched me into a new era of growth and writing and I am excited for it to be out in the world.” – Anna Bates explained

“In terms of production, I find it to be a tinge of folk, a pinch of ethereal, a dash of indie pop, a lot of caffeine, and a healthy dose of insanity. I cannot seem to cram it into one genre, which I love, because genres are outdated, and storytelling is in.” – Anna Bates explained

“My hope for the songs on this EP is that they will be carried with people through adventures and self-discovery. I hope that they will provide a sense of joy and inspire conversation between friends, strangers, the religious, the non-religious, the stoner, and the anti-stoner. There is something fantastic about words and exchanging them and gifting them, and my greatest reward would be to hear that people talked or felt open to discussion and joined in the community because of the songs on this EP. ‘Here’s To the End’ is a look inside my head. A collection of stories in EP form. A celebration. For if the end is coming, and it is, let us embrace it.” – Anna Bates explained

We highly recommend adding Anna Bates’s “Holy Smokes” single to your favorite alternative playlist. Also, let us know your feelings in the comment section below. Mel Blanc’s famous catchphrase, That’s All Folks! Thanks for reading another great article on Bong Mines Entertainment – the hot spot for new music. Always remember that (P) Positive, (E) Energy, (A) Always, (C) Creates, (E) Elevation (P.E.A.C.E). Contact us on social media via Twitter, YouTube, Instagram, or Facebook, and let us know what’s going on. “Disclaimer: This post contains Apple TV and Apple Music affiliate links. When you buy through links on our site, we may earn an affiliate commission.