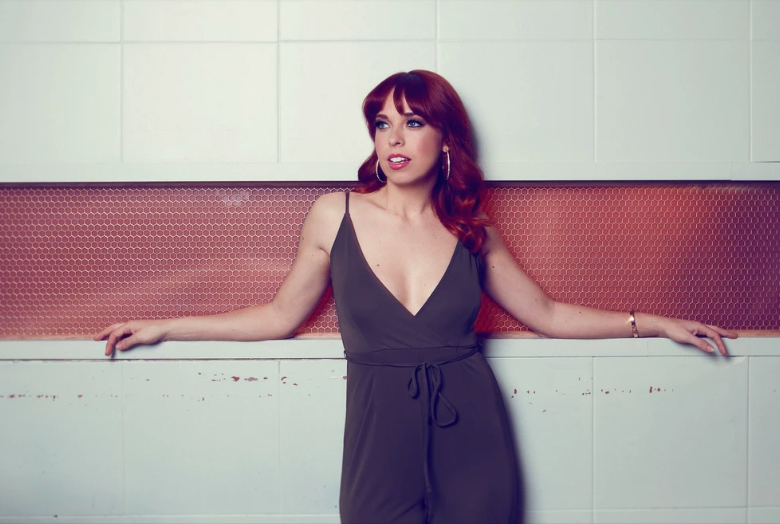 Stacey Kaniuk is a Toronto-based singer-songwriter. Not too long ago, she released a music video for “Baby Wants to Dance”, a ‘70s-inspired pop tune from her upcoming “Heartbeat” EP.

“I wanted to try something fresh and I wanted this record to feel bigger than anything I’ve ever done before. I had to get out of my own head and just have fun with it.” – Stacey Kaniuk

The Silent Partner Pictures-directed video finds  Stacey Kaniuk in a revealing red dress which matches her red-headed frame. Also, she performs and parties with enthusiastic dancers inside a 1970s’ roller-skating-dance-party embedded with smoke screen, spinning disco balls and descending confetti.

Stacey Kaniuk wrote her first original song at the age of 16, and a year later, she started playing covers in bars. Her first big break came when she and two other young singers formed the group, Take 3, which lasted a few short years.

In 2012, Kaniuk met Thom McKay at her Canadian Music Week showcase. The two creatives had an engaging conversation about their influences and her music.

“I kept his card for years after that with a note scribbled, ‘Call him!’— all because of that one conversation. When I received a FACTOR grant in 2015, I immediately contacted him. I knew he was the perfect fit for this project.” – Stacey Kaniuk

The approval from FACTOR, a non-profit which provides financial support for Canadian recording artists, was validation for Kaniuk, who was starting to become disheartened following her dream.

“Money is part of the reason I didn’t make another album after my first one. Doing music full-time can be a tough grind at the best of times, but having that support suddenly made it possible to just create the way I’ve always wanted to. Also, it allowed those in the various creative fields around the project to put their best work forward. Not just the musicians who played on the record, but the studio engineers, the photographer who captured the album art, the filmmakers and dancers in the music video. Getting this funding was a pretty big deal to me and that relief and freedom of expression flowed through everyone involved in the ‘Heartbeat’ EP.” – Stacey Kaniuk

“I just wanted to infuse the energy and joy of a kickass live show into every aspect of this record.”

Kaniuk and Thom took their time, making sure every part of the song and process felt good. They would often write together, trying out musical ideas. Stacey handling all the lyrics and continued working on the song at home. Also, the whole process was rooted around good vibes. Whenever they got stressed, they took a break until the music became their main focus.

We recommend adding Stacey Kaniuk’s “Baby Wants to Dance” single to your personal playlist. Also, let us know how you feel about it in the comment section below.