Sofia Evangelina is a multi-award-winning singer-songwriter from Vancouver, Canada. Not too long ago, she released a lovely indie R&B single, entitled, “Get Outta My Head.”

“I ride alone, nobody in my zone. Not to distract, building my act. You came along, got me singing to your song. What did you do, stuck to me like glue. Standards are high, I never compromise. But you magnetized, drew me into your eyes. Reality, or maybe a dream. Wake me up, I’m so fed up.” – lyrics

‘Get Outta My Head’ tells a heartfelt tale about a young woman who is madly infatuated with an individual who currently lives rent-free in her head. Apparently, she doesn’t know what to do with herself when she isn’t thinking about this person. For sure, she believes her head is stuck in the clouds, many miles away from the ground. Therefore, she admits, “I was just fine with how I draw the line. Heard your voice, now I’m lost in your noise.”

‘Get Outta My Head’ contains a relatable narrative and ear-pleasing vocals that will resonate well with fans of Evolsi, Neela, and A Girl Called Frank. The seductively textured tune possesses boomin’ bass-laden instrumentation flavored with indie R&B and contemporary pop elements. Furthermore, “Get Outta My Head” serves as a tasty appetizer to what listeners can expect to hear from Sofia Evangelina in the near future as she continues to release new music.

“‘Get Outta My Head’ was written and recorded during lockdown at age 17. Sitting in my room, I began to write about what it’d be like to begin to fall unwillingly and uncontrollably in love and all of the feelings that would follow. I tapped into my own experiences and those of my friends and others around me to tell a universal tale, a story simple in nature, yet complex as it takes us in the realm where the line between the dream, reality, memory, and illusion is very dim.” – Sofia Evangelina explained

Sofia Evangelina has won multiple awards, including an award for “Best Album” from the Young Artist Academy (previous winners include Miley Cyrus and Drake) and a “Rising Star” award from the LA Music Critics Awards, helping her reach under 1 million plays across streaming platforms.

Sofia was born in Vancouver to Russian and French parents. Now, she lives in Dubai. Her cultural development began when her mother brought her aboard the soul train to meet the greats, guiding her through a multicultural melting pot of Motown, Blues, Jazz, Soul, and R&B. This led Sofia to discover the musical film, “Burlesque,” starring Christina Aguilera. The famous singer/actress ignited Sofia’s passion for performance and set a musical standard that she has been dedicated to ever since. Also, Sofia has worked with Grammy-nominated producer, Roy Hamilton (Michael Jackson, Britney Spears, NSYNC, R. Kelly, Keri Hilson). Her Influences include Etta James, Aretha Franklin, and Nina Simone, while her own sound calls to mind Ariana Grande, Christina Aguilera, and Madison Beer.

“What can I do if I’m not thinking about you?” 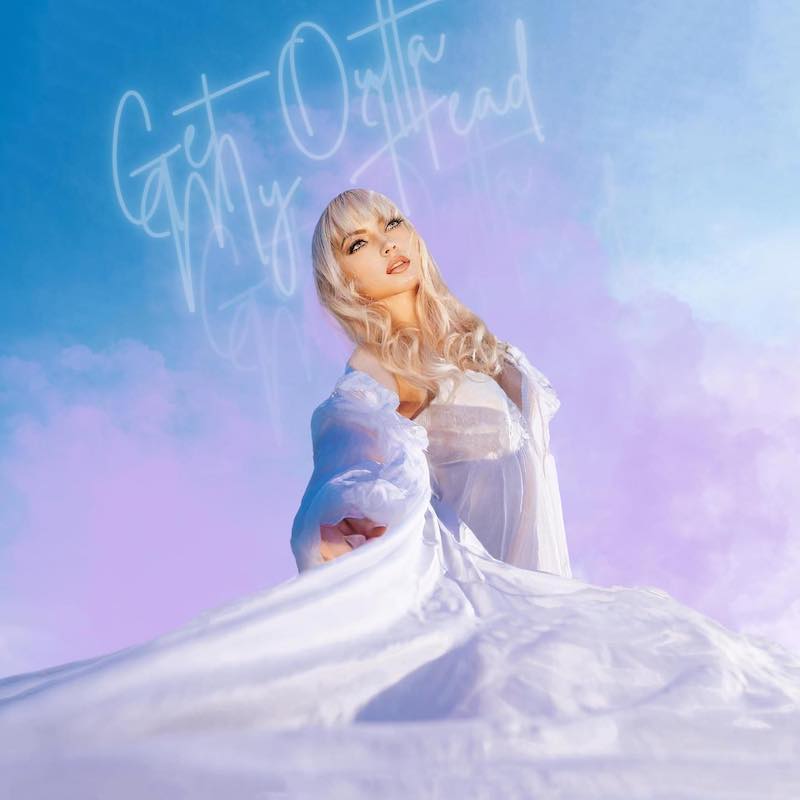 We recommend adding Sofia Evangelina’s “Get Outta My Head” single to your favorite indie R&B playlist. Also, let us know how you feel in the comment section below. Mel Blanc’s famous catchphrase, That’s All Folks! Thanks for reading another great article on Bong Mines Entertainment – the hot spot for new music. Always remember that (P) Positive, (E) Energy, (A) Always, (C) Creates, (E) Elevation (P.E.A.C.E). Contact us on social media via Twitter, YouTube, Instagram, or Facebook, and let us know what’s going on. “Disclaimer: This post contains Apple TV and Apple Music affiliate links. We may earn an affiliate commission when you buy through links on our site.