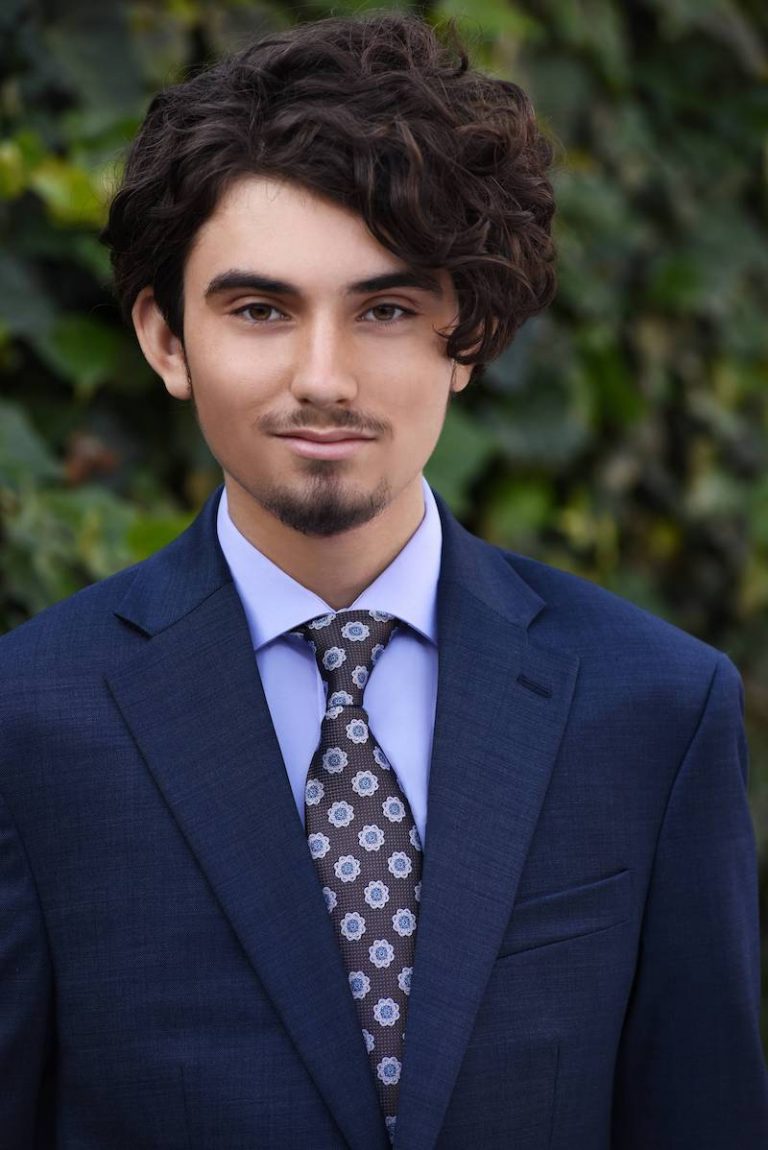 Samuel L. Siskind is a 16-year-old sophomore high school student. Not too long ago, he was commissioned to compose a reimagined Renaissance classic for the prestigious 2023 Golden Bridge Concert on Saturday, February 11, 2023, at 8 pm. Tickets ($40/$15) can be purchased at TheGoldenBridge.org and EventBrite.com, with a courtyard reception to follow.

The annual event, held at the 700-seat All Saints’ Church in Beverly Hills is performed by The Golden Bridge, the acclaimed vocal ensemble of 20 of the country’s finest professional singers. As its name implies, the 70-minute Golden Bridge Concert bridges and integrates 500 years of music, from the English Renaissance’s Golden Age to California’s present-day Golden Era of vocal composition and performance.

Siskind’s submission, entitled, “Out From the Deep,” is a stirring vocal soundscape in eight-part harmony, reimagined from the original Thomas Tallis masterpiece.

Suzi Digby and The Golden Bridge

“Suzi Digby is a magic maker, and being in the presence of her Golden Bridge concert is to be transported to another world where time shifts and angels are among us.” — Maggie Wheeler, actress: Friends, Ellen

“Samuel Siskind is the Mozart of Gen Z. At age 16, he holds the honor of being the youngest composer featured at the concert, edging out the previous title holder by a full two decades.” – Suzi Digby stated

The Golden Bridge is founded and conducted by Order of the British Empire (OBE) recipient Suzi Digby. One of the UK’s most dedicated music educators, Digby also served as the official choral conductor for the Rolling Stones’ live performances, and a judge on the BBC’s Last Choir Standing. She recently won her second Ivor Novello ‘Best Composer’ Award for one of her latest commissions, establishing ORA Singers (her U.K.-based group) as the leading commissioners of new choral music in the world.

“It’s humbling to have my work featured alongside these brilliant lifelong composers, and I’m excited to hear the masterful members of The Golden Bridge bring ‘Out From the Deep’ to life. I can’t think of a more meaningful event and inspiring setting to debut my work.” – Samuel L. Siskind explained

Siskind, who lives in Los Angeles’ Marina Arts District, works as a vocalist and composer. He is a 2022/23 fellow in the LA Phil Composer Fellowship Program and began musical training at six months old with the Music Rhapsody program for toddlers and infants. By age eight, he had already composed his first classical music piece.

As a composer, Siskind’s work premièred at Carnegie Hall and UCLA’s Royce Hall. Additional pieces in Siskind’s catalog have been recorded by producer, Matthew Wilder, at the iconic Capitol Records Studios, in Hollywood.

Siskind’s choral piece, “The Forest,” was selected by the CEO of the National Children’s Chorus to tour Asia in a concert series that included the Mapo Arts Center accompanied by the Arborvitae Chamber Orchestra in Seoul, Kyoto Concert Hall, and Santori Hall in Tokyo, Japan. The tour culminated in an internationally televised performance at the DMZ in collaboration with musicians from North and South Korea.

Siskind has steadily built a body of concert work, the latest being the choral commission by The Golden Bridge, Artistic Director, Suzi Digby. He enjoys skiing, and sailing, and is working towards his private pilot’s license. Also, he studies with his mentor, UCLA composition Professor, Ian Krouse. Not too long ago, he performed with select members of the National Children’s Chorus on the 2022 Grammy-winning recording Mahler: Symphony No. 8.

We recommend attending the prestigious 2023 Golden Bridge Concert on Saturday, February 11, 2023, at 8 pm. Also, let us know how you feel in the comment section below. Mel Blanc’s famous catchphrase, That’s All Folks! Thanks for reading another great article on Bong Mines Entertainment – the hot spot for new music and entertainment news. Always remember that (P) Positive, (E) Energy, (A) Always, (C) Creates, (E) Elevation (P.E.A.C.E). Contact us on social media via Twitter, YouTube, Instagram, or Facebook, and let us know what’s going on. Disclaimer: This post contains Apple Music affiliate links. If you make a purchase after clicking a link, we’ll collect a share of sales or other compensation.