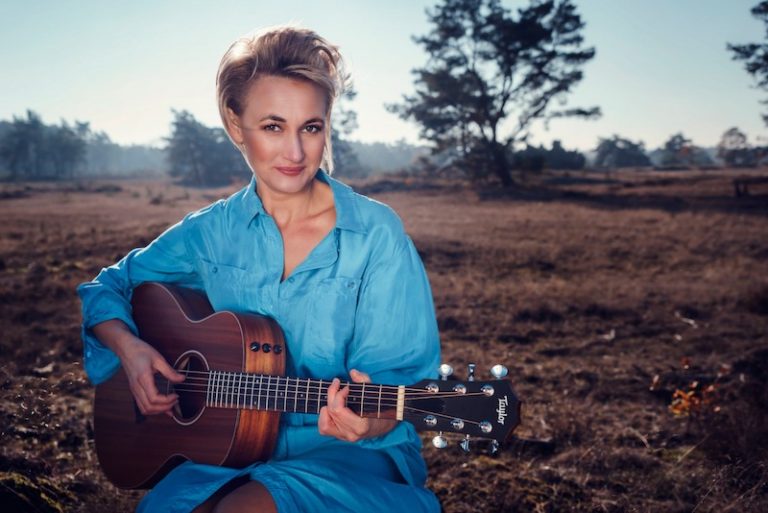 Pieternel is an Amsterdam-based singer-songwriter from the Netherlands. Not too long ago, she released a heartfelt indie-pop tune, entitled, “Ugly Beast,” produced by Benjamin Rheinländer.

“The maze of my worried mind. There’s danger ‘round the corner and I can’t hide. Still looking for this heart of mine, it’s been buried in the ground and it’s hard to find. Getaway train, it came in and it went away. God damn me, I was running but I was too late. Set me free, I can’t breathe. I got fear in my bones, it wears me out, it gets me low.” – lyrics

‘Ugly Beast’ tells a haunting tale about a woman who courageously faces her Demon, the ugly Beast that resides in her mind. Apparently, her body (in a state of fear) gets paralyzed whenever she stares into the Beast’s terrifying eyes. Later, the Beast tells her that she can’t sing, won’t ever find her voice, and she has no wings to fly to where she needs to be. Also, he tells her that she will forever be lonely and will never find someone to love. Hearing these hopeless statements makes her discouraged. Now, she doesn’t know what to think or feel because nothing feels real anymore.

‘Ugly Beast’ contains a relatable narrative, ear-welcoming vocals, and tuneful melodies that will resonate well with fans of Kacey Musgraves, Ashley McBridge, and Celine Cairo. The likable tune possesses guitar-driven instrumentation flavored with indie-pop, Americana, and modern folk elements. Also, “Ugly Beast” serves as a tasty appetizer of what listeners can expect to hear on Pieternel’s upcoming EP, which is set to be released in 2021.

“I am staring in the eyes of the ugly beast.”

“Spring 2019, I took a writing trip to my beloved Nashville, Tennessee. I gathered all my thoughts and started digging in my notebook. I found a lot of sadness and things I worried about. And I was writing one song every single day. But the thing I was struggling most with I had a hard time putting into words and music. I got the inspiration to write the song after reading a book that said sometimes facing your demons is the only way to win the battle. With this in mind, I sat down with Femke Weidema and Jon Reynolds. They allowed me to dig deep, shed tears, and to create the song that is my most personal song so far.” – Pieternel explained

Pieternel emerged on the scene in 2018 when she released the EP, entitled, “All Night Café.” She followed up with her debut album, entitled, “Roosevelt Island.” She created and released the project independently via her own label and presented it inside a sold-out Bitterzoet (a venue/club in Amsterdam). Before recording this album, she made frequent songwriting-trips to NYC and Nashville and fell in love with their vibrant music scene. “Roosevelt Island” was produced by Grammy-award winner producer, Femke Weidema, and Gouden Kalf’s winner, Helge Slikker. The album caught the attention of multiple international playlists and Dutch radio stations.

“After this trip, I experienced a burn-out and was still recovering when Covid-19 hit the world. Seeing the frustration, struggle, and grief of people not being able to continue their normal lives resonated with my burn-out period. I felt it was time to share my story. I hope my honesty, struggle, and perseverance will be recognized by others living in these uncertain times. ‘Ugly Beast’ tells how I could no longer fight the stresses of life and felt constantly in search of peace. Preventing this was a voice that kept telling me that I was worthless and would never find love. I’ve tried to be open about it in my personal life, on stage, and online. Not because I want to set an example or to ask for your sympathy or sorry. But because I’m looking for the human connection. You are not alone. Everyone that seems alright has a soul that’s hurting deep inside.” – Pieternel explained

Pieternel makes Americana music. Oftentimes, she mixes classic country music with modern pop and folk elements. With her soothing yet powerful voice, she shares stories of her inner world and paints intimate portraits of others. Her music parallels that of artists like Brandi Carlile, First Aid Kit, and Chris Stapleton. So far, she has opened for artists such as Brandy Clark, Levi Hummon, Angeleena Presley, and Helge. Also, she has played shows in the Netherlands and the USA.

“Sometimes I win, sometimes he does. When I lose, it gets to me too much. Sometimes, I’m scared I won’t find love. He’s the only one that I got. I can’t breathe, I got fear in my bones.” – lyrics

We recommend adding Pieternel’s “Ugly Beast” single to your favorite playlist. Also, let us know how you feel in the comment section below. Mel Blanc’s famous catchphrase, “That’s All Folks!” Thanks for reading another great article on Bong Mines Entertainment, and always remember that (P) Positive, (E) Energy, (A) Always, (C) Creates, (E) Elevation (P.E.A.C.E).