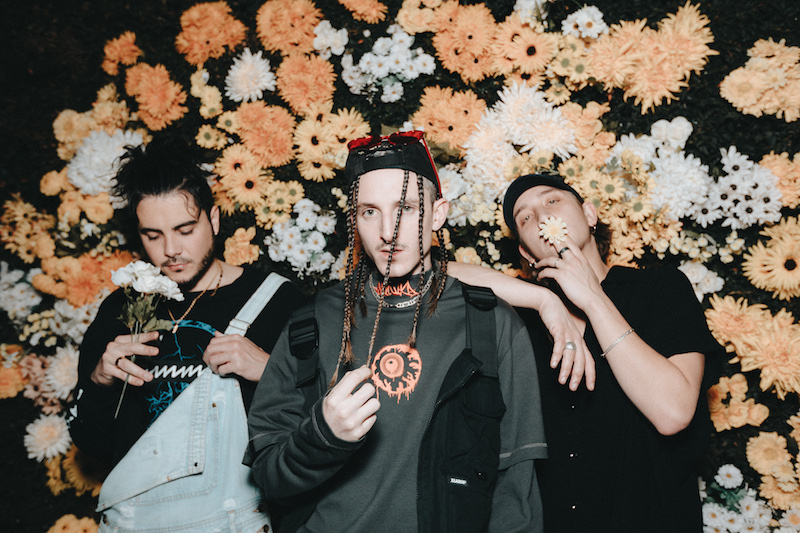 Chase Atlantic (Mitchel Cave, Clinton Cave, and Christian Anthony) is an LA-based trio from Northeast Australia. Not too long ago, they released a stylish lyric visualizer for their “MOLLY” single, via Fearless Records.

Been on and off my whole life, sh*t I’ve been nodding off the whole night. Why rip the heart out of my chest? Why waste your time, there’s nothing left inside. Driving through a city full of static, I was in a phantom dodging traffic. I said f**k the addy’s, f**k the Xanax. She was all I needed, she was magic. Molly, you were there for me when no-one ever cared for me. You tried, thank you for getting me high.” – lyrics

‘MOLLY’ talks about the euphoric highs and the crashing lows of love. The likable tune tells a passionate tale of a pill-popping young guy who shares a special attachment with Molly. Apparently, Molly has turned him into a full-fledged addict who feels totally sedated. Later, he realizes he has to give Molly up because she isn’t seeking his best interest.

“Molly, it’s the end for me, you’ll always be a friend to me for life.”

“There comes a time in nearly everyone’s life where they have to make the difficult decision of whether to hold on to a deteriorating relationship or let it go. Even though it’s the thing they love most. Love, whether it be for another person or a chemical compound, is constantly an uphill battle. At the end of the day, it’s up to us to decide whether or not that battle is truly one worth fighting. That being said, in some situations you just have to simply cut your losses and walk away. I hope we can still be friends.” – Chase Atlantic stated

Along the way, they canvased multiple continents, headlined across the US, UK, and Europe. Also, sold-out venues such as Webster Hall in New York, Kentish Town Forum in the UK, and The Regent Theater in Los Angeles. Plus, they’ve graced the stages at Bonnaroo, Lollapalooza, and Reading and Leeds.

“We’re on the same wavelength. We have the same outlook and that’s why we’ve been such great friends for such a long time. Our music-making is synergistic. We all share the same musical brain. Also, we make music that is hard to define by genre but easy to enjoy. To be where we are today with music as our career, having grown up without a lot, it’s one of the best feelings in the world. We went from staring at the same four walls for 18 years to seeing the whole world. We have to keep our heads—everything in moderation. Well, music-making should not be in moderation, but everything else. As long as we’ve got our headphones and laptops, we have all we need.” – Mitchel stated

We recommend adding Chase Atlantic’s “MOLLY” single to your personal playlist. Also, let us know how you feel in the comment section below.