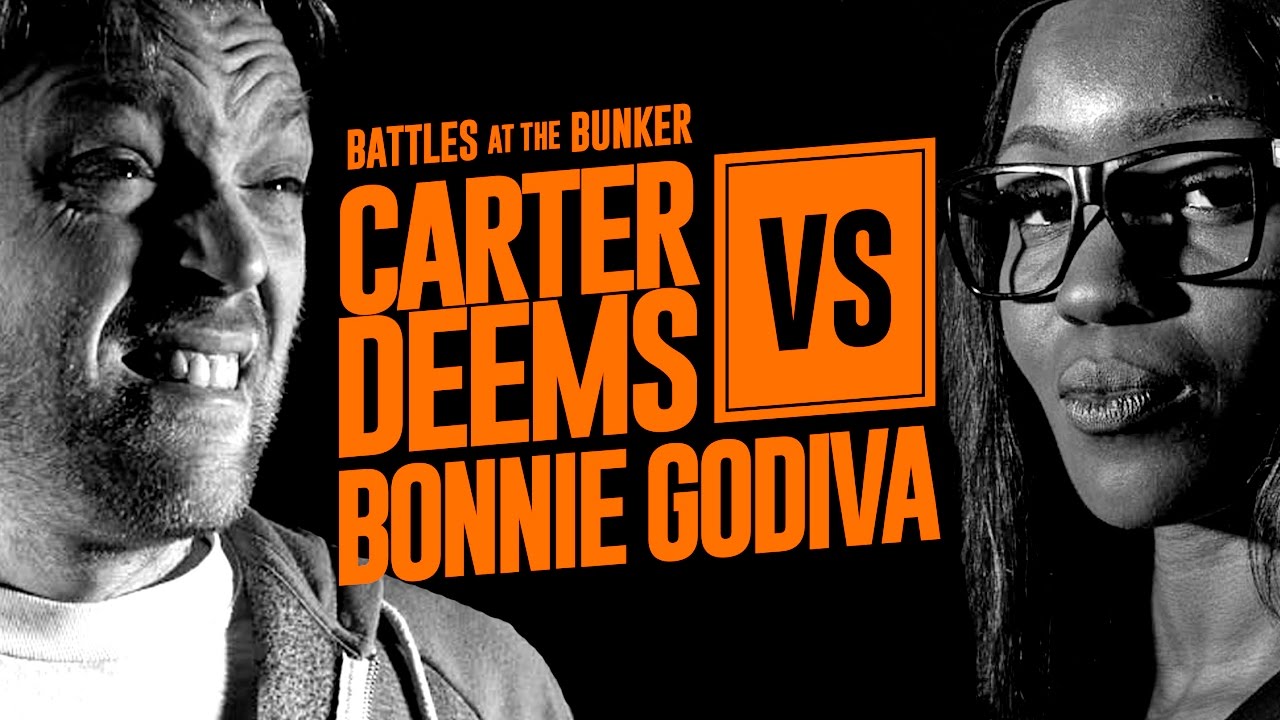 Carter Deems versus Bonnie Godiva battle was an extremely entertaining love match at KOTD’s Battle at the Bunker event in Los Angeles, California. The two emcees put up such a good showing that we wouldn’t mind seeing them go out on an actual date.

Carter raps first, and comes across as a submissive gentleman. A comical oddball who sees Bonnie as his dream girl. So, from the get-go, he hands her a bunch of yellow flowers. And Bonnie is seen cheesin’ from here to Timbuktu. Don’t front Bonnie, Carter had you opened.

“Now, it’s time to get this straight, is this a date? Are we gonna kiss today? Cause let me warn you, my breath isn’t great, my lips will shake like the hips on Justin Timberlake. I know we live in different states, but I’ll fly you out don’t worry about the ticket rates. I’ll put you in first class like when Professor X had a mental break and Mystique had just started shifting shapes.” – Deems

But Bonnie, all dolled-up, doesn’t fall completely head-over-heels for Carter’s romantic approach. Because she’s accustomed to receiving game from men who live a harder life than Carter does.

“I know I told you I wouldn’t be mean. But f^ck it, I’m takin’ you out. And after I beat yo’ ass tonight, you’re takin’ me out. You already bought the flowers. But I want dinner and candles too, b^tch I’ma handle you.” – Godiva

Carter showed Bonnie that she isn’t the only one who lived an unprivileged life.

“True story, I haven’t always been the hottest hunk. My first night of college stunk, my roommate met a girl, he brought her up. They started doing a lot of awkward stuff, poppin’ bottles, bottoms up. She just poured it, they ain’t even ask to borrow my cups. They passed me a beer they offered up, but even the smell of beer makes me wanna vomit stuff, plus I’m a chump who’s gotten stuck, listening to a Jeff Foxworthy CD, while they did weird stuff on the bottom bunk. So, don’t act like my life is not as tough” – Deems

Bonnie realized she’s dealing with a man that’s not taking no for an answer. So, she takes off her jacket, and her boobs are making Carter feel uneasy in his suit and bow tie. Then, Bonnie untangles her braided hair, and it drops down to her rear end. Unfortunately, the camera blocks that image.

“I only got one question for you, you ever seen a p^ssy that likes to get wet, Carter? Don’t be nervous, I’m schoolin’ you off the top, Head Starter.” And then later, “I mean, what you doing later tonight, Carter? I heard the way you eat p^ssy and it’s getting’ me open see. Like right now, I’m supposed to be lyrically beatin’ you openly. But I heard you got a seizure tongue and now I’m conflicted emotionally. I even wrote a prom punch for you. Hold up I’m a lil nervous. After these punchlines, Deems would you go with me? I mean, I’m not asking, I’m thinkin’ later I’ll meet you in hosiery. At Whole Foods, where the crème and the lotion be. And like a bad kid in public, before you check out, I’ll have you eating the groceries.” – Godiva

At this point, there’s no turning back for Carter. Bonnie is practically throwing herself at him. So, he steps in for the kill.

“I’m not here to overload you with hatred. Being mean is so overrated. That was in the past, and you’re done with Math. So, me plus you is the only equation. And I know it’s so amazing. I wanna be more than buds. So, I rose to the occasion.” – Deems

Right after that line, Carter walks over to Bonnie with a corsage, and then he asks:

“Is it okay if I pin this to your shirt? See, you’re supposed to ask someone before you touch them for permission first.” – Deems

The audience applauded, Bonnie agreed, and Carter earned one of the coolest points in battle-rap history.