Armaan Malik releases a cinematic audiovisual for his “You” single

Armaan Malik is a 26-year-old multilingual, international singer-songwriter from India. Not too long ago, he released a cinematic audiovisual for his “You” single, which emulates a message worth embracing.

​​“‘You’ is one of my most favorite songs I’ve released to date. It’s got a certain purity and simplicity that I believe will speak to a lot of people. I’ve always wanted to do a love ballad in English and ‘You’ definitely is a no-brainer in that genre. The song has been in the works for almost two years now which is why I am extremely excited that it’s finally out there in the world for people to hear and make their own. I hope all my fans and the new listeners love the song as much as I do.” – Armaan Malik explained

‘You’ portrays the warm fuzzy feeling of finding your special person – the one you’re willing to take that leap of faith for. The lyrics are meant to define the magic of a true, butterfly-inducing, once-in-a-lifetime kind of love. The kind that makes you want to fight against all odds – including everything life throws at you. 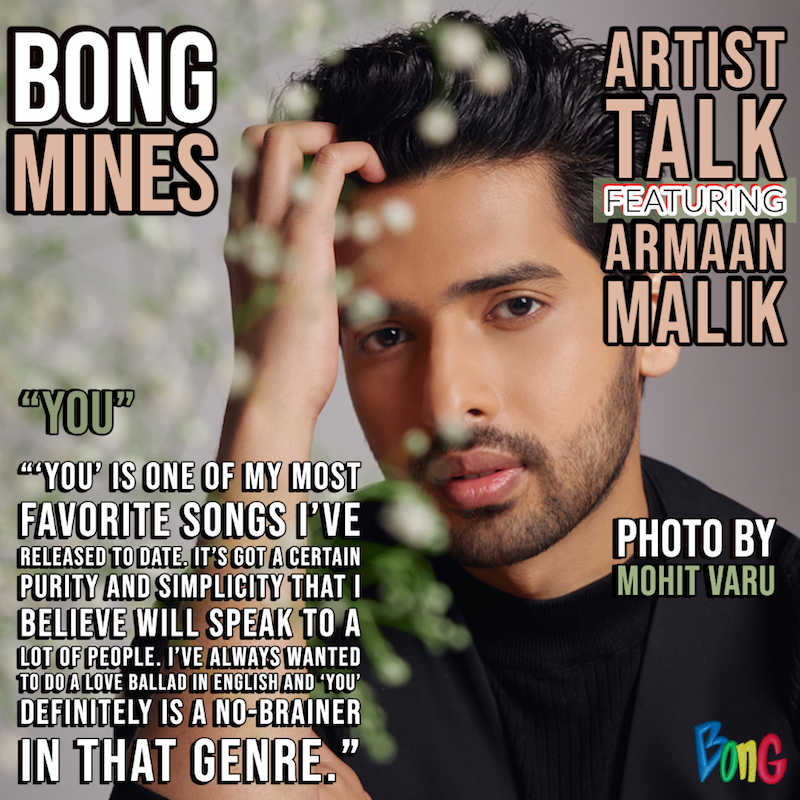 ‘You’ contains an evergreen narrative, ear-pleasing vocals, and soothing melodies. The nostalgic tune possesses acoustic guitars and string-laden instrumentation bursting with contemporary pop and acoustic undertones. Furthermore, “You” marks Armaan Malik’s 4th solo English single, which showcases a softer side of his voice compared to his previous Global releases.

In 2021, Armaan Malik was crowned as “One of India’s most talked-about musicians on Twitter.” Also, he is the first singer of Indian origin to be featured on the Spotify Times Square billboard in New York. To date, he has garnered over 10 billion streams for more than 250 songs in a dozen different languages. Plus, he has accumulated over 50 million followers who have christened themselves as Armaanians worldwide.

Last year, Armaan Malik infiltrated markets all across the globe with the release of “Echo,” a collaboration with Korean American artist, Eric Nam, and platinum music producer, KSHMR. So far, “Echo” has accumulated over 27 million views, charted on over 20 New Music Friday playlists, was the #1 Dance song in India, and charted in 10 other countries.

After cementing his position in the Indian music industry, Armaan has now forayed into the global music circuit with his MTV EMA winning debut English single, “Control,” followed by Billboard’s Top Triller chart-topping, “next 2 me” and “How Many.” Those successes enabled Armaan to become the first-ever artist to have achieved this feat twice within one year.

Armaan Malik is the youngest singer of Indian origin to have performed at The SSE Arena, Wembley, London, and to become the winner of the SSE Awards Live Act. Also, he was the voice of Aladdin in the Hindi dubbed version of the live-action remake of the Disney classic, “Aladdin,” and the singing voice of Simba in “The Lion King.”

We recommend adding Armaan Malik’s “You” single to your favorite contemporary pop playlist. Also, let us know how you feel about it in the comment section below. Mel Blanc’s famous catchphrase, “That’s All Folks!” Thanks for reading another great article on Bong Mines Entertainment – the hot spot for new music. Furthermore, always remember that (P) Positive, (E) Energy, (A) Always, (C) Creates, (E) Elevation (P.E.A.C.E).