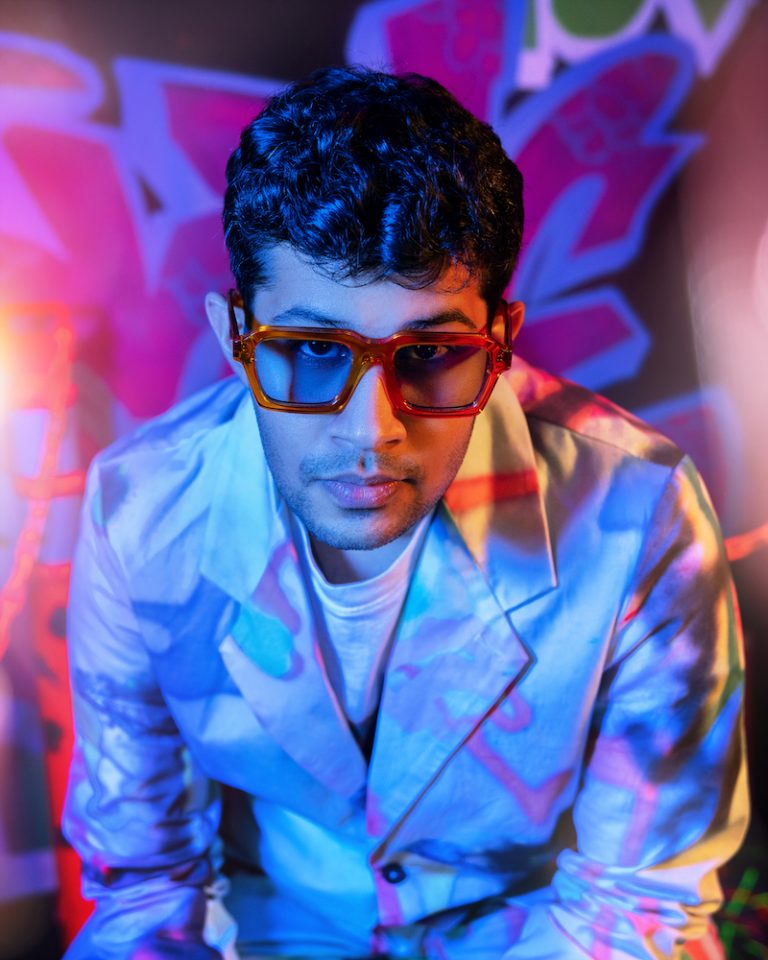 AIR APPARENT (Neil Sethi) is an Indian-American DJ/producer from Atlanta, Georgia, now based in San Francisco. Not too long ago, they released an adorable pop tune, entitled, “100%,” featuring ÊMIA, the project of Brooklyn-based Vietnamese-American singer-songwriter and producer, Anh Le. Also, the song features a rap verse from the rising artist, Reo Cragun.

The video, directed by Mood Infinite (Jeff Wu) and Kelsey Tang, brings AIR APPARENT into a lush sanctuary where time stops and the relationship becomes imaginary, filled with textured glitches mixed with an ominous version of reality. Also, the video incorporates the digital glitches of the actors to mirror the disconnect in the relationship.

“The visuals behind ‘100%’ follow a girl who retreats into a sanctuary of memories with her former partner, but finds that what she thought was love was really a delusion. We wanted to highlight the turbulence of the relationship reflected in the lyrics. We merged throwback digital textures and a fantastical location to transport viewers into a space where time stands still — eerie and charming was the vibe we were aiming for.” – Jeff Wu explained

‘100%’ explores the nuances of a failed fling that could have been meaningful if only both parties were willing to put in the effort and commit. The warm, sunny tune contains a relatable narrative and ear-pleasing vocals that will surely resonate well with fans of NAO, Melanie Martinez, LION BABE, and Scarlet Pleasure. Also, “100%” possesses melodic instrumentation flavored with contemporary pop,  indie R&B, and electro-pop elements. Furthermore, the song serves as a tasty appetizer to what listeners can expect to hear on AIR APPARENT’s upcoming album, entitled, CHROMATIC, available in the summer of 2022.

“It wasn’t until late stages that we realized a rap part would really take it to the next level. I was super lucky to connect with Reo Cragun, an amazing rapper and songwriter offline. And he was down to build out a rap section to expand the song. Reo’s verse added both melodic elements and a whole new dimension to the story, sharing a self-reflective take on how ‘the other person’ in the story might feel after it didn’t work out with the main character.” – AIR APPARENT explained

AIR APPARENT draws inspiration from a variety of artists including James Blake, Japanese Breakfast, and Vampire Weekend. He continues to fuse together a myriad of genres. Recently, he dabbled into the realms of electro-pop and indie, echoing the likes of CHVRCHES and Purity Ring.

“I wrote ‘100%’ with one of my favorite writing partners, Teresa Tuan and Anh Le (ÊMIA) in Brooklyn. We were talking about the nearly universal experience of someone we know, may have dated, or may have briefly had a thing with trying to slide back into our messages. We’ve all experienced it. When one person is willing to give everything for someone while that someone has remained unwilling to commit. Weeks, months, or even years later. Somehow that someone always comes back around with a change of heart…when it’s far too late.” – AIR APPARENT explained

AIR APPARENT began crafting tunes back in 2017; his first being, “Before It Gets Dark (Unfold Me),” featuring vocalist, Michelle Lu. After three successful single releases that year, AIR APPARENT released his debut EP, entitled, “Imaginary,” in 2018. A steady stream of singles and a seven-track sophomore EP, “Color Dreams,” followed in 2019. Since then, AIR APPARENT has consistently polished his unique signature sound release after release. His latest electro-pop production serves as his most innovative musical endeavor to date.

“What kind of situation do you think we’re in?”

“More importantly than the individual song, I really want to help bring more of an Asian identity into popular music. Nearly every culture has rich musical traditions but somehow Asians still constitute a tiny minority among musical artists in America. In addition, among many of my Asian peers, we’ve found that creative careers like making music are often perceived in the culture as career choices that are nonviable at best and lazy at worst. I hope that by creating great music, I can help raise awareness of other identities and experiences in the music industry. Also, I hope to encourage others to showcase their art.” – AIR APPARENT explained

We recommend adding AIR APPARENT’s “100%” single to your favorite contemporary pop playlist. Also, let us know how you feel about it in the comment section below. Mel Blanc’s famous catchphrase, “That’s All Folks!” Thanks for reading another great article on Bong Mines Entertainment – the hot spot for new music. Furthermore, always remember that (P) Positive, (E) Energy, (A) Always, (C) Creates, (E) Elevation (P.E.A.C.E).